This article supplements an archived article in the fall 2010 issue of Oregon Small Farm News: http://smallfarms.oregonstate.edu/sfn/f10wintercovercrops. That article discusses cover crop species, and time of seeding and includes a table of cover crop seeding rates. Here I discuss options for preparing a cover crop seedbed and seeding methods for relay seeded cover crops intercropped into an existing vegetable planting, or seeded after the vegetable crop is harvested. I explain the importance of adequate soil moisture and the rapid early establishment and provide links to additional information on no-till or reduced tillage strategies.

Tillage and cultivation have pros and cons. It controls weeds, loosens the soil, breaks up clods, can be used to create fine seedbeds, and can help dry and warm soil in the spring. On the other hand, it breaks soil aggregates apart, disturbs soil biology, and compacts soil over the long term. When tillage is necessary, try to avoid tilling soil that is too dry (i.e. dusty) or too wet (i.e. smears or sticks excessively to equipment). Soil aggregates can be badly damaged and soil is easily compacted when soil is tilled too wet. When soil is tilled too dry, it often doesn’t work up well, and fine aggregates can be turned to dust and become prone to wind erosion.  If soil is too dry, pre-irrigation before seedbed preparation can make cultivation more effective. Late summer and fall is usually the best time to subsoil in order to break up hard pans created by previous tillage and heavy traffic.

Crops leaving modest amounts of plant material after harvest, like summer Brassicas, salad greens, and cucurbits can be incorporated with a disc. Usually, little additional field preparation is needed before seeding.

Sweet corn and some other high residue crops like small grains can provide effective soil cover and wildlife habitat over the winter. If you have a thick canopy left after harvest, consider leaving it in place over winter. If you want to seed a legume cover crop for nitrogen (N) after a sweet corn crop, mow the stalks before they dry down too much to decompose easily. Then cultivate with a heavy cover crop disc and allow the residue to decompose for a few weeks. Then disc lightly again before cover crop seeding. Relay seeding into late sweet corn is also worth considering.

Relay seeded cover crops are broadcast over young, well-established cash crops. Relay covers must be seeded early enough so that light reaches the soil surface for long enough to allow the cover crop to establish well. The cover crop seedlings have to survive shading during late summer and the traffic and disturbance of harvest. SARE’s publication Managing Cover Crops Profitably reports that on a scale of 1-4 for shade tolerance, annual ryegrass, wheat, and crimson and red clover rate 3 (very good), barley, wheat, brassicas, and hairy vetch rate 2 (good). Have a look at the information-packed cover crop tables on pages 66-72 of the book.

The best timing for relay seeding varies. One rule of thumb is at the last weed cultivation. This can sometimes be a bit too late for good cover crop establishment if the cash crop subsequently creates a thick, dark canopy (i.e. winter squash). I currently try to relay seed when the light will still reach the soil surface for 4-5 weeks. Cover crops can be seeded into the alleyways, and not the crop row, between some crops with wide row spacing (i.e. trellised tomatoes).

Make sure the field is irrigated frequently enough after seeding for the cover crop to establish. Young cover crop seedlings are more susceptible to drought stress in mid-summer than established summer vegetables. I normally increase cover crop seeding rates at least 1.5x when relay seeding. 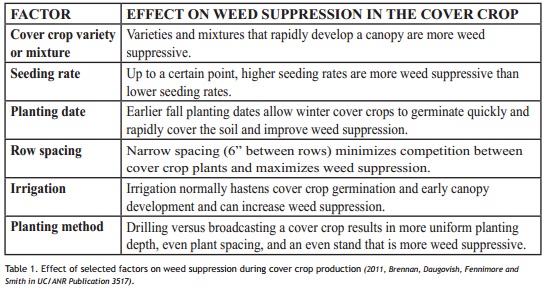 When summer vegetable harvest is over before early October, there is usually time to get a cover crop well established in the fall. If you have a lot of nitrogen left over in your soil (i.e. more than 20-30 ppm nitrate-nitrogen in 12” deep fall soil sample), it is helpful to plant a cover crop that will put on 8-12” of shoot growth before heavy fall rains begin. Cereals are especially effective at scavenging nitrogen and preventing excessive nitrates from leaching into groundwater. For more information see: Nitrogen Scavenging: Using Cover Crops to Reduce Nitrate Leaching in Western Oregon (EM 8728). If nitrogen scavenging is your primary goal, consider using a seed mixture that is predominantly cereal or grass. Some legumes in the mix will help prevent nitrogen immobilization the following spring if you plan to let your cover crop grow to late the vegetative stage (i.e. flowering or just before flowering). In our experience, 15-20% of legume biomass when the cover crop is terminated can prevent nitrogen immobilization. Young cereals and grasses that are terminated when tillering (Zadock’s growth stages 20-30) are unlikely to immobilize nitrogen. As they mature through jointing and stem extension to heading (Zadock’s growth stages 30-60), the risk of nitrogen immobilization increases, and legumes are especially helpful in preventing this.

If you hope to optimize biological nitrogen fixation for the following vegetable crop, use legume cover crops to supply 40-100+ lbs/ac plant-available nitrogen. Crimson clover or vetches (i.e. common vetch) perform well on their own or in mixtures with cereals. I normally use about the same legume seeding rate in mixtures as in single species stands, and reduce cereal seed rates to 20-40% of the solo rate.

The seed drill resulted in the most even and dense cover crop stands. Of the broadcast treatments, the rototiller provided the densest and most uniform stand. Brennan and Leap recommended increasing seeding rates by 50-100% when broadcasting compared to drilling seed. Most seedlings emerged from about ¾” below the soil surface in the drilled cover crop, 1½ - 2½” in the rototilled cover crop, ¾” in the Perfecta cultivated plots, and ¾ - 1½” in the disced cover crop.

Brennan and Leap conducted this research in loamy sand soil. They explain that “the rototiller would be less suitable than the (Perfecta) cultivator for small-seeded cover crops such as mustards (or clovers) that are less tolerant to deeper planting depths than cereal grains and grain legumes (i.e. vetches and peas) used as cover crops. Deeper seed placement by the rototiller would likely be more problematic in clay-textured soils that are known to inhibit emergence from deeper depths.” (comments in parentheses are mine). We regularly use a ring roller to successfully incorporate cover crops after broadcasting in silt loam and silty clay loam soils but have not compared these stands to drilled cover crops.

Well-managed cover crops can reduce weed problems. However, some weeds can set seed before the cover is terminated. The critical period for weed suppression in the cover crop is the first 30 days of establishment 1. Cover crops with a dense canopy early in the season (i.e. cereal rye and mustards) intercept more light and compete well with weed seedlings.  Table 1 lists key factors affecting cover crop weed suppression.

Many growers wait until fall rains begin to plant cover crops. Sometimes this works out, but if irrigation is available, it often ensures quick establishment, better weed control, nitrogen scavenging, and eventual spring biomass. Average rainfall over the last 10 years in Portland was 1.2” in September, 3.1” in October, and 5.8” in November (data from Western Regional Climate Center). The worst-case scenario for dryland cover crops is rain at seeding followed by a hot and dry spell. The cover crop will germinate and then die. Another risk is that sufficient rains don’t arrive until late October or November. This is too late for cover crops to provide enough cover to prevent erosion and protect soil aggregates from the impact of raindrops over the winter. Nitrogen scavenging is also poor, and some weed species are better adapted to sporadic soil moisture than most cover crops, so weed management by the cover crop could be compromised. 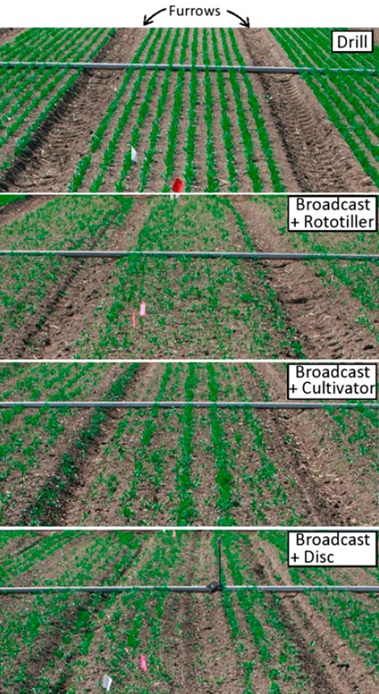 If your soil is moist after irrigating the summer vegetable, you might be successful in drilling the cover crop seed deep into moisture and waiting for fall rain. I recommend irrigating your fall cover crops as needed because the benefits are probably worth the cost of irrigation. Cost estimates from the OSU Organic Fertilizer and Cover Crop Calculator indicate that a cover crop might cost about $140 per acre to manage, including seed, labor, fuel, and equipment depreciation. If two irrigations cost about $35/ac including labor to set the lines and electricity, the cost of irrigation is only 25% of the total cost. Considering the benefits of good cover crop canopy cover and biomass going into the winter, I think this is a good value.

No-till and reduced till cover crops

If you are interested in reduced or no-till cover crops, be sure to select cover crop species that will flower early enough in the spring so you can terminate them with rolling and crimping or flail mowing. Researchers at Washington State University Extension are studying organic reduced tillage systems west of the Cascades. This video and eOrganic article discuss some of their work: