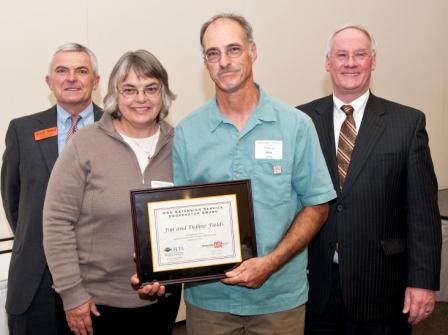 Jim Fields can’t help but grin when he points out the strategically placed grain silo on his farm. During the Central Oregon housing boom, the silo served as a beacon to land developers that his property was not for sale.

Today, it symbolizes much more as it towers over the ten-acre farm east of Bend. Completely surrounded by houses, Jim and Debbie Fields have developed a unique paradise, proving that small-scale sustainable farming is possible in this challenging climate.

Central Oregon is a region recognized for its shallow sandy soil, 12-inch annual rainfall, and short 90-day growing season. The challenge is magnified by wide temperature fluctuations of 90 degree days and evenings that cool to below 50 degrees. Some even remember having snow on the 4th of July. But none of this affects the enthusiasm at Fields Farm.

From Jim’s perspective, many of the extreme conditions can be modified. Soil can be enhanced through composting; temperatures can be improved through season extenders; and thanks to the irrigation rights on his property, he can use water effectively for frost control. In fact, Jim points out advantages of Central Oregon farming. “This climate is good for sweetening vegetables so our carrots are really good. They tend to taste better,” he says. Jim and Debbie purchased their Bend property in 1989 after deciding that the farm lifestyle was in sync with their family values. Debbie continued to work as a public health nurse while Jim learned all he could from Eliot Coleman’s book on farming in cool climates and by participating in the OSU Extension Master Gardener’s program. He pursued his goal of being an organic farmer and direct marketer, at a time when this type of farm business was rare.

To get a feel for direct marketing, Fields Farms started with eight Community Supported Agriculture (CSA) shares and slowly worked to increase farm capacity. By 2003, Jim and Debbie had expanded to 50 CSA shares, added a farmers’ market and were wholesaling produce to retail stores. In 2006, after growing to 68 CSA shares and the pressures of attending two farmers’ markets, Jim was forced to re-evaluate his priorities. “I had taken on too much and maxed out,” he says. “I decided to take 2007 off and planted a cover crop to let my land rest.”

The break served its purpose and by the following year, Jim was ready to hit the ground running. It didn’t take long to rebuild CSA shares in Fields Farm due to strong relationships that had formed through the years.

Jim also pursued his passion for composting. Early on in his farming career, Jim had developed a composting system with a goal of building soil through a process that would be economically viable. By receiving waste hops and spent grains from Deschutes Brewery, the composting plan turned out to be mutually beneficial for both parties. Jim then focused on a new desire to recycle waste food into soil food, and keep methane out of the landfill. Fields Farm now has a regular pickup route, collecting biodegradable wastes from restaurants in Bend’s Old Mill District.

This meshes well with Jim’s current goal for Fields Farm to have a zero carbon imprint. Since landfill methane is produced when organic materials are decomposed by bacteria under anaerobic conditions, Jim is helping his environment by bringing food wastes to his farm. He manages the wastes for a year and then uses the compost as a soil amendment and fertilizer for his farm. Jim also installed a solar array to help power irrigation and he utilizes bio-diesel in his tractors. Although this all contributes towards his goal of having a zero carbon footprint, Jim notes that the difficult part is being able to quantify it.

Jim is enthusiastic about learning new techniques and methods relating to farm production, operations and marketing. He shies away from the “pioneer” distinction and cites long-time farmers who were direct marketing crops to local supermarkets long before he arrived. But Fields Farm has paved the way for many aspiring Central Oregon farmers and Jim is happy to share his knowledge and help people learn from his experiences.

His first advice to new farmers is to start small and try things out before totally diving in. It is also helpful to have off-farm income to support the farm, especially when getting established. To further assist people, Jim teaches classes for OSU Master Gardener programs and OSU Extension Small Farms programs including Growing Farms: Successful Whole Farm Management and Living on a Few Acres.

Education doesn’t focus solely on adults. Fields Farm hosts farm tours for local schools, attracting 450 students last spring, who came to learn where food comes from. The farm also serves as a learning laboratory for Central Oregon Community College culinary students as they gain a better understanding of how organic, locally grown food is produced. Students said their time on the farm gave them a new appreciation for what it takes to grow and provide a steady source of food. “Some of these future chefs had never tasted raw carrots right out of the ground,” says Jim. “They were amazed by the flavor.”

In recognition for their contribution to agriculture, their community and the OSU Extension Service, Jim and Debbie were recently honored with an Oregon State University Extension Service 2010 Cooperator Award. 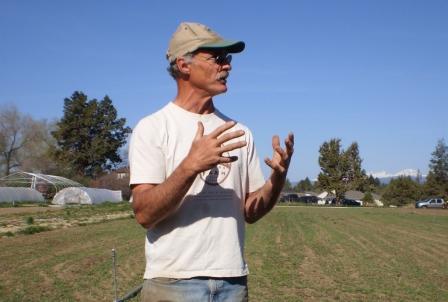 As small-scale sustainable farmers, Jim and Debbie have enjoyed the lifestyle, values and freedom that farming has provided for their family. With the growing enthusiasm and interest in local food, they feel it is more exciting than ever to be involved in agriculture. Local farmers are likely to benefit from the momentum of the local food movement as more people become interested in how their food is grown and where it comes from.

“This cultural shift is all good” he says. “People are willing to pay a little more for food that has more food value so our farmers can stay in business – and we will become a healthier society because of it.” With this, Jim shares a very important bit of information for aspiring young farmers. “You don’t do this to make money,” he says. “You do it for the love of growing things. Ours is a lifestyle choice.”