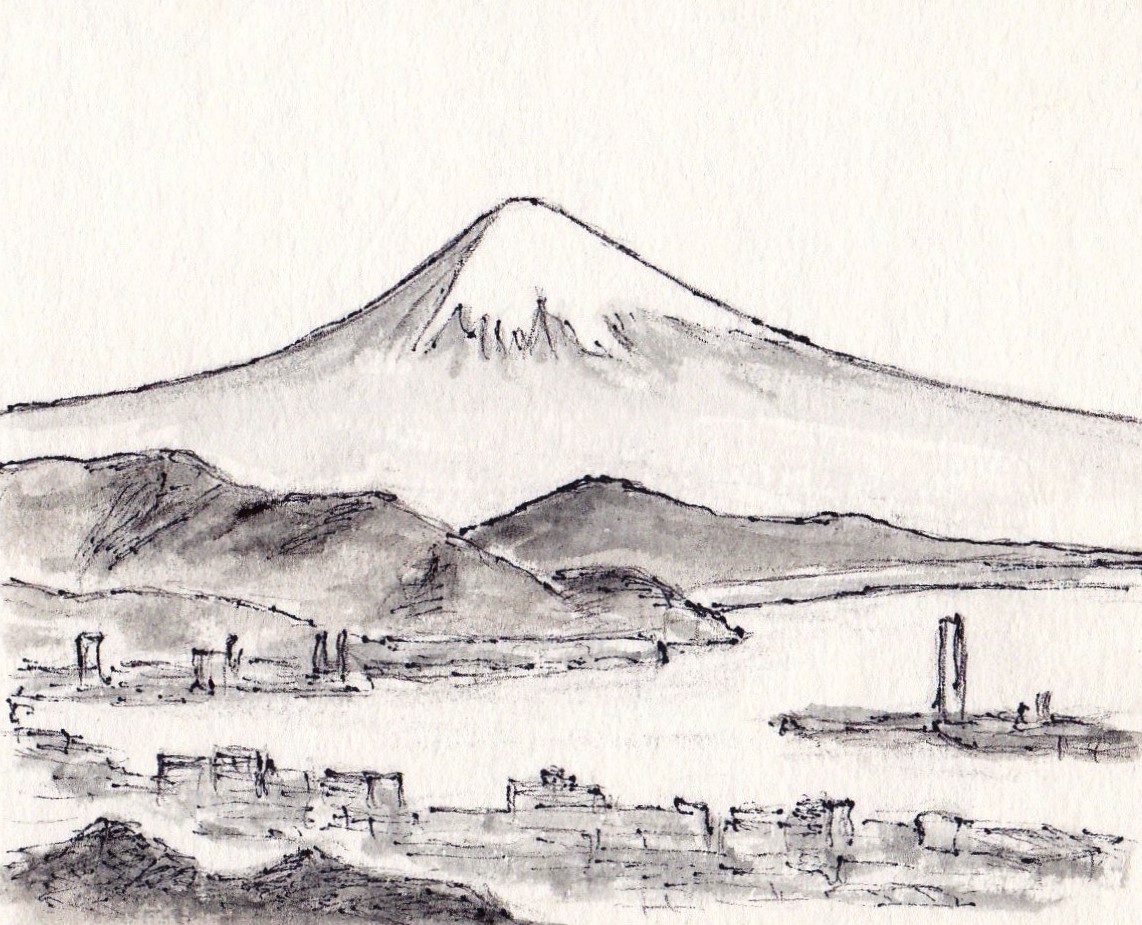 In the winter, Mt. Fuji is covered in white snow. It looks beautiful from a distance, especially from the Kuno mountain region in the Sizuoka Prefecture. Among the many other attractions of this area are the so-called stone wall strawberries.

The story of the stone wall strawberries began around the turn of the twentieth century. According to one version, a rickshaw driver at the Kuno Mountain Toshogu shrine, whose name was Kawashima, received a strawberry plant from the local Shinto priest. The priest had obtained it from a friend who was working at the American embassy. When Kawashima placed the pot at the base of a sunny stone wall, the strawberry plant was warmed by the radiating heat and bore beautiful fruit earlier than anywhere else. In 1901, Kawashima decided to start producing early bearing strawberries using stone walls. 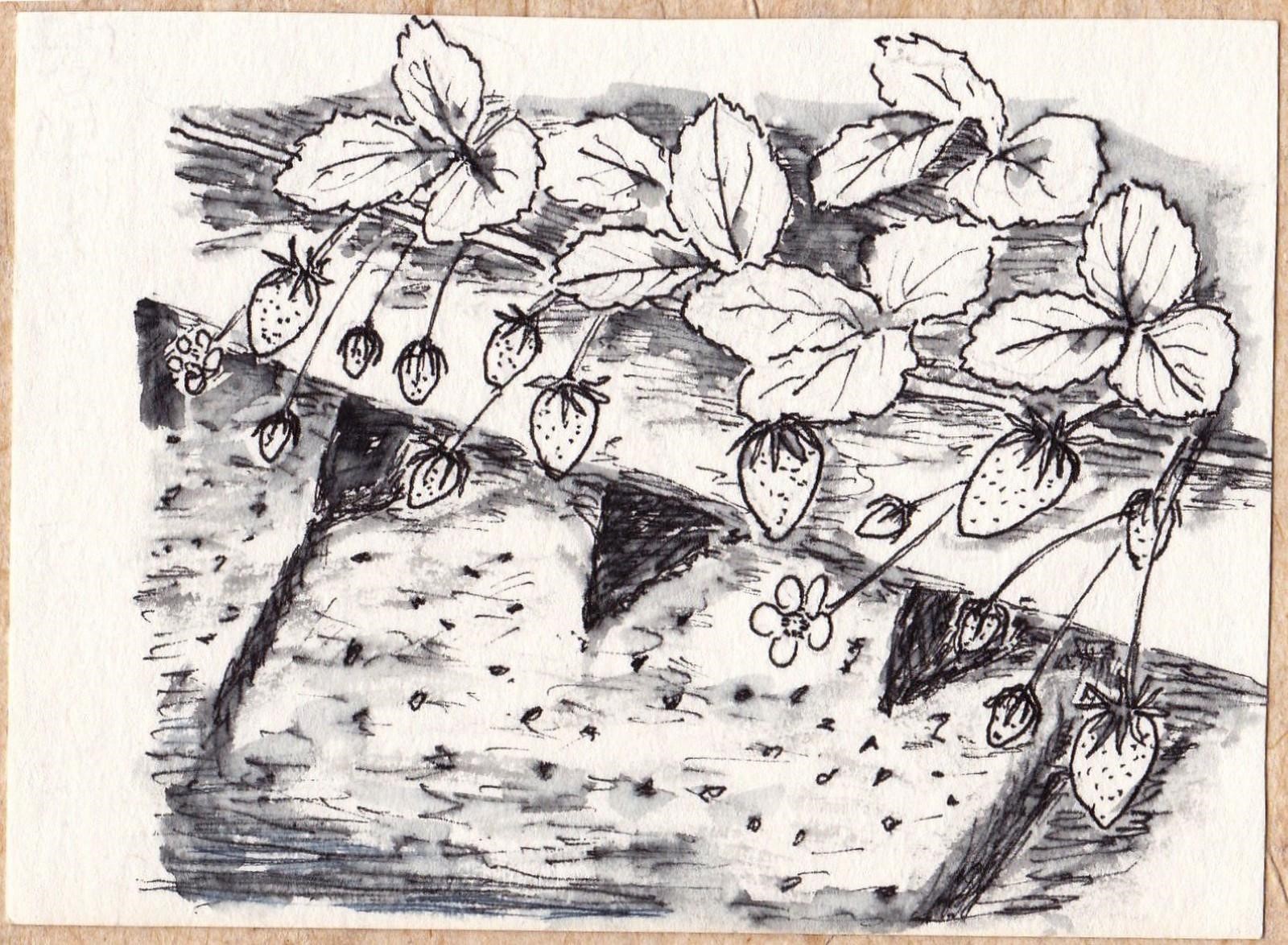 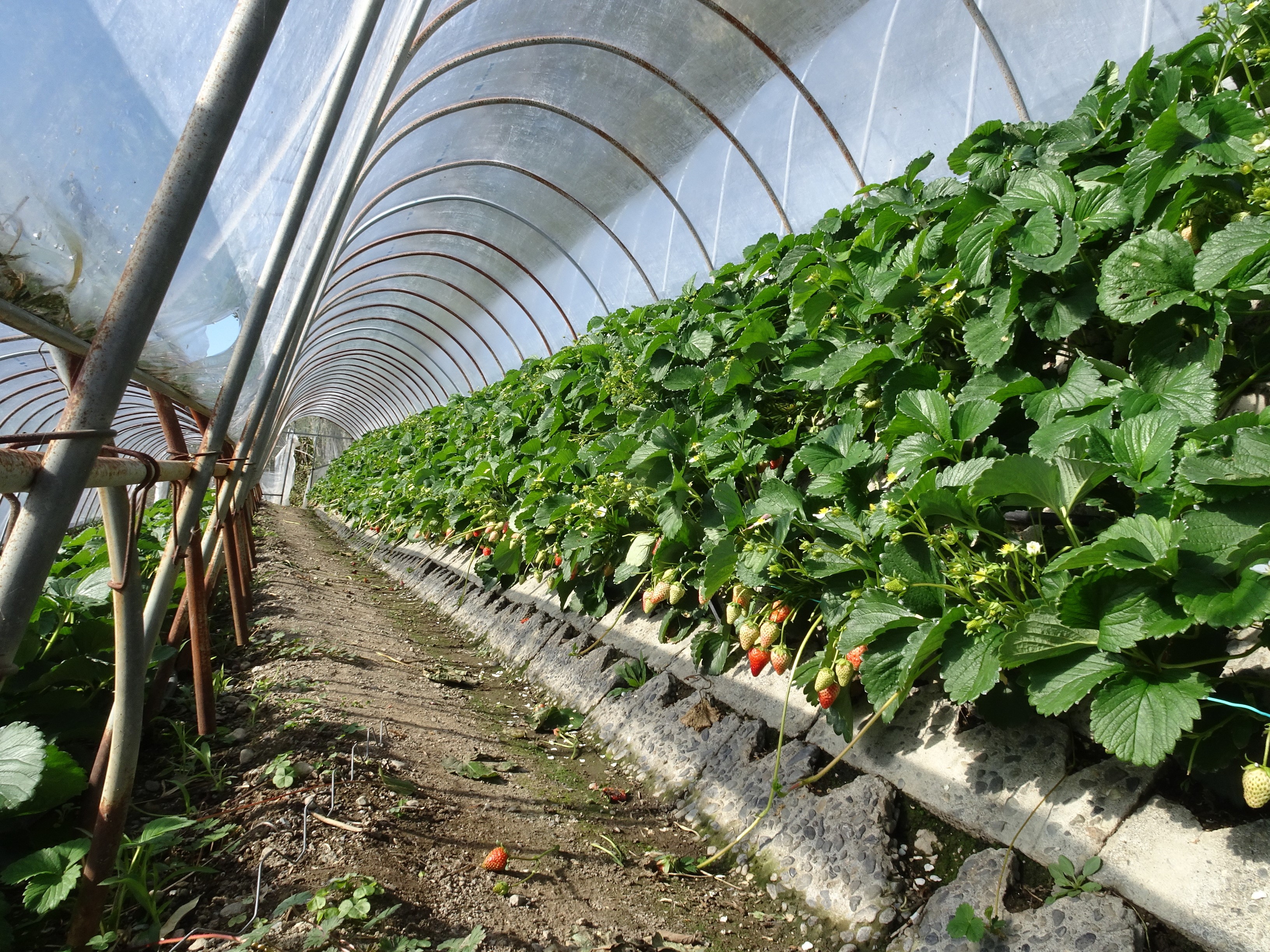 The Kuno region is backed by Nihondaira Hill and faces Suruga Bay. The slope is too steep for rice production. According to a second version of the story, a farmer named Hansuke Ishigaki thought “Well, if this is our fate, how about growing strawberries?” He began growing them in 1904 by piling up terraces made of stone pebbles collected from the bay shore. Coincidentally, his name, Ishigaki, means “stone wall”. By 1907, Ishigaki was shipping strawberries to the Tokyo market. A third version of the story credits a farmer named Seisaku Ogiwara with inventing the stone wall system in 1908, after he accidentally discovered that his strawberries, which were growing among stone pebbles, produced earlier than others. (Kakiuchi, 1960).

Local farmers experimented with planting strawberries at different angles and directions near stone walls to maximize the plants’ exposure to the sun. Steep angles were ideal for catching sunrays, but if the terraces were too steep, they eroded during heavy rains and had to be rebuilt. Retaining soil moisture and fertilizer was also difficult. The farmers eventually settled on a slope angle of between 40 and 60 degrees. Irrigation was another challenge. Until the water pump was introduced in the early 20th century, the farmers had to haul water with wooden buckets three or four times a day. To control the temperature, straw mats or oiled paper were sometimes draped over frames around the plantings, and they needed to be opened and closed.

By 1923, the pebble stone terraces were replaced with concrete plates with v-shaped crevices on the upper edges, into which the farmers planted strawberries. Devised by farmers Seisaku Hagiwara and Keitaro Araya, this system reduced the labor needs for stone wall construction. Strawberry acreage increased rapidly, and rose to between 80 to 100 hectares by the early 1930s. During that time, Kuno Stone Wall Strawberries became known throughout Japan.

The next leap forward in stone wall strawberry production took place in the 1930s, when the cultivar, ‘Fukuba’ was introduced to the region. It was bred in 1899 by Hayato Fukuba, who was a senior researcher at the Shinjuku Imperial Garden after his return from a study tour in France. Fukuba had initially tried to import strawberry plants; however, they dried up in shipping, so he was forced to import seeds instead. ‘Fukuba’ was bred from a chance seedling of the French variety ‘General Chanzy’. The new cultivar had large berries and ripened early. 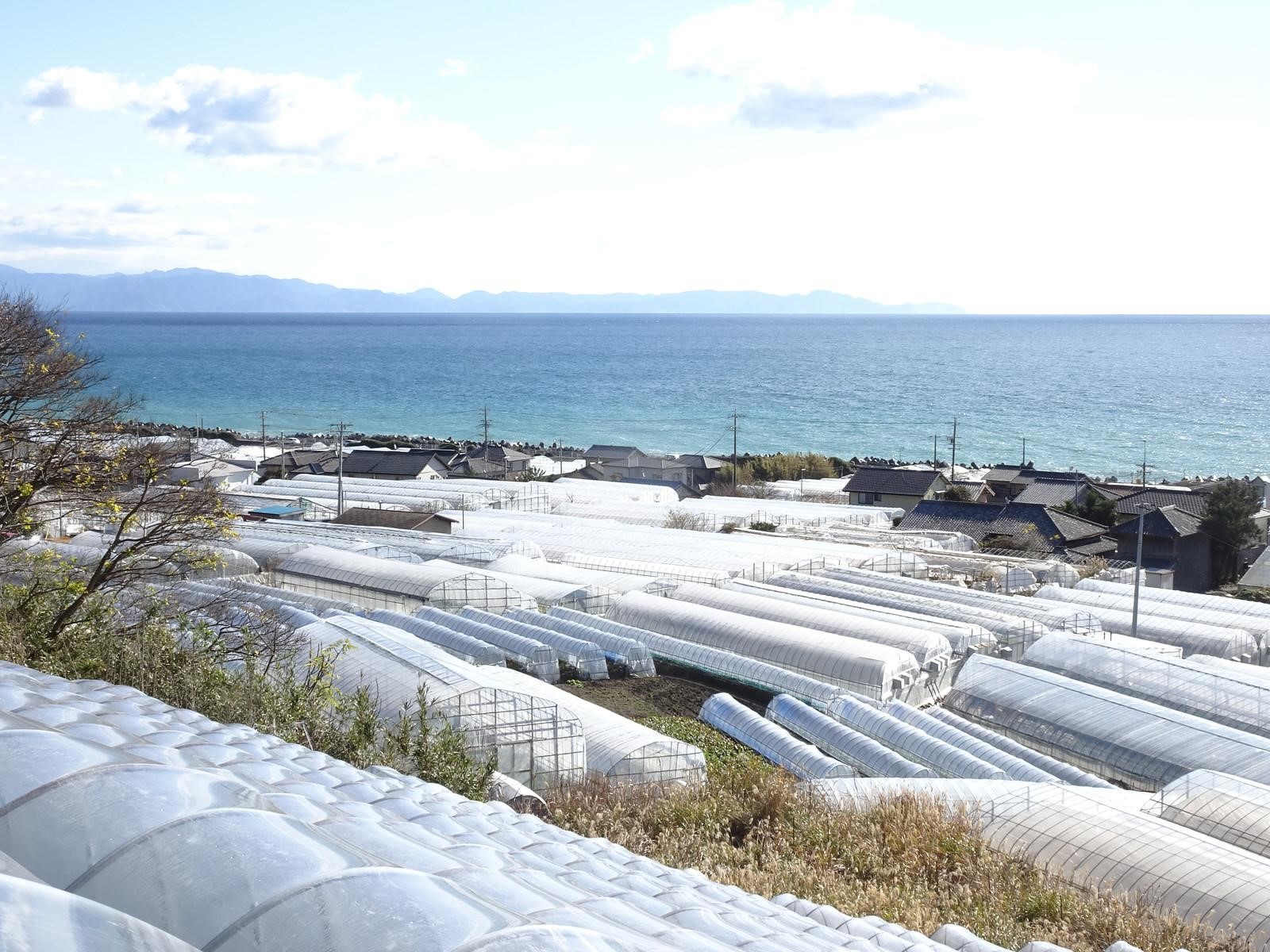 Strawberry production ceased during World War II, but it gained ground again by the early 1950s. At that time, a researcher named Keiji Ninomiya began experimenting with vernalizing strawberry stolons by exposing them to lower temperatures, after attending a lecture by Yasuo Eguchi of the National Horticulture Experiment Station in 1949. Ninomiya took strawberry stolons to the foot of Mt. Fuji for a month, and by 1953, he had figured out the right altitude and stolon size for optimal vernalization. Farmers adopted his method in 1955. As a result, they began harvesting strawberries one month earlier, in mid-October.

In the mid-1950s greenhouse production was introduced, and after 1966, u-pick production became more widespread. By this time, ordinary citizens could afford fresh fruit and vegetables, and the consumption of strawberries rose, especially in Christmas cake, a strawberry shortcake that became a symbol of post-war prosperity. At the peak of strawberry production in the mid-1970s, about 10 million plants were grown. 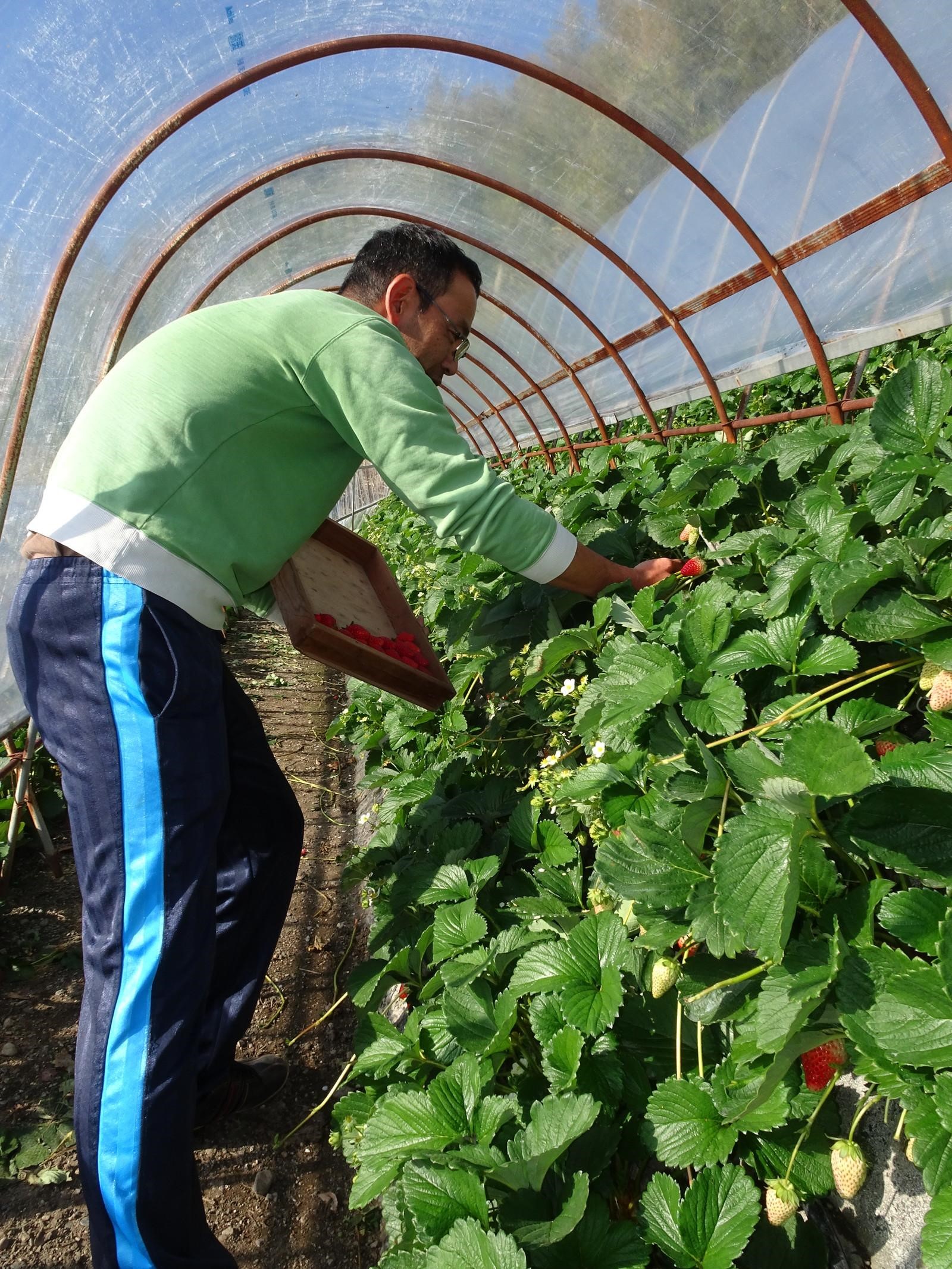 After World War II, farmers began breeding new cultivars. Masazo Hotta from the nearby city of Fujieda, introduced ‘Hotta Wonder’. It produced even earlier in October than ‘Fukuba’. ‘Hotta Wonder’ became the number one cultivar by the mid-1960s for Christmas cake. The first introduction by a Kuno farmer came in 1983. Akihiro Hagiwara bred ‘Kuno Wase’ (early Kuno), followed by ‘Akihime’ in 1989. Hagiwara disliked the other available cultivars, because he thought they were too sour for u-pick farming. When he sought advice at the local experiment station, he was told to create his own variety. ‘Akihime’ had good color and large size, with a sweet and not-too-tart flavor. It produced over an extended time and yielded well. By 2003 ‘Akihime’ was grown by 94% of the regional farmers.

Although most of the strawberry production in the Kuno region is now located in the lower plains, the author has deep respect for the determined farmers who transformed the steep, stony slopes. Nowadays, local specialty crops are promoted everywhere, but Kuno stone wall strawberries were at the forefront of this movement. In a plum orchard at the Kuno Mountain Toshogu Shrine, a monument commemorates the “Birthplace of the Stone Wall Strawberries”. Currently, the strawberry acreage of the region is 50 hectares, farmed by about 240 families. Today, visitors to u-pick farms pay a fee for half an hour of picking and receive a container of sweetened condensed milk to enjoy with as many strawberries as they can eat!