A New, BIPOC-led Farmers Market Takes Root in Portland: The Come Thru market is also an incubator for farmers and artisans who are just getting started 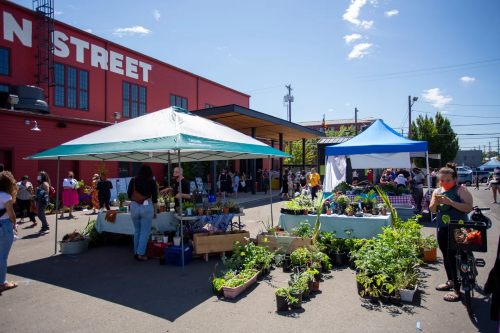 This article was first published in Portland Monthly, July 17, 2020, and republished here with their permission. Link to the original article: https://www.pdxmonthly.com/eat-anddrink/2020/07/a-new-bipoc-led-farmers-...

For updated info on Come Thru’s schedule and vendors, visit them on Facebook: https://www. facebook.com/comethrupdx/. The next market is Monday, November 9, 11am-3pm.

Fifteen minutes before the first day of the Come Thru farmers market, a new, every-other-Monday market aimed at showcasing BIPOC farmers, organizer Allinee “Shiny” Flanary was trying not to panic.

There was already a line around the block at the Redd, an event space and community kitchen in SE Portland. Eager volunteers had been on hand since early that morning to help set up. All good signs, except that the only one of the expected 10 farms to arrive set up their booth was the Raceme Farm Collective, to which Flanary herself belongs. (The collective includes three independent Black and Brown-run farms that share infrastructure, marketing and planning duties; at her Scrapberry Farms she grows herbs to make salves and tonics.) 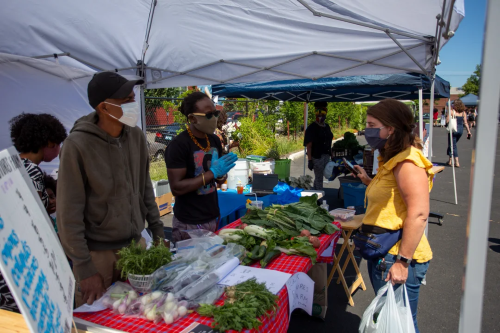 “People thought this market would be the tiny community project that doesn’t have a lot of foot traffic,” Flanary says. “What actually happened was for three straight hours, we had a line around the entire block.”

But within an hour, four more farmers had shown up and set up, and the market was fully underway.

Three times each, those first vendors ran out of food, Flanary recalls, and three times each they replenished, sending runners to their plots to harvest more produce. Each time during that first market, she says, everyone at the market and in line—only 25 people are allowed in at a time to encourage social distancing—gave them a round of applause. A DJ arrived to play some music, and dancing broke out among those waiting in line. By the end of the fourhour market, the volunteers Flanary had stationed at the entryway had counted over 1,100 people coming through.

“We had the most Black folks at a farmers market that you have ever had at Portland,” Flanary says. “We wanted a BIPOC-led and centered market that also centered BIPOC consumers to expose folks to new kinds of food.”

And that’s what she’s building in the Come Thru’s second incarnation. The first was in 2019 at the Oregon Food Bank, which is off Columbia Boulevard in a stretch of NE Portland without any appreciable foot traffic and limited public transit. It was a noble experiment, Flanary says, but at the end of the season, it felt like a one-off. 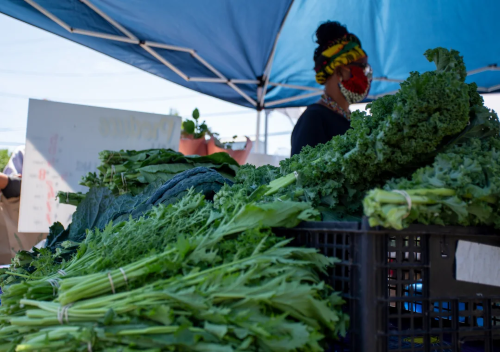 Then, amidst the Black Lives Matter protests that have gripped Portland and other cities nationwide for the better, Flanary, who describes herself as a “a Black, queer, anti-racist dirty femme” as well as an “an alchemist, cottage witch, farmer, medicine maker, and decolonizer,” got a call from the Black Food Sovereignty Coalition, a nonprofit that was formed to support Black-led farming and food justice in the Portland area. (She knew them in part from her participation in the Pathways to Farming project—a three-year incubator program supported by local Black-owned farm Mudbone Grown in conjunction with the Oregon Food Bank.) There was grant money available to revive the Come Thru, a stipend for her to act as market manager, and a space available at the Redd—the only catch was that it had to be up and running in just two weeks to make the most of the summer growing season.

Flanary swung into action, aware that she was challenging the city’s dominant notion of what a farmers market could be: a space for affluent white consumers who’ve been trained to expect the market to be as wide-ranging as the local grocery store.

The Come Thru is different, she says. It’s an incubator for new farmers who are still figuring out how much to charge per beet, the vagaries of market insurance and government regulation, and a place where vendors will also sell medicine, herbs, prepared foods, and handmade crafts—“like a cigar box guitar, which is, you know, really lovely, but not an eggplant,” Flanary says.

Right now, the Come Thru is scheduled to go through September, with a possible extension into November if organizers can work out a deal with the Redd to move operations inside—so long as market metrics support that, which depends on keeping up the foot traffic this summer. Word about the success of the first market day spread fast, and now Flanary has 20 vendors signed up, including tribal fishermen, holistic skin care and wellness vendors and two Creoleinflected prepared food stalls.

It’s all a delicate balance. To make the market a lasting financial success, Flanary says, she needs white Portland to turn up—and yet, the market vendors want flexibility for initiatives like setting aside produce for BIPOC families in need.

“We need white Portlanders to do the work with their dollars,” she says. “I do want to say that to people. Please come out. Please join in this marketplace with us, but also learn to move in spaces that don’t center you.”