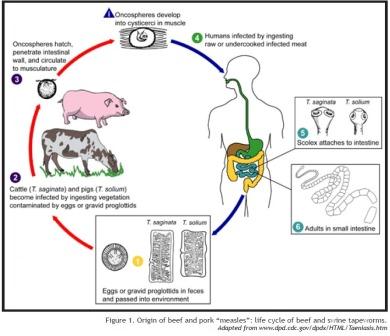 Many parasites have evolved with their hosts until a type of “if-you-don’t-bother-me-I-won’t-bother-you” relationship exists. It is not to a parasite’s advantage to kill its host! However, sometimes parasites get into the wrong host and various problems can arise. The case of “measles” in beef, pork, sheep, and goat meat is one such example.

Measles is the term given to the carcass damage that occurs when immature tapeworms encyst in pork, beef, sheep, and goat meat. A few to thousands of small white nodules can be found at processing, which necessitates carcass trimming or condemnation to keep the food supply safe.

NOTE: The use of the term “measles” to describe this situation is unfortunate because it naturally makes one think about human measles. There is no connection between these two terms; the meat measles discussed in this article is caused by parasites; the human disease is caused by a virus. The true name of meat measles is cysticercosis (sis-tuh-sur-KO-sis).

Animals on pasture can sometimes ingest contaminants with forage. If they ingest tapeworm eggs or segments from other species such as dogs or even humans, cysticercosis can affect their carcass. In beef cattle, the human tapeworm Taenia saginata is the culprit. Cattle’s feed or forage can become contaminated with this parasite if untreated human waste makes its way onto cattle pastures or into feed, if improperly treated human wastewater is applied to cattle pastures for irrigation or fertilization, or if cattle drink water contaminated with this human parasite.

If cattle ingest infective T. saginata tapeworm eggs or segments, the eggs hatch in the animal’s intestinal tract, and an immature form of the tapeworm encysts in muscle tissue. These cysts are pea-sized and readily visible. They are white and maybe fluid-filled or calcified, depending on the animal’s reaction to the parasite. The life cycle of this parasite would be completed if a human ingested these cysts in undercooked meat; the parasite would mature, lodge in the person’s small intestine, and perhaps go on to live a very long and undetected life in the human, discharging eggs or infective segments with the host’s feces.

A very similar situation can occur with swine and the tapeworm Taenia solium. Again, humans are the definitive host, which means they are the species in which the parasite completes its life cycle, reaches adulthood, and is able to produce eggs. Should swine ingest human tapeworm eggs or segments, tapeworm cysts can develop in pork muscle and be detected at slaughter. Refer to Figure 1 below from the Centers for Disease Control’s Division of Parasitic Diseases and Malaria for a graphic depiction of the life cycles of T. saginata and T. solium.

FYI, T. solium can create serious diseases in humans. If humans ingest T. solium eggs and/or if the adult tapeworm is refluxed from the small intestine into the stomach, human cysticercosis (painful cysts in muscles) or neurocysticercosis (cysts in the brain) can develop. If humans ingest T. solium cysts in undercooked pork, they can simply develop the less problematic (but still disgusting) adult tapeworm, which can live happily undetected in humans for decades.

The case is much different for tapeworms involving sheep and goats. Taenia hydatigena, T. ovis, T. multiceps and Echinococcus granulosis are all tapeworms that involve sheep and/or goats as intermediate hosts. The definitive hosts are canines— dogs, foxes, coyotes, and wolves. A grazing sheep or goat could ingest tapeworm eggs shed in an infected canine’s feces. Depending on the species of tapeworm, immature forms can lodge in the affected sheep or goat’s lungs, liver, brain, abdominal cavity or muscles. The muscles usually affected include the tongue, jaw muscles, heart, and diaphragm.

Unlike the tapeworm life cycles involving beef and pork described above, humans are not involved with most of the canine tapeworms that affect sheep and goats. The exception is E. granulosis, which can cause hydatid disease in humans who ingest eggs through contact with infected dog feces. In this case, immature tapeworms can encyst in human organs such as the lungs, liver, brain, etc., and cause various health problems. 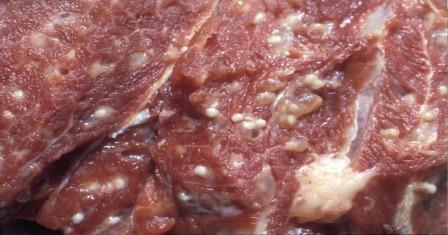 Blood tests for relevant antibodies can detect cysticercosis in animals before slaughter, but the cost is considered prohibitive. Cysticercosis is generally identified during slaughter when cysts can be seen in muscle or organs. Affected tissues are trimmed out and removed from human consumption; carcasses with many lesions are condemned. If even just one cyst is detected, the processor must freeze the carcass for 15 days to make the remaining carcass safe for human use. Cysticercosis, therefore, causes economic hardship to producers, processors and consumers.

Although humans are the definitive host for T. saginata and T. solium and these tapeworms often cause no illness in their human hosts, the public deserves to trust in the safety and wholesomeness of the food they buy. Trained USDA inspectors can identify cysticercosis at slaughter and intervene to keep affected products out of the food supply; experienced custom processors can recognize this condition as well. If a significant number of animals from a certain source is affected with cysticercosis, federal veterinary inspectors will visit the premise of origin to determine and eliminate the means of infection.

Cysticercosis is a quality assurance issue that can affect pork, beef, lamb, and goat meat produced on any scale. Small acreage owners and large commercial operators alike should devote time to reducing the likelihood that the meat they produce is affected by encysted tapeworm larvae. Enacting the prevention and control measures listed above should greatly reduce the risk of cysticercosis in a herd and thereby eliminate the need for carcass trimming or condemnation.

Thanks to Dr. William J. Foreyt, Washington State University College of Veterinary Medicine Department of Veterinary Microbiology and Pathology, for reviewing this article.