“I built a packing plant to support my farming habit.”

Mike and Patty Kloft are the farmers behind Lonely Lane Farm, a meat company based in Mt. Angel, OR, that sells pork and 100% grass-fed beef, both raised with no hormones or antibiotics. They recently took over a critical link in their supply chain: processing. Century Oak Packing, in Mt. Angel, OR, is a USDA-inspected “cut and wrap” facility where they turn whole carcasses into packages of meat for sale. The plant was designed for co-packing, and the Klofts are currently seeking other local meat producers interested in USDA inspected retail cutting and packaging, and value-added production. 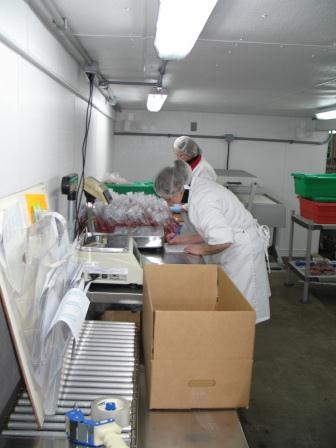 Mike and Patty both have deep roots in Mt. Angel. Mike is a third generation cattle farmer, and Patty is a fifth generation pig farmer. Mike’s grandfather had a meat packing plant but sold it when he started Lonely Lane Farms in 1939. The farm was originally a dairy and then switched to beef in the 1980s after the dairy market collapsed.

Long before grass-fed beef was popular, Lonely Lane cattle were forage-finished. The Klofts grew their own alfalfa for finishing, and the cattle, 100% Polled Herefords, graded low Choice, with white fat. “The breed makes a big difference in how things marble,” Mike explains. They never used antibiotics or hormone implants. It wasn’t a marketing strategy, just how they did things. “We didn’t know anyone wanted that,” Mike laughs.

In 1999, while a student at OSU, Mike was selling finished beef cattle to a nearby processor but cattle prices were then very low. He started thinking about other options. He was taking a class in world agriculture and food from OSU Professor Garry Stephenson and after class one day asked for advice about direct marketing. Mike remembers Garry’s advice to the word: don’t find a product to match the market, find a market to match your product.

Mike began selling packaged cuts of meat at retail stores in Corvallis and the Beaverton farmers’ market. While other local meat producers often only had fresh product seasonally, Lonely Lane could deliver fresh meat year-round, because the farm staggered calving to be year-round.

Initially, they direct marketed no more than 50 head of beef each year. They now sell 165-200 head of beef and 250 hogs per year. The hogs are all raised on Patty’s family farm, and they have added four co-producers for beef. Their #1 market is grocery stores, and #2 is the Beaverton farmers’ market, where Lonely Lane was the first beef and pork vendor, drawing customers from miles around because no other farmers’ markets had meat then. 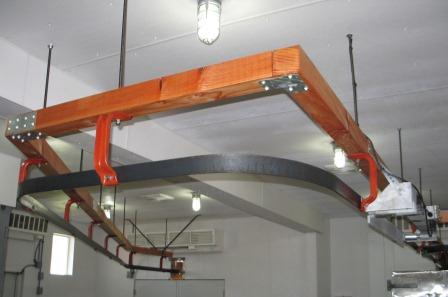 From farmer to butcher

When he began marketing meat, Mike was lucky to have a USDA inspected meat processor, Mt. Angel Meats, in the same town. When he started bringing animals there, the plant was in need of a HACCP plan, which Mike offered to write. In return, he asked for packaging space in the plant. He then started helping with cutting. At the peak, he processed four head a week there.

About three years ago, Mike decided he needed more control over his processing – specifically the cutting and wrapping part. In NW Oregon, USDA inspected slaughter is fairly available; what he found he needed was his own cutting plant. “I realized I had to build a facility or get out of the market.”

After unsuccessfully trying to buy an existing plant, he decided to build his own. His father and uncle helped him remodel an old dairy barn on the farm property; it took 18 months and cost about $500,000. The plant is 4500 square feet, with cooler capacity to hold 25,000 lbs or 30 beef (or equivalent).

The plant received its grant of federal inspection earlier this year. They are currently processing two to four beef and three to five hogs each week. Livestock are slaughtered at Mt. Angel Meats or Dayton Natural Meats, then transported as quarters to Century Oak for aging, cutting, and packaging. They also make fresh sausage and plan to have their smokehouse operational by summer.

Mike estimates that the current Lonely Lane sales accounts will use one full day each week, Wednesday. He is looking for regular, weekly processing customers for Tuesday and Thursday. “Now and then” customers will come Mondays and Fridays.

Because the Klofts bootstrapped the plant themselves and took on no debt, Century Oak will break even with only their own product, since both Mike and Patty can handle all their own cutting and packaging. When they have additional processing customers, they will hire an experienced butcher who is a friend of the family and ready to sign on when needed.

“If things go well,” Mike speculates, “if we operate at capacity, we’ll build a new plant in 10 years, a larger one.”