The market for local foods continues to expand in the United States. Farm operations with direct-to-consumer (DTC) sales of food increased from 116,733 to 144,530 between 2002 and 2012. Consumers have more opportunities to purchase food directly from producers, with 8,268 farmers’ markets operating in 2014, up 180 percent since 2006. DTC marketing—where producers engage with consumers face-to-face at roadside stands, farmers’ markets, pick-your-own farms, onfarm stores, and community-supported agricultural arrangements (CSAs)—is a substantially different business model from traditional marketing and is one that could help some farmers survive and prosper in a risky and competitive business environment. This article compares the farm business survival and growth rates of farms with DTC sales to those who market through traditional channels, such as grain distributors, processors, and wholesalers. Data show that farmers with DTC sales are more likely to remain in business than other farms but increase in size (measured by sales) more slowly. These differences in survival and growth rates could be explained by attributes of DTC marketing that result in different debt-to-asset ratios, farm income risk, and labor requirements, or possibly by differences in off-farm employment opportunities or preferences for farm versus nonfarm work.

Farms operate in a challenging business environment, with profits that can vary substantially from year to year as product prices, input prices, and yields vary. According to Census of Agriculture data, only 55.7 percent of all U.S. farms having positive sales in 2007 also reported having positive sales and the same farm operator in 2012. However, farmers who market food directly to consumers have a greater chance of remaining in business than those who market through traditional channels. Based on a comparison of farms across four categories (defined by annual sales), farmers with DTC sales had a higher survival rate (the share of farmers who reported positive sales in 2007 and 2012) in each category. The differences in survival rates were substantial—ranging from 10 percentage points for the smallest farms to about 6 percentage points for the largest.

What is it about DTC marketing that seems to enhance farmers’ chances of remaining in business? One advantage for DTC farms may stem from having lower rates of machinery purchases and land ownership than farms using traditional marketing. According to data from the 2012 Census of Agriculture, farmers who marketed directly to consumers owned $20.82 worth of machinery per dollar of sales, compared with $31.10 for those who marketed through traditional channels. And farmers selling directly to consumers owned $240 worth of land per dollar of sales, compared with $309 per dollar of sales for other farmers. Because they did not need to purchase as much machinery and land to achieve a certain level of sales, farmers with direct sales did not need to leverage as much of their wealth to obtain financing. Furthermore, Census data reveal that farmers with direct sales had annual interest payments of only $7.85 per thousand dollars of owned assets, compared with $10.55 for farmers with no direct sales. A lower debt-to-asset ratio should indicate a better ability to repay loans and has been associated with a lower risk of small business failure.

Farm income risk also helps account for some of the differences in survival rates across farm types. For farmers who do not sell directly to consumers, profits can fluctuate widely because of changes in input and output prices and yields. Farmers who market to consumers are also exposed to these risks; however, these farmers derive some of their income from their marketing activities and not just production. Income from marketing depends on the margin between the wholesale and retail price and the time spent marketing. Even when input and output prices vary, the markup between the wholesale and retail prices should remain relatively stable. Hence, the additional income that can be earned from selling directly to consumers versus selling to wholesalers should not vary substantially because of price fluctuations. Therefore, it is plausible that total farm income is less risky for DTC farmers. 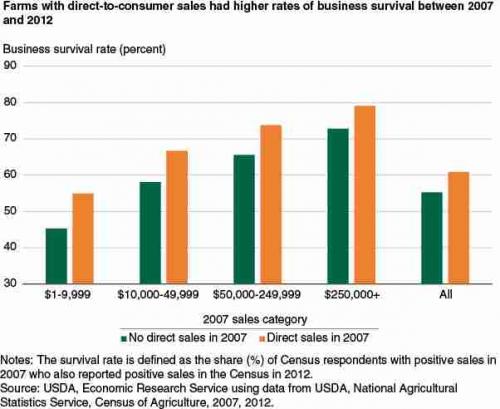 While farmers who directly market to consumers are more likely to continue farming than those who do not, their businesses expand at a slower rate. Among surviving farms in all sales categories, sales by farms using DTC marketing grew slower (had a smaller percent change in nominal total gross sales between 2007 and 2012) than those by farms with no direct sales. On average, surviving farmers with direct sales in 2007 increased their total sales by 13.5 percent between 2007 and 2012, compared with 19.3 percent for surviving farmers with no direct sales.

The difference in growth rates of sales may stem from differences in labor requirements. Selling directly to consumers through farm stands, farmers’ markets, or CSAs is labor intensive. The 2012 Census data indicate that in every sales category, farmers with direct sales hire significantly more labor than farmers with no direct sales. Because farms that market through traditional channels require less labor, these farms can become larger before labor must be hired. In contrast, farms using direct marketing would need to begin hiring labor at a smaller scale of production. Transaction costs associated with hiring labor could provide a greater obstacle to expansion for farms with DTC sales. 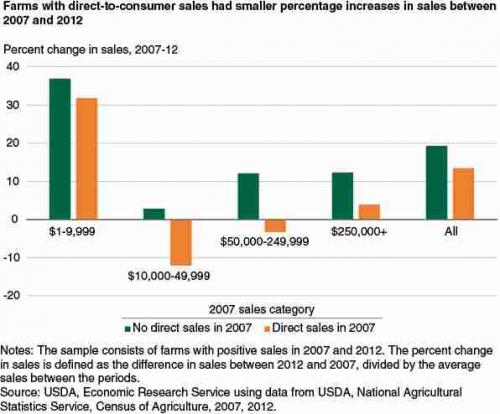 The higher survival rates and slower growth rates for farms with DTC sales may be attributed to differences in off-farm opportunity costs. Studies have found evidence that small business survival depends not only on economic performance but also on the entrepreneur’s human capital and alternative employment opportunities. Farmers with limited off farm income opportunities would be more inclined to remain in farming, despite lower farm profits and less ability to expand the business. The Census data do not include a measure of time spent working on the farm, so one cannot evaluate the returns to labor from farming.

Higher survival rates and slower growth for farms with direct-to-consumer sales may also stem from different attitudes toward farm versus nonfarm work. Researchers have found evidence that nonfinancial benefits from self-employment may encourage small business owners to remain in business despite earning less income. There is also evidence that the nonfinancial benefits of farming (e.g., greater autonomy, independence, and lifestyle factors) are substantial. It is possible that farmers who sell directly to consumers derive greater nonfinancial benefits from their work— perhaps they enjoy interacting with their customers. This would provide a greater incentive for them to remain in business even with lower business expansion possibilities.

This article is drawn from: