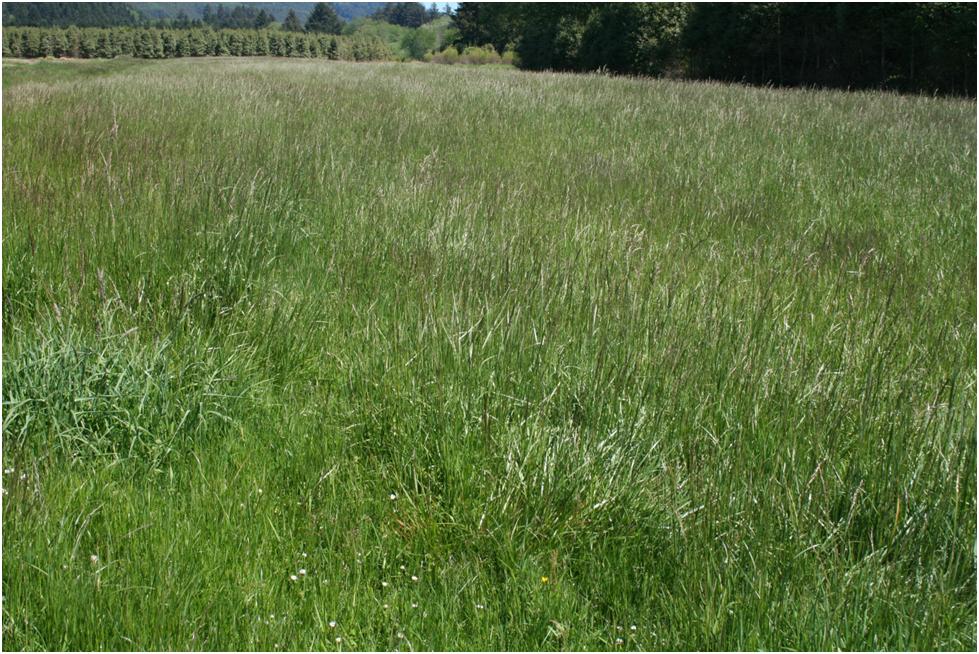 Nearly everybody involved in agriculture knows something about soil pH. Broadly, pH is a measure of the hydrogen ion concentration in soil solution which controls the overall suitability for root growth of any plant. Different plants have differing abilities to get plant nutrients from this soil medium, hence the reason why we need different soil pHs for specific crops. Most cool season forages grow better in a pH range of 5.5-7.5. However, outside this pH range, we expect soil conditions to become a limiting factor in production. Soils tend to become acidic due to leaching from the high rainfall that we receive especially along the coast, which removes nutrients like calcium, potassium, and magnesium leaving a high concentration of hydrogen ions in soil solution. Most of the nitrogen-supplying fertilizers we use such as ammonium sulfate and urea also help acidify the soil further. Lime is generally used to raise the pH to desirable levels depending on soil test recommendations. The big question now is should we surface apply lime to pastures to change pH or should we till, apply lime, and start new pastures?

For lime to change soil pH, mixing with soil is necessary. Calcium carbonate, the primary component of lime, is not soluble. The inability to move with water inhibits lime from changing soil pH unless it is mixed with soil. In the absence of tillage, lime will be contained to the top inch of the soil. External forces are needed to assist the movement of calcium carbonate deeper into the soil. Some studies in the 1960s and 1990s from Western Oregon have illustrated the lack of soil pH change when lime is top dressed or surface applied to seven perennial ryegrass seed fields. Fifteen months after lime was applied, the soil was carefully sampled to four inches. Lime increased soil pH only to a depth of a one-half inch, and even after six years, there was little change.

However in a filbert orchard, surface applied lime was found to raise pH 5-10 inches below the soil surface. Also in a current ongoing study in a Douglas-fir forest ecosystem, pH change and exchangeable calcium levels were found to be significantly higher than control plots down to 32 inches. This movement has been attributed to soil microorganisms, especially earthworms and the forest soils, maybe preferential flow patterns following living and dead root systems. However, many questions still remain for the pasture system in relation to the effectiveness of surface-applied lime.

The following summary and argument is from research conducted by Troy Downing and John Hart, OSU Extension professors, on liming coastal soils.

A project was conducted on two sites that had initial soil pH values of 5.1 and 5.3. Twenty-four plots in two sites were planted to perennial ryegrass and limed at 0, 1 ton, 2 ton, and 4 tons per acre equivalent. Half the treatments were applied and incorporated while tilling before planting and the other half of the plots received lime as a top dress application during the first winter. Plots were harvested six times a year for two years. Yield and quality data were recorded and the data was statistically analyzed. Lime treatments increased soil pH significantly as well as slight increases in yield. Differences in yield from the control plots to the highest lime application plots were significant. However, the total increase was only around 1000 pounds of forage (less than a 10% increase) per acre per year. If we value this increase in forage as feed at 8 cents a pound, we increased the value of forage by $80 an acre. The four-ton treatment of lime could cost $240 - $280 acre (even triple that in 2008-09 depending on location), making the economic return questionable. One main question that is not answered yet, is how long this increase will last. Typically, we would estimate liming working for 5-7 years.

These results were surprising to the researchers. We have always thought that when pH is the limiting factor, then ‘fixing’ it will solve the yield equation. Soils in western Oregon do have high organic matter, and this could be buffering the pH change to an extent not similar to Willamette valley soils and conditions. These soils started at 5.2 and were increased to 6 at the highest treatment.

As we, at OSU continue to formulate research to address this liming dilemma, what we currently know is that top-dressed lime does not change soil pH by more than the surface inch or so unless it is mixed with the soil in pastures. Top dressed lime can alter plant growth, but more than a year may be required before a change in plant growth is measured. In contrast, changes in soil chemical properties and plant growth can be measured in a few weeks after lime is incorporated.

Therefore for these pasture systems, it will largely depend on your management objective. If you really want to influence the nutrient status of the soil, lime has to be mixed before you put it in a new pasture. If you want to maintain a level pH to provide adequate calcium, surface application of lime may be an option but not necessarily an economical way to do it in the long run.