The Invention of the Rice Transplanter by Farmers 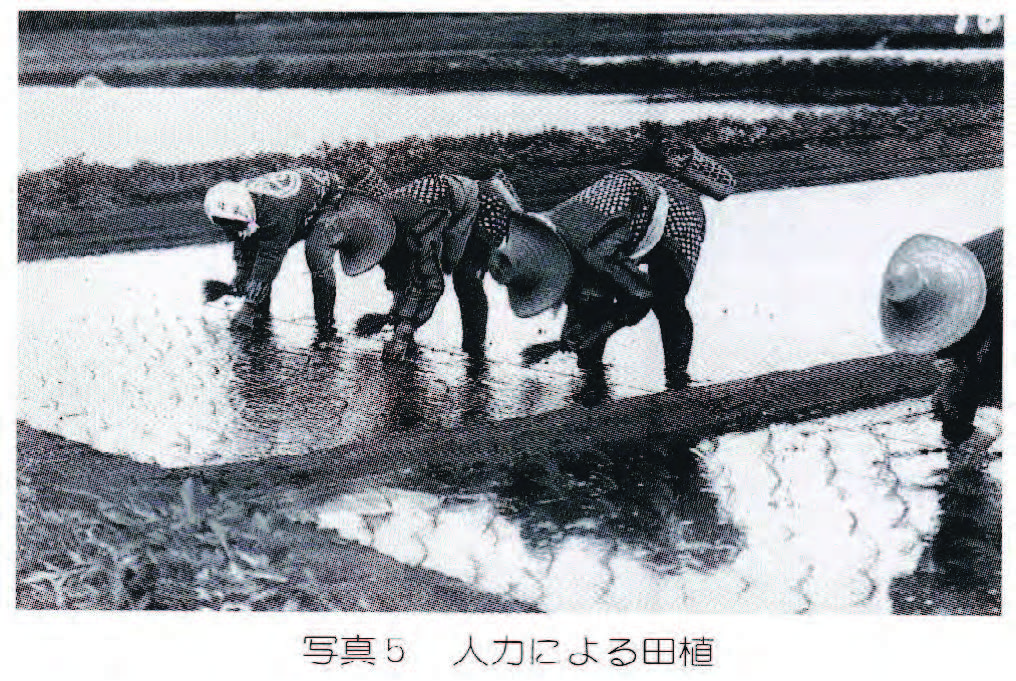 Until the 1970s, rice planting in Japan was backbreaking manual labor, done by workers bent over in muddy rice paddies. Rice was grown on many small intensive farms, and it had to be transplanted rather than direct sown to maximize yield and quality (Figure 1). The workers, many of whom were women, developed crooked fingers and hunched backs from spending days planting rice seedlings and weeding by hand. The invention of the rice transplanter relieved them from much of this agonizing work. Today, 98% of Japanese rice fields are planted with mechanized transplanters.

Although some might assume that large manufacturers or public research institutes developed rice transplanters, much of the innovation and troubleshooting was done by farmers and independent inventors. Their own experience of the hard labor of rice planting inspired them. Because they did not receive any outside funding, many of these inventors had to abandon their projects when they ran out of money. One farmer named Arakawa described how difficult it was: “Our savings were being depleted, and we couldn’t even afford clothes for our young children. I regretted creating such hardship for them, and it broke my heart to see their faces at night while they slept.” 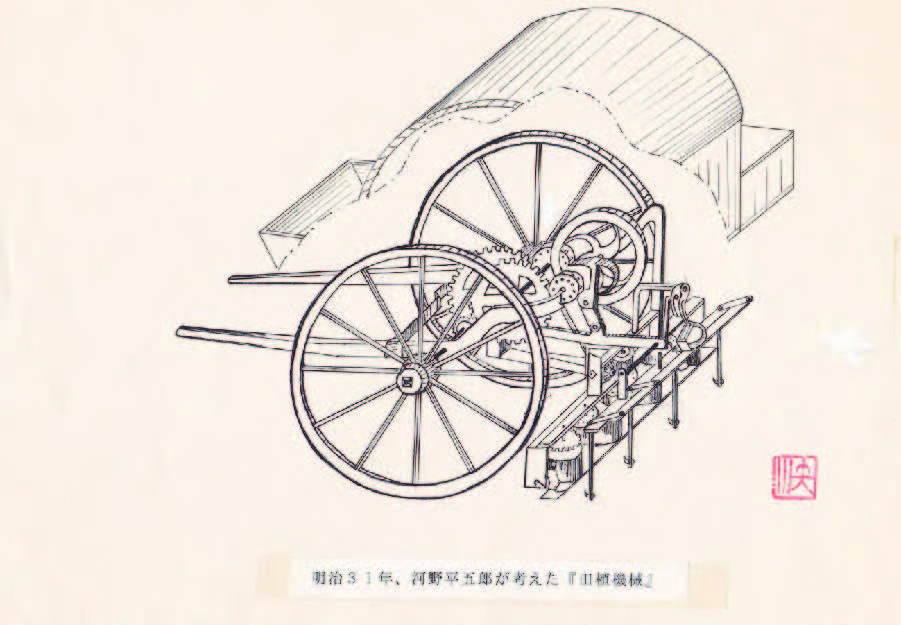 In 1898 the first rice transplanter patent was granted to a farmer, Heigoro Kono, who was originally from a samurai family in the village of Kitago, Miyazaki. At that time, many other new machines such as motorized rice millers and green tea rollers were being developed and introduced. Figure 2 shows Kono’s fourrow rice transplanter, which was pulled like a rickshaw and had gears to move the planting hooks. 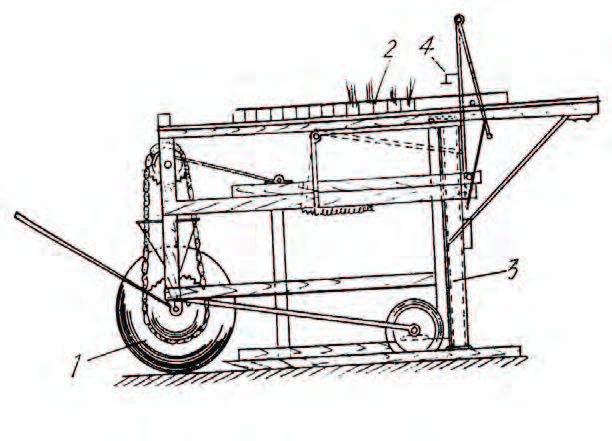 Between 1898 and 1955, 192 new patents were filed for rice transplanters, the majority of which were submitted by farmers and farm machine merchants. They ranged from simple to sophisticated; including models that resembled mechanized puppets, portable planters with wheels, planters with sled tracks, planters pulled by cables, planters driven by humans or domestic animals, and self-propelled machines. Most of them imitated the hand movements of transplanting bare root rice seedlings.

Other models were similar to modern transplanters, which utilized trays of seedlings with soil attached to the roots. Benzo Watanabe of Okayama City invented the first example in 1933. Figure 3 shows his simple machine, which looks like a wooden desk on wheels. A band of precut seedlings in soil was placed on the top of the platform. Each plant was cut off by the movement of the machine and dropped through a cylinder into the ground. 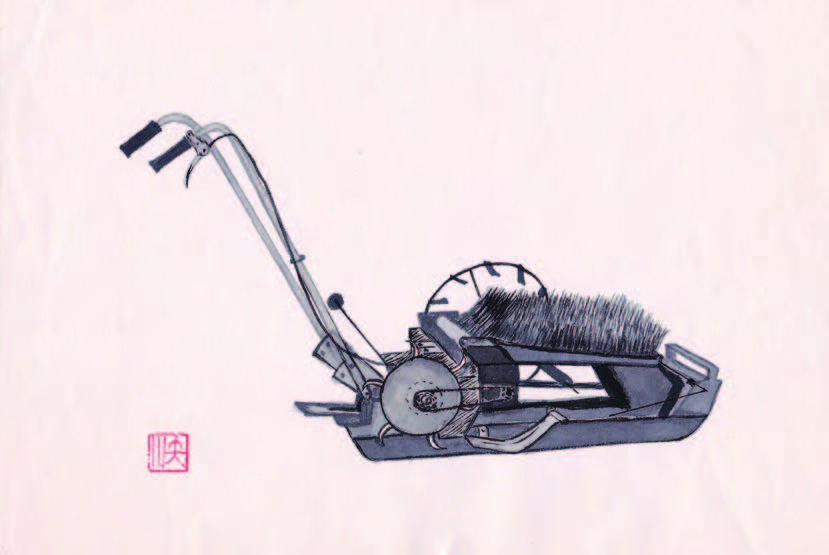 Before World War II, there were few public research institutes involved in developing rice transplanters. Mainstream researchers considered direct seeding to be the best way to lower labor costs in rice production, but this was only possible on large farms. By the mid-1950s, the Ministry of Agriculture and Forestry finally began to take an interest in the problem after news reports about rice planters in Italy and China spread to Japan. In 1958, the Journal of Mechanized Agriculture published an article with the sensational title: “Sptunik in the Sky, Rice Transplanters on the Ground: Exploring Untold Riches and Carrying the Dreams of the Human Race”. In 1961, a rice transplanter study group at the Ministry of Agriculture and Forestry was launched, and both the public and private sectors joined the bandwagon. In 1965, the first commercially sold rice planter was developed; however it was a single row planter that was 7-8 times slower than hand planting (Figure 4). Meanwhile, individual farmers kept contributing new improvements to rice transplanters. 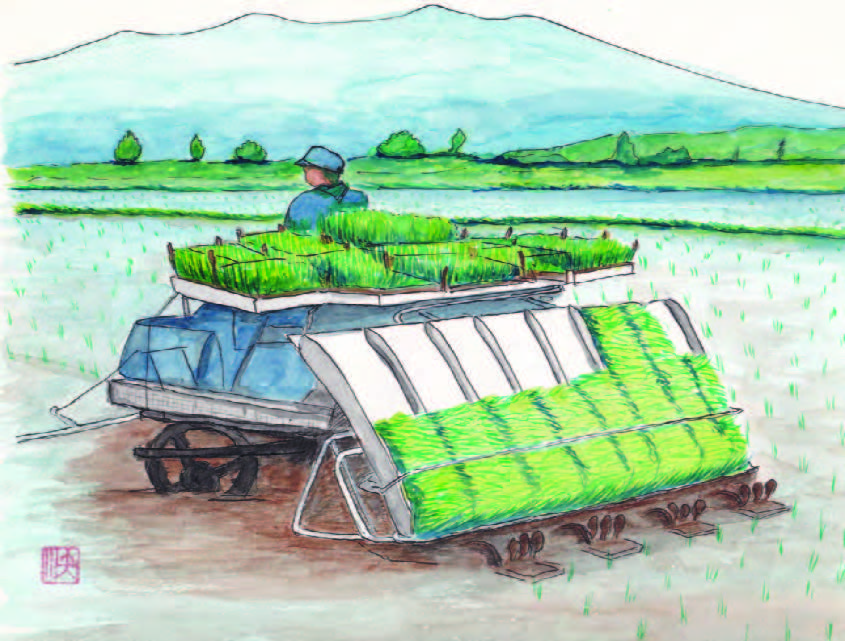 The system developed by Ikuo Yamakage of the National Institute of Agricultural Machinery in 1986, that used revolving offset gears is now used in over 80% of commercial riding rice transplanters. This technology made it possible to control the angles of the planting hooks that transplant the rice seedlings and it allowed for smoother, faster movement. This innovation allowed the transplanter to be mounted onto riding machinery, because it could keep up with the high speed of the moving vehicle. Figure 5 shows a typical modern riding multi-row transplanter.

In the 1950s, rice farming required 2,000 labor-hours per hectare. After machines such as cultivators, harvesters, and in particular, rice transplanters were introduced, the labor requirements dropped dramatically. Today, rice farming hours have been reduced to only 260 labor-hours per hectare. As a result, many of the laborers on rice farms went to work in cities, which were experiencing an economic boom in the 1960s. The invention of the rice transplanter may well have been the most important Japanese innovation of the twentieth century. We should not forget that it exists because of the wisdom and persistence of farmers.

For more information about the history of rice cultivation in Japan, see http://factsanddetails.com/ japan/cat24/sub159/item939.html