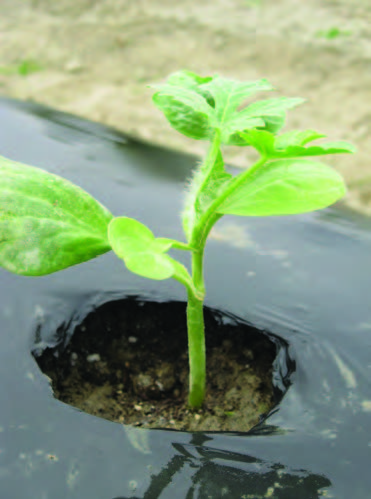 Grafting is an ageold technique used in plant propagation to combine two plants so that one plant provides a desirable rootstock and the other provides desirable fruit characteristics (Fig. 1). While most people are familiar with grafting of fruit trees, grapes, roses and many other fruit and ornamental plants, they may not know that the first record of vegetable grafting was written 1500 years ago in Korea. Grafted watermelon newly transplanted into the field; the top of the grafted plant is called the scion and the bottom is the rootstock.

Grafting is used for vegetable production for three primary reasons: 1) to control soil-borne diseases, 2) to overcome salinity issues, and 3) to increase crop vigor under temperature stress. In addition, depending on rootstocks, grafted vegetables can be more tolerant of saturated soils, 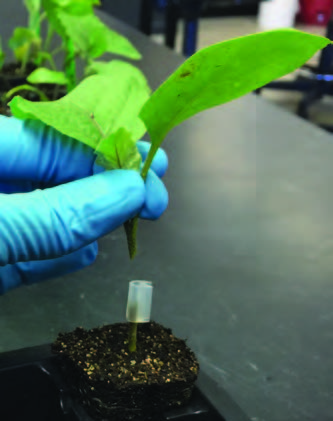 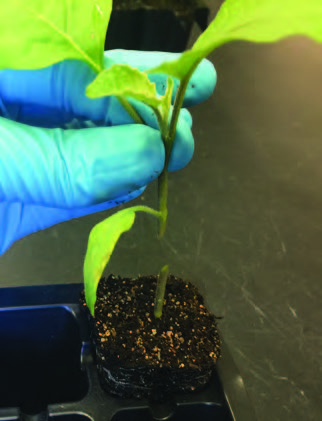 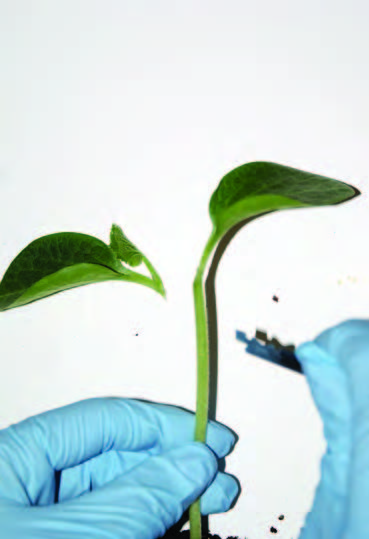 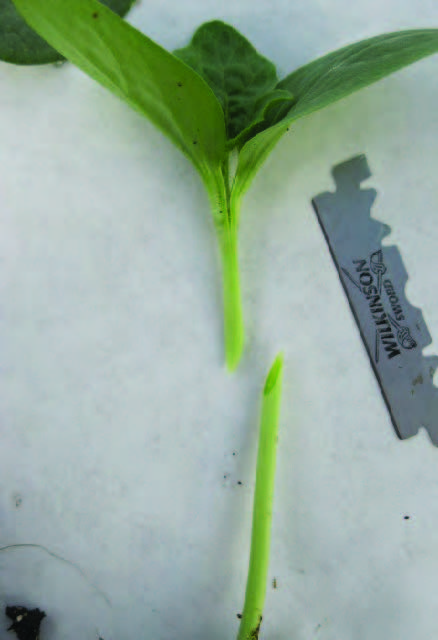 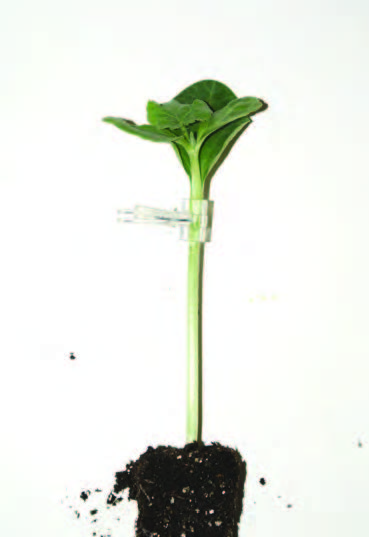 Growers can graft their own vegetable transplants, but should follow guides for grafting and healing to ensure success. Guides for grafting eggplant, tomato and watermelon can be found at Washington State University, http://vegetables.wsu.edu/ graftingVegetables.html#information, and are also available in Spanish. Seedlings are grafted when they have 1-2 true leaves, and a double edged, thin razor blade is used to cut the plants. For eggplant and tomato, the splice grafting method is used, and is rapid and simple to learn. 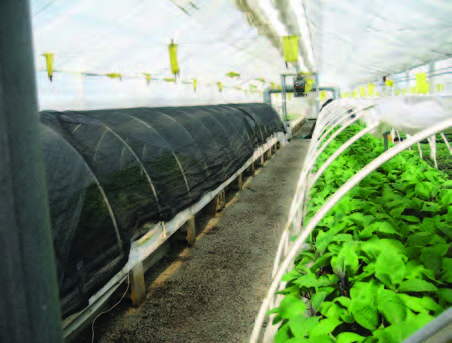 The rootstock and the scion are both cut at a 45o angle about ½-1 inch below the cotyledons, a grafting clip is placed on the rootstock, and the scion is slipped into the clip (Fig. 2). For watermelon, the one-cotyledon splice method is used, and takes more time and effort. The rootstock is cut at a 60o angle such that one cotyledon and the apical meristem is removed (Fig 3). To prevent rootstock regrowth, the meristem bud at the base of the remaining cotyledon is removed by swiping the edge of the blade back and forth over the bud tissue. The scion is cut at a 60o angle below both cotyledons, and the two plants are clipped together.

Place grafted plants immediately into a healing chamber where humidity is 80-95% and light is limited by heavy shade cloth. Healing can be carried out in a low tunnel or in a healing chamber placed on a bench in the greenhouse (Fig. 4), just be sure to keep temperature within the healing chamber at 70- 73 o F for watermelon and 70-80 o F for eggplant and tomato. Survival of grafted watermelon tends to be lower and less reliable than for other grafted vegetable crops, and watermelon tend to require greater care up to 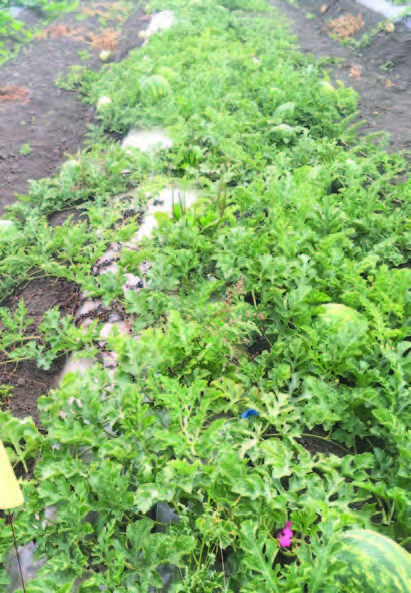 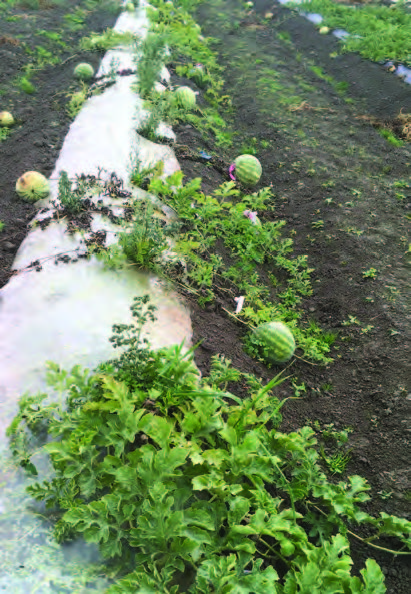 1 week after grafting. In a study at Washington State University, survival of grafted tomato was 98% following grafting, eggplant was 86%, and watermelon ranged from 51% to 80% (Johnson and Miles, 2011). Survival of grafted watermelon tends to be lower than for other grafted vegetable crops due to the susceptibility of the plant to desiccation following the grafting procedure. To minimize water stress after grafting, plants are covered with shade cloth for up to 1 week to reduce transpiration.

Grafting has been shown to be effective against several soil-borne diseases, including fusarium wilt, verticillium wilt, bacterial wilt, southern blight, and also root-knot nematodes. It is important to note that grafted vegetables do not have increased resistance to foliar pathogens. Also, grafting does not appear to have an impact on yield when there is no stress. For example, research studies with heirloom tomato at Washington State University showed grafting provided no benefit when planted in a high tunnel or a field with a low to moderate level of verticillium wilt (up to 25 colony forming units per g of soil) as tomatoes have genetic resistance, even many heirloom varieties. 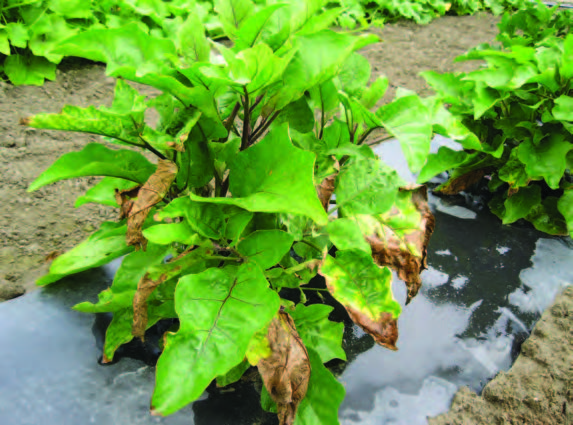 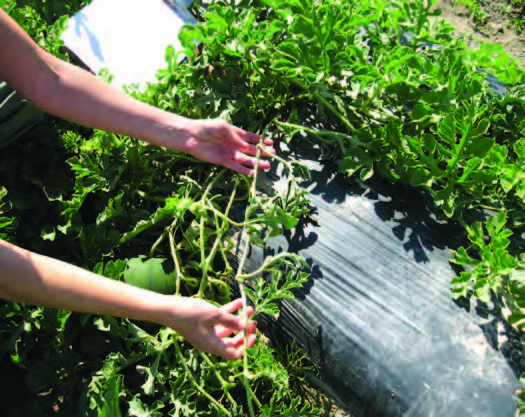 In Washington and Oregon, verticillium wilt affects watermelon and eggplant production, and research carried out by Washington State University has shown that grafting can provide effective control (Fig. 5). Symptoms of verticillium wilt include wilting of leaves, and a single vine or branch on a plant will wilt, and v-shaped yellow chlorosis on leaves (Fig. 6). Grafting tends to be cost-effective when soil levels of Verticillium dahliae, the pathogen that causes verticillium wilt, are greater than 5 colony forming units (cfu) per gram of soil. The Oregon State University Plant Clinic/Extension Plant Pathology Laboratory in Hermiston can test soil samples for V. dahliae, contact the laboratory for more information, http://plant-clinic.bpp.oregonstate. edu/services-and-fees/.

Although grafting holds promise as a disease management strategy especially for watermelon and eggplant producers in Washington and Oregon, use is limited due in part to the cost of grafted transplants. Increased production costs related to grafting include extra seed and greenhouse facilities needed to grow rootstock seedlings, skilled labor needed for grafting, and special facilities required for successful healing of the grafted plants (Dabirian and Miles, 2017). Growers can purchase grafted transplants, see http:// www.vegetablegrafting.org/resources/suppliers/ for a list of commercial suppliers in North America.

For those interested in teaching vegetable grafting, Washington State University has developed a guide to hosting a grafting workshop, see http://www.vegetablegrafting. org/?s=grafting+manual&x=0&y=0.