Cover crops receive a lot of attention for the many benefits they can provide, such as: weed suppression, erosion prevention, improved water infiltration and water holding capacity, improved nutrient cycling, and the creation of pollinator habitat. There is an abundance of information in academic literature and from seed companies on the use of cover crops; however, there is only anecdotal evidence of cover crop performance in central Oregon. In addition, there are so many options including species, varieties, and planting time that it can be hard to decide which cover crops are right for a farm. In response to local interest from growers, Clare Sullivan (Small Farms Extension, Deschutes County) designed and planted three trials in 2018 to demonstrate the growth and success of different cover crops species planted at different timings in central Oregon.

All three trials were planted at the Central Oregon Agriculture Research and Extension Center (COAREC) in Madras using small plot research equipment. The trials were fertilized prior to planting using feather meal and perfect blend based on soil test results, and no pesticides were used. Comparing crop emergence and weed suppression among species was a top priority, as weed control is one of the main concerns for organic farmers. Trials were planted to match windows of time growers may have to fit in a cover crop: spring, summer and fall.

The spring trial was planted on 4/16/18 with six replicated treatments: Anaconda radish, Attack mustard, Caliente mustard, crimson clover, Horizon spring pea, and cereal rye. There were also six demonstrations plots planted without replication, including Austrian winter pea, cereal rye/pea mix, and mustard/radish mixtures. All of the species had good emergence within one week of planting, except Caliente mustard (determined seed old and not viable, not representative of variety) and crimson clover (very slow to establish). 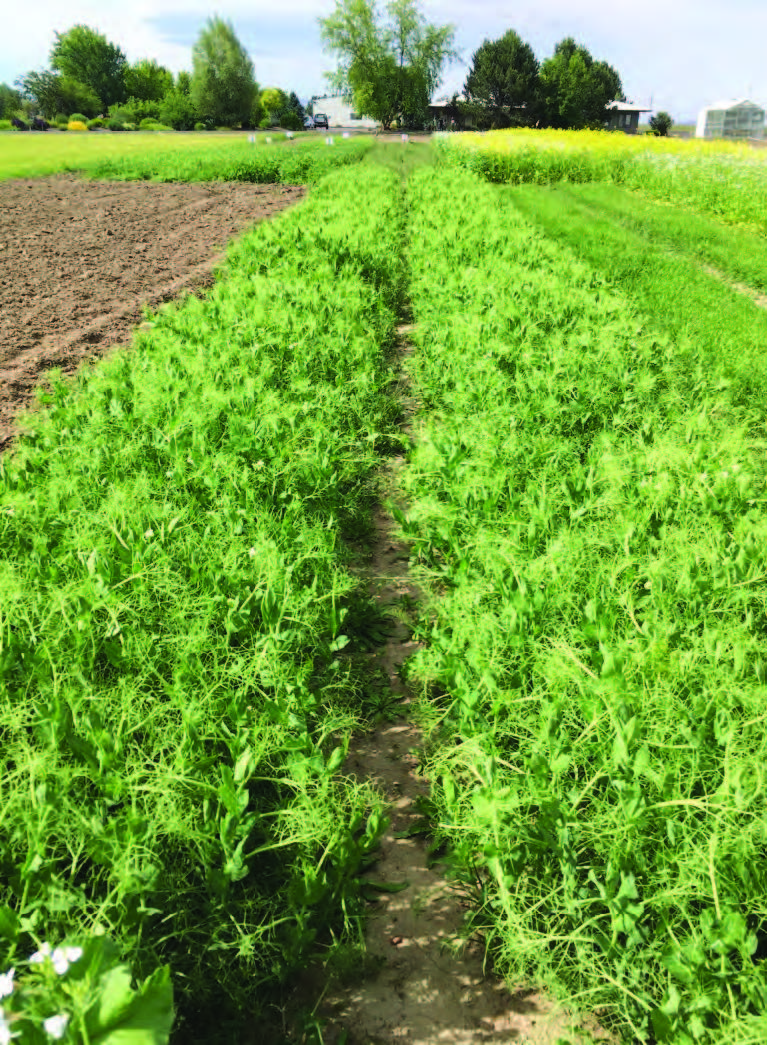 The cereal rye and pea species grew the most quickly while soils were cool (~55-58°F), but mustard and radish species caught up as soils warmed later in May. The Caliente mustard and crimson clover plots became overrun with weeds and were discounted as treatments. Cover crop biomass samples of the remaining plots were collected at full flower prior to termination: mustard and radish plots were sampled 8 weeks after planting (6/12/18); and cereal rye and pea plots were sampled 9 weeks after planting (6/19/18). Both biomass samples and weed counts were taken from two, 0.5m2 quadrats per plot.

Of the four replicated treatments, Horizon spring pea put on the most biomass (2691 lb/ac), followed closely by radish and Attack mustard, and cereal rye produced the least biomass (Table 1). All four species were competitive against weeds (<2 weeds/ft2), but radish with its broadleaf canopy really excelled at weed suppression (Table 1). The Attack mustard and Horizon spring pea plots had more upright growth habits that allowed for more weed growth. Although not replicated, the Austrian winter pea in the demonstration plots provided comparable biomass (2668 lb/ac) to the spring pea, and improved weed suppression (0.5 weeds/ft2) due to its prostrate growth habit. The cereal rye/pea and mustard/radish mixtures did not produce as much biomass as the single species counterparts (data not shown).

The summer trial was planted on 6/6/18 with six replicated treatments: Attack mustard, buckwheat, cow pea, phacelia, sorghum, and sudangrass. As in the summer trial, there were additional demonstrations plots planted without replication, including: Anaconda radish, Caliente mustard, buckwheat mixtures, and Saia oats. Emergence was less successful in the summer planting than the spring trial, with several species struggling to establish well. Summer annual weed pressure was very heavy, especially from redroot pigweed (Amaranthus retroflexus). The sorghum plots established very poorly, and it was determined the germination rate was very low. The cow pea and sunn hemp plots also established poorly, likely due to temperatures not being warm enough. Both sorghum and cow pea plots were discounted as treatments, leaving four replicated cover species to be evaluated.

Cover crop biomass samples were collected 7 weeks after planting (7/25/18) at full flower prior to termination. Both biomass samples and weed counts were taken from two, 0.5m2 quadrats per plot. Of the four replicated treatments, buckwheat and sudangrass produced the most biomass (~2100 lb/ac), and Attack mustard and phacelia produced a smaller, similar amount (Table 2). All four species struggled to be as competitive against weeds as compared to the spring planting date, but phacelia provided the most weed suppression (2.8 weeds/ft2). Although not replicated, the Caliente mustard in the demonstration plots produced the most biomass in the summer series (2850 lb/ac), and the Anaconda radish provided the most weed suppression (<2 weeds/ft2).

Fall trial The fall trial was planted on 9/14/18 to eight replicated treatments of legume, brassica, and cereal combinations. The cover crops are being overwintered and results will be available in the spring. 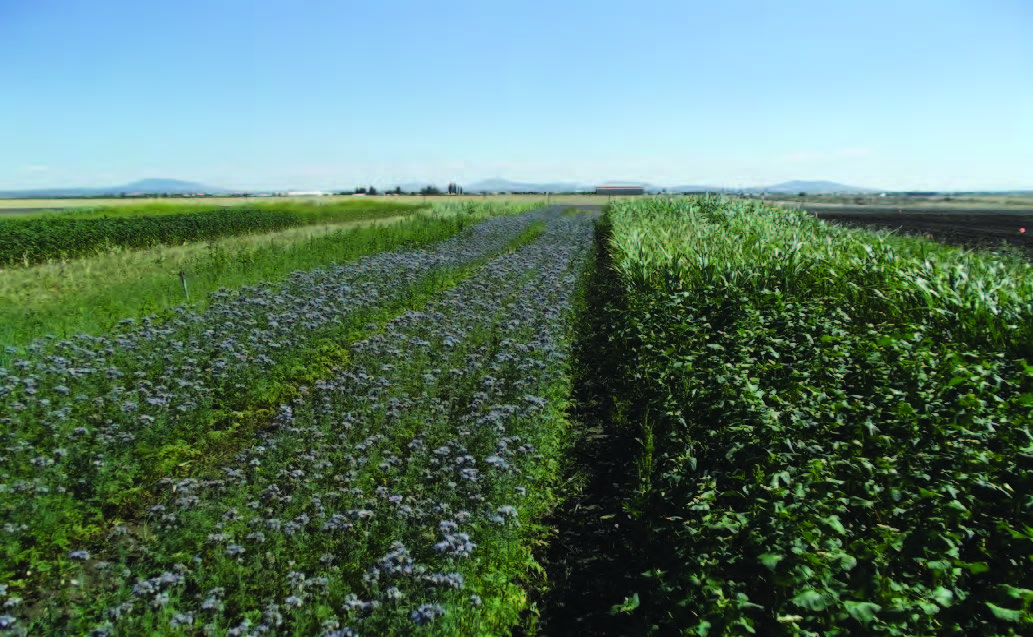 Thoughts so far In selecting a cover crop, it is important for growers to first know why they want to use a cover crop, and what species fit in their rotation. Once a grower knows the ecosystem benefit they want out of their cover crop (i.e. N fixation, weed suppression, biomass production), local data on cover crop performance can help them decide between varieties and species. Based on the preliminary cover crop trials conducted in central Oregon, Anaconda radish and Austrian winter pea seem like a great choice of spring cover crop for weed suppression. Both species establish quickly and have prostrate growth habits that help suppress weeds. Planted at only 10lb/ac, radish costs approximately $10/ac less than planting a pea crop (Table 1); however, if N fixation is a goal, then either spring or winter peas would be a better choice.

The summer cover crops have the benefit of being able to fit in a tight growing window (~6 weeks), and of the cover crops tested buckwheat and sudangrass came out on top for producing the most biomass in the shortest period of time. At the planting rates used in this study, a buckwheat cover crops costs more than double the cost of planting sudangrass (Table 2); however, buckwheat offers pollinator benefits that sudangrass does not. While phacelia did not produce as much biomass as the other species, it provided the best weed suupression and provides excellent pollinator habitat.

Based on the spring and summer trials, crimson clover does not make sense as a short season cover crop, since it establishes so slowly and is not competitive against weeds. Also, based on these trials there were no biomass or weed suppression benefits to cover crop mixes.