In theory cover crops can protect soil from erosion, improve soil tilth, supply nitrogen (N), reduce weeds, provide nectar and pollen for beneficial insects, increase the winter survival of mycorrhyza, help to manage soil-borne diseases, and provide other benefits. In practice, it’s often difficult to establish cover crops in commercial rotations well enough to produce enough ground cover and biomass to realize these potential benefits. The OSU Organic Fertilizer and Cover Crop Calculator (see resources) enables you to estimate the cost and N contribution of cover crops on your farm. This article is based on experience in vegetable rotations but can inform other cropping systems.

Seed is normally the 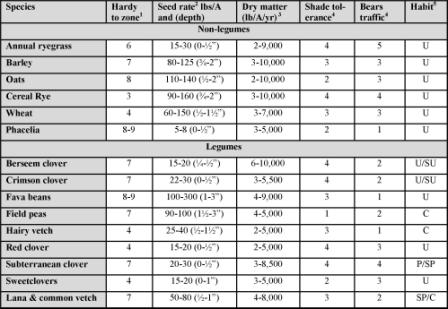 biggest expense in cover cropping. It is tempting to save money by reducing seed rates, especially with legumes, but it is worth using plenty of seed to ensure a good stand. Cheap low quality seed can be problematic especially if they introduce new weeds. Make sure the label has a low weed seed and inert count. Quick establishment of a thick ground cover will compete more effectively with weeds and protect soil aggregates better than a sparse stand. It will also develop more biomass to build organic matter and contribute N. Some small seeded cover crops like clovers and phacelia may seem expensive by the pound, but because of low seeding rates, the cost per acre is often reasonable. Legumes supply plant-available N (PAN) when they decompose, but typically do not supply as much dry matter as grasses. Grasses often establish more quickly in the fall and help reduce erosion and improve soil tilth, but they do not supply plant available N to the following crop. Legumes and many other flowering broadleaf plants provide pollen and nectar as a food source for beneficial insects (i.e. pollinators and natural enemies) in the spring if they are allowed to go to flower.

Mustard (Brassica species) cover crops do not fix nitrogen, but they may have pest management benefits. McGuire (2003) reports that white mustard cover crops can reduce Verticilium dahliae incidence in potato-wheat rotations while also increasing water infiltration rates in soil. Steve Fransen (Washington State University) explained that they grow deep tap roots which break up soil hard pan layers, grow a large amount of leaves and biomass for green manure. A disadvantage is they can have high seed dormancy so you can have volunteers long after you may not want them. Also beware of increasing Brassicas in your rotation if you already have enough to create a risk of club root. If you are near a vegetable Brassica seed producer, make sure pollen from your cover crop doesn’t contaminate their seed crop.

Most experienced organic farmers I work with use mixed stands of legumes and non-legumes (often a grass) to combine the benefits of both types of plant, many non-organic farmers prefer to use grass species. Synthetic N fertilizer is cheaper than organic fertilizer so the relative economic benefit of reducing fertilizer rates by including legumes is smaller in conventional systems. If your goal is to supply N to the following crop, legumes must be well represented in the stand. A pure stand of non-legumes can immobilize N in the short term when it decomposes. If legumes make up about 15-25% of the biomass, they will prevent N immobilization as the cover crop decomposes, but in order to supply large amounts of plant-available N, a cover crop stand should consist of 50% or more legume biomass. Another advertisement, the OSU Organic Fertilizer & Cover Crop Calculator can help you estimate N-contributions from your cover crop stands.

Grasses often establish quickly in the fall and can out compete legumes. After some trial and error I reduce non-legume seed rates to about 20-40% of the single species seed rates listed in table 1, and leave legume seed rates at 80-90% of normal in mixed stands. In bare fields I have had consistently good results by combining a cereal with a climbing legume (i.e. vetch). The vetch uses the grass stems as scaffolding and captures more light.

September is the usually the best time to establish winter cover crops in a bare field in Western Oregon. If seeded too soon (July or August) winter annual cover crops may either go to seed before they can easily be tilled under in the spring, or require more irrigation than is convenient. The risk of planting too late is that the cover crops won’t get established in time to utilize fall heat units. If the cover crops are very small they won’t protect soil during the winter rains and they can be easily killed in waterlogged soil.

Steve Fransen (Washington State University) reports that some marginally winter hardy cover crops like phacelia (in my experience) or fava beans actually do well when planted as late as mid October (see table 1). I’m not the first to notice that when they are planted late and only grow to 2-4” by the time cold weather hits in December, they seem to survive hard freezes better than larger plants. Josh Volk (http://www.slowhandfarm.com/Welcome.html) has observed that planting cover crops in September can also provide better weed control because summer weed seed germination has slowed down and winter annual seed germination has not yet hit full stride. Late summer weeds that do germinate after seeding the cover crop will be killed by the first hard frost, and winter annuals will often be outcompeted by the established cover crop. Alec McErlich (Earthbound Farm) has observed the same thing in the Columbia Basin. 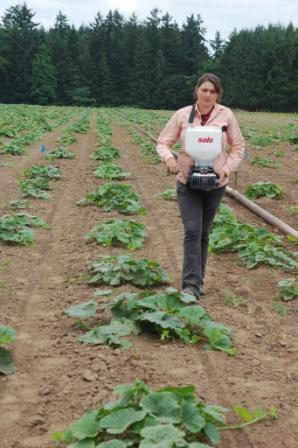 If a field is bear in July or August after a short season crop, at least two strategies are available. Consider using a quick summer crop like buckwheat, sudex (a sorghum x sudhan grass hybrid) and, or a summer legume like forage soybeans followed by a standard winter cover crop or cash crop. Steve Fransen (WSU) recommends short season forage soybean varieties of type 00, 0 or 1 for quick biomass development. Buckwheat normally needs some irrigation in Oregon to produce good biomass because in a dry unirrigated field in the summer buckwheat will go to seed before producing much biomass. Another alternative is to use short-lived perennials that are easy to kill the following spring. I’ve used red clover and perennial ryegrass to good effect.

The elephant in the room points out that many of our favorite vegetables are still in the field in September. I wouldn’t expect anyone to disc in a beautiful crop of tomatoes, eggplants, corn, squash, or peppers in early September in order to plant a cover crop. Some innovative farmers including Jim Bronec (Praying Mantis Farm) have figured out how to interseed vegetables with cover crops. Jim normally broadcasts about 20-25lbs/A of red clover seed into his winter squash crop in mid to late July just before the squash vines cover the field when he’s doing his last weed cultivation. The red clover germinates and gets established before harvest in November; thick in some spots and scrawny in others. During harvest Jim tries to minimize traffic on the clover, but the reality is that a winter squash field gets pretty muddy. Nevertheless, the red clover often survives quite well and rebounds to protect the soil over the winter and provide either a high N cover crop or a seed crop the following year. 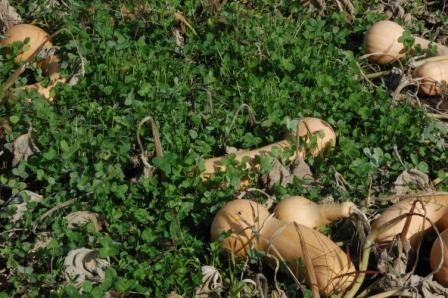 This year at the North Willamette Research & Extension Center in Aurora (https://extension.oregonstate.edu/nwrec) and at collaborating farms, we are interseeding several different cover crop species into winter squash, popcorn, eggplants and peppers. We are also trying about 15 different cover crop species on bare ground to observe their growth habit and phenology. Our interseeding trials were seeded during August this year because crops needed weeding later than normal after the late start to summer this year. Typically some of these trials would have been seeded in July.

At the time of writing, fall also seems to be getting an early start. We are just beginning these trials so I don’t have much experience with interseeding yet. I currently assume that a cover crop well adapted to interseeding should tolerate shade and traffic well, and not have a climbing growth habit (see table 1). It is sometimes useful that smaller seeded cover crops (as indicated by low per acre seed rates) will still usually establish well even if it is difficult to properly incorporate the seed in a cash crop canopy that has become too tall or thick to drive through. Small seeded crops establish better when left near the surface. 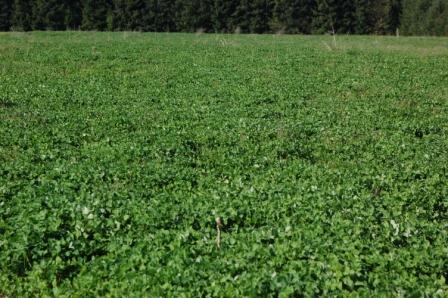 Seed drills provide excellent percent germination because seed depth and uniformity can then it would have supplied about 60 lbs PAN/A, Jim grew it out as a seed crop. Photo be controlled more accurately. Therefore, recommended seed rates are often higher for broadcast seeders (see Managing Cover Crops Profitably under resources). Seed drills work very well in one pass but not all farms have seed drills and they are not easily adapted to interseeding.

When using a broadcast seeder try to ensure good seed to soil contact with light cultivation and/or a ring roller. Irrigation can help work seed into the soil when mechanical seed incorporation is impractical (i.e. late interseeding).

Experienced farmers often try to time cover crop seeding just before fall rains to minimize the need for irrigation. However, we sometimes have dry weather through mid October (not this year). Although irrigation creates more work and can cost about $25/acre, be sure to irrigate your cover crops when seeding into dry soil. One common weather pattern to watch for is having enough moisture for seeds to germinate followed by warm windy weather to kill seedlings.

I hope these comments help you to adapt cover crops to your situation. Please feel free to contact me at nick.andrews@oregonstate.edu or (503) 678-1264 x149 to discuss our ongoing trials or your cover cropping practices.