A Dim Light Ignited a Century Ago: The Invention of Vegetable Grafting by Farmers 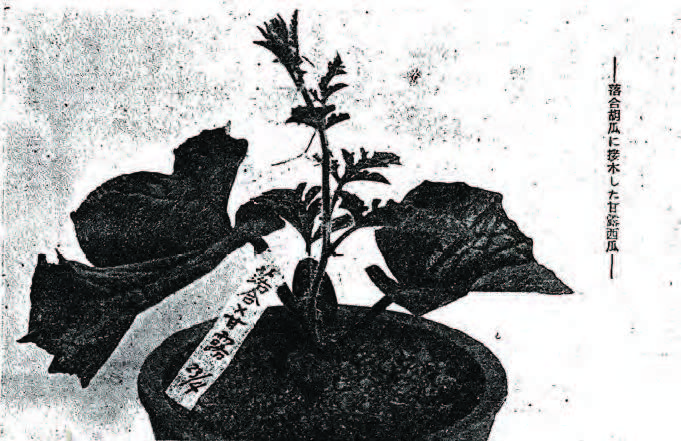 Vegetable grafting can prevent soil diseases, encourage growth in cold temperatures, enhance vigor and make continuous planting possible. As environmental issues gain more attention, grafting is becoming even more important, since it conveys benefits without the use of agricultural chemicals. Although grafting is a slow process, that is changing with the use of grafting robots.

Fruit trees and grapevines have been grafted since ancient times. By the end of the mid 19thcentury, grafting was standard practice in Japanese tree fruit production. A book published in 1859 by the agronomist Nagatsune Okura described how to graft grapes and oranges along with detailed illustrations. Although Lagenaria gourds were grafted to increase fruit size in China as early as the 5th century, vegetable grafting has only recently become common. So, who came up with the idea to graft tiny vegetable seedlings one by one?

According to several reports, a farmer in the Akashi Region of Japan was the first to graft a watermelon onto a Japanese Cucurbita moschata squash in 1927. His name was Chozo Takenaka of Hayashizaki Village in the Akashi region. Akashi was a watermelon production area during the economic boom that followed World War I. However, there was an outbreak of Fusarium wilt, and the disease spread as the watermelon acreage increased. Takenaka had likely tried to imitate the grafting of fruit trees. After experiencing success, he told others about it, and the technique spread. Another article published in 1931 also mentioned that eggplants were being grafted onto Solanum integrifolium to prevent bacterial wilt.

It is also possible that watermelon grafting may have been discovered independently by several farmers around the same time. As early as 1931, 60 hectares of grafted watermelons were being grown in the Chiba Prefecture, which was another watermelon growing region. Vegetable seedlings were grafted onto the same or different species, and even different families in some cases. This was an historical breakthrough comparable to today’s biotechnology.

After vegetable grafting was initiated, a great deal of research was done at Japanese agricultural experiment stations to refine the technique. Notable advances were made by Seizo Watanabe and Jutaro Murata in the watermelon regions of Chiba and Nara. They introduced Lagenaria siceraria as a rootstock, and implemented a simpler technique using plants at the primary leaf stage. Due to these new approaches, grafting spread rapidly. 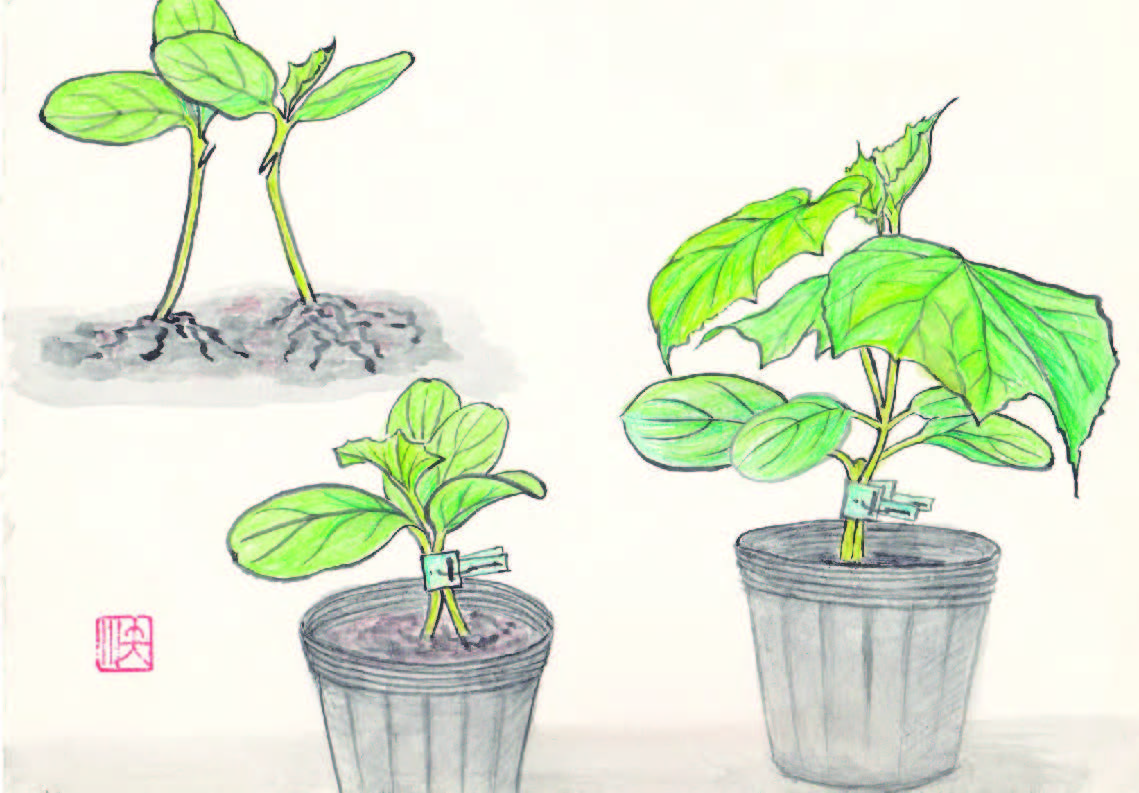 In addition to the mainstream research, special mention must be made of Koshiro Tateishi, a principal at the Soegami Agricultural School in Nara. His report on how to choose rootstocks and results of performance trials were published in 1931. The academic report was unusual for its time in that he included many photos, such as one of a greenhouse full of grafted watermelon fruit. Tateishi encouraged neighboring farmers to start grafting, and his report conveyed the enthusiasm about watermelon production at that time.

Cucumber grafting was initiated by Mitsuharu Ishibashi at the Chiba Agriculture Research Station in 1957. He proved that grafting encouraged shoot growth at lower temperatures, and reduced problems with pests and soilborne diseases including Fusarium wilt (Fusarium oxysporum). Grafting spread further throughout Japan when a simple technique using clips was developed by Takeo Fujii of the Chiba University Horticulture Department in 1964. Grafting of eggplants and melons became more popular after the mid-1960s. For eggplants, the ornamental eggplant or “pumpkin tree” (Solanum integrifolium) was used as a rootstock against bacterial wilt (Ralstonia solanaearum).

In recent years, the most widely used method of grafting is known in Japan as the Zen-Noh system, which was developed by Toshitaka Itagi at the Zen- Noh agricultural technology center in 1990. Itagi had been the president of the Kanagawa Horticultural Experiment Station and the director of the research station at the National Agricultural Research Center. He moved to Zen-Noh after his retirement, and put all his efforts into developing simpler grafting techniques in plastic plug trays, which had recently been introduced from the US. At the time, cucumbers were usually grafted after the emergence of the first true leaf, and eggplants and tomatoes were grafted after the fourth or fifth true leaf. Itagi made it possible to perform grafts before the cotyledon opened on cucumbers, and at the 2.5 leaf stage for eggplants and tomatoes. Many people thought plants at these stages were too young to be grafted, but Itagi proved them wrong by introducing three new innovations: First, he cut the angle at 30 degrees to increase the contact surface and make the stems easier to press together. Second, he used soft plastic tubes with a vertical slit to support the grafting point. He used several different sized tubes, which come off as the seedlings grow. Third, he built a container to provide optimum humidity, light and wind conditions, which increased his success rate to almost 100 percent. 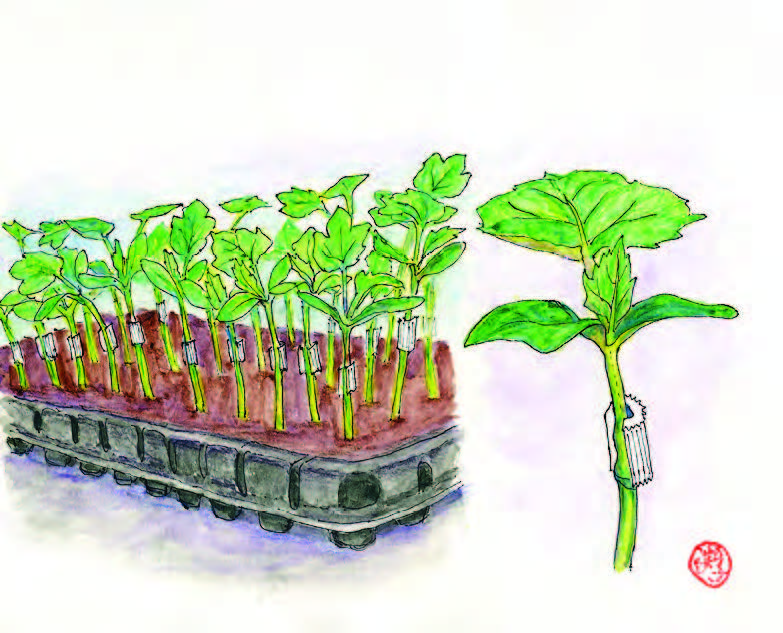 The Zen-Noh method also increased the speed of grafting. Previously, 400-500 grafts could be made per person per day. The Zen-Noh method made it possible to graft between 1,000 and 1,200 per day. In an interview with the author of this article, Itagi emphasized that the plastic tubing was the key to the success of his method. He recalled that one day he happened to visit a store that sold screen windows. It was the plastic fasteners that kept the screen on the wooden frames gave him the idea. New ideas can come in unexpected places!

In Japan, the percentage of vegetable planting acreage using grafting is: watermelon: 93.9%, cucumber 92.6%, melon: 32.0%, tomato: 57.7%, eggplants: 79.0% and hot/ sweet peppers: 13.5% (2009 survey by NARO Institute of Vegetable and Tea Science). In Europe, 130 million vegetables were grafted in Spain in 2009, and 59 million were grafted in Italy in 2010 (data compiled by Dr. Perez-Alfocea). In North America 40 million tomatoes, principally for hydroponics, were grafted in 2006 (estimated figure by Dr. Kubota). Farmers who need solutions are often the best and most appropriate innovators. In the case of grafting, a dim light ignited by a farmer over 80 years ago now shines more brightly than the person who invented it could have possibly imagined.