Blueberries are an increasingly common high-value crop for small farmers across Oregon. Research has shown that blueberries favor acidic soils that are high in organic matter. In Oregon, blueberries have traditionally been grown in fir sawdust, which in the past has been freely available, relatively cheap, and tends to be acidic. Sawdust has traditionally been used in blueberry plantings as a mulch and in some cases is incorporated into the soil during planting. However, with the decline in lumber needed for housing and the increase in wood products for biofuel usage, sawdust has increasingly become more rare and expensive. Also, sawdust application often increases the need for nitrogen fertilizer, because microbes require extra nitrogen to fuel the sawdust decomposition process. Because of these factors, some Oregon farmers have begun looking for alternatives to sawdust.

Compost: Good For The Soil, Plants and Farmers

The use of composts in blueberry production has many potential benefits. Not only is it an efficient method of managing waste streams and recycling nutrients, it also increases soil tilth and can decrease the need for fertilizer applications by supplying a variety of nutrients to the plants with less immobilization of nitrogen. Some farms located near sources of waste streams such as dairies or vegetable processing facilities will receive a “tipping fee” for receiving and processing the waste on their farm. For more on composting benefits, methods and other information, see Kristin Pool’s article in Small Farm News Fall 2008 and the On-Farm Composting Handbook (NRAES-54). 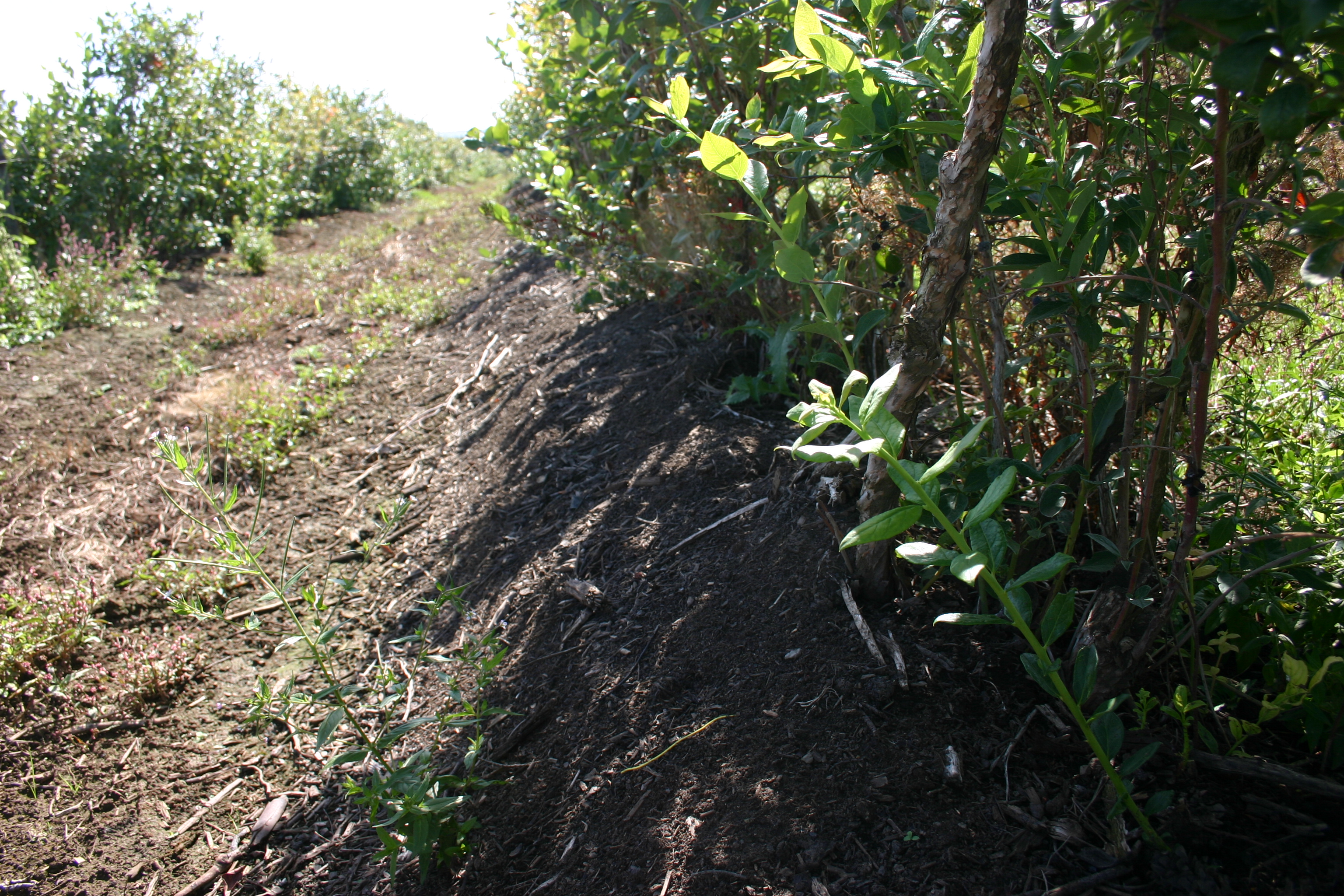 Dan Sullivan, Associate Professor at Oregon State University, along with graduate student Ryan Costello, has begun a research project this year to evaluate the use of composts in blueberry production. In partnership with Small Farms Extension Agent Nick Andrews and his staff at the North Willamette Research Station, the research during 2009 has focused on making various kinds of composts out of feedstocks which are freely available to Oregon farmers. The feedstocks being evaluated include dairy solids, spent hops, spoiled grass hay, broiler littler, landscape trimmings, mint hay, grape pomace, and vegetable processing waste.

The ongoing research also involves trials to amend the composts with elemental sulfur to drop the pH, as finished composts usually end up at a pH of around 7. The finished composts, with pH both amended and non-amended, will be evaluated through trials with potted blueberry plants in the winter and summer of 2010. Additional research is also being conducted to evaluate the sensitivity of blueberries to salinity, as some composts (especially those that are manurebased) can be high in salts and amending composts with sulfur increases salts.

The following two case studies of small farms in Oregon illustrate the wide variety of ways that compost can be made and used in blueberry production: 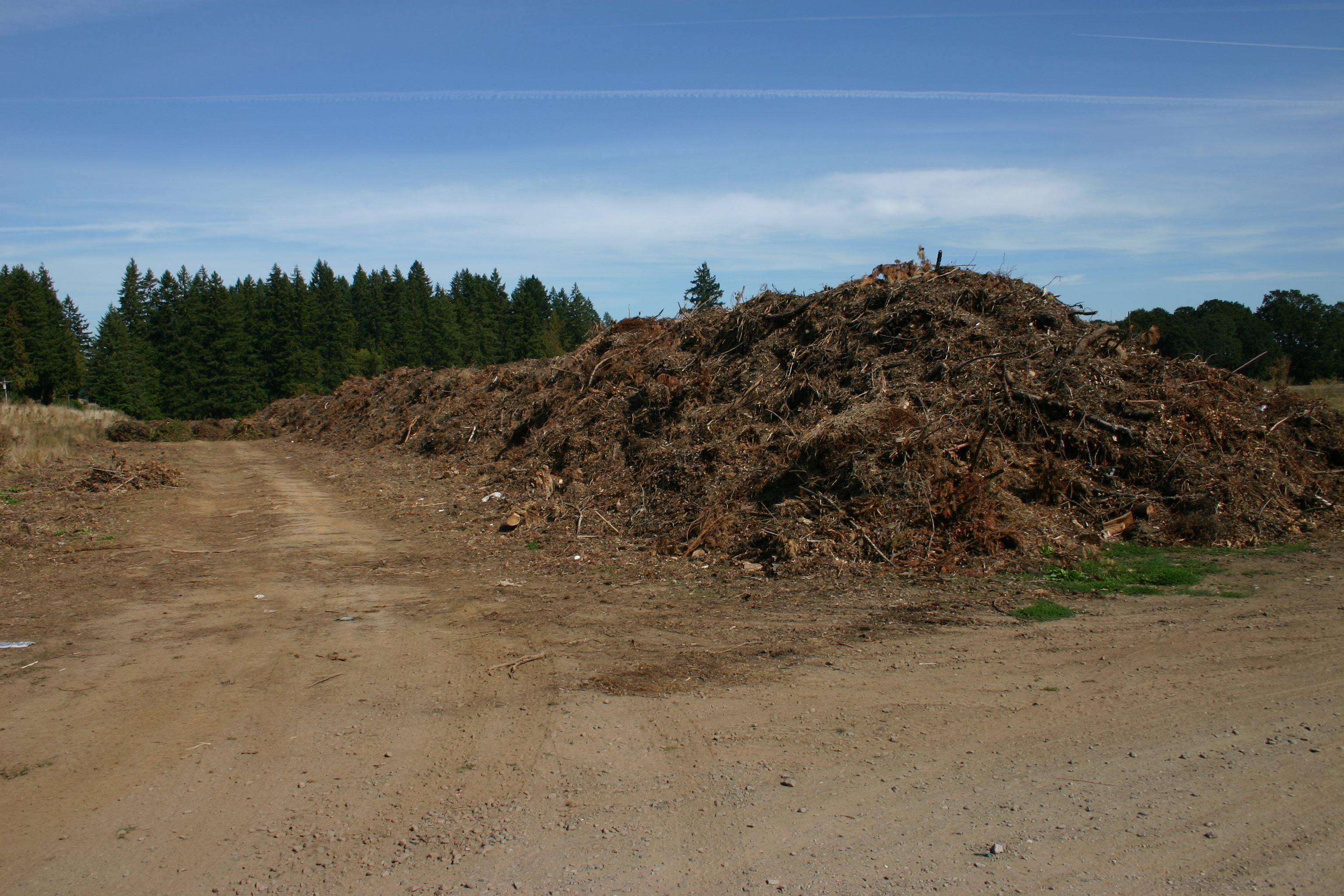 N2K is a blueberry farm which has been in business for over 20 years in Hillsboro, Oregon. The farm has 86 acres planted to northern highbush blueberries of several varieties, with the major variety being Duke. Around 18 months ago N2K’s owner, Chuck Rood, entered into an agreement with a local yard debris recycler.

The recycling company delivers treetrimming residues to the farm, usually delivering a truckload once per day. The residues are deposited in long windrows, 10-15 feet tall and 15-20 feet wide at the base. No additional water is added to the windrows, which are allowed to sit for 6-8 months without disturbance. After at least 6 months, the yard debris recycling company brings a grinder to the site and grinds the composted residues. N2K then pays the recycling company a small fee to use the grinded compost on their farm, which Chuck has stated is significantly less than he was paying for sawdust.

The compost is used to replace sawdust. It is usually applied at a depth of around 2 inches, and the application is made with a mulch spreader that is towed behind a tractor. The Field Manager, Joe Guerrero, stated that the mulch spreader does occasionally have some problems handling the larger sized woody particles of the compost which can cause the spreader to jam, but that it is still able to functionally spread the compost. 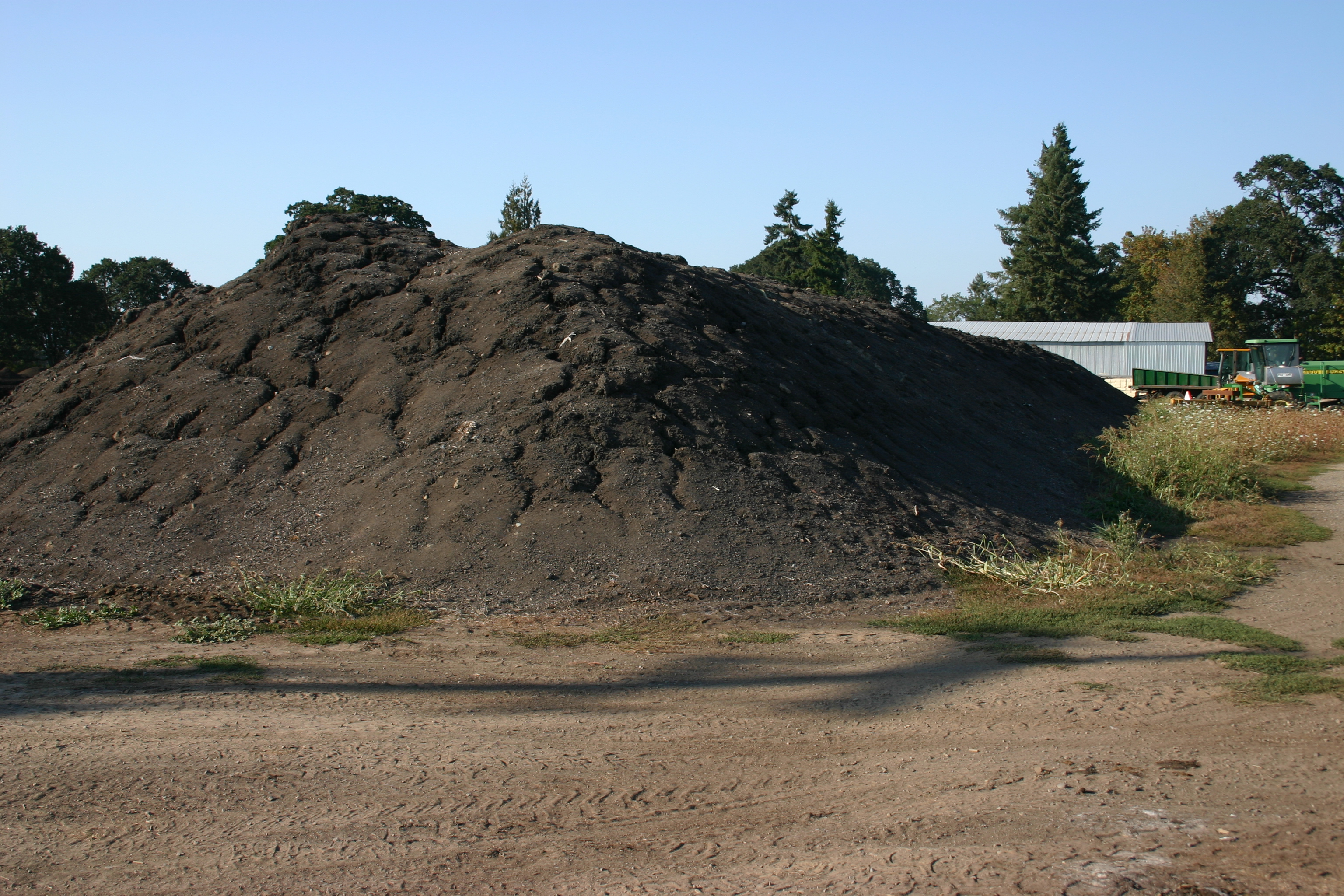 Wilt Farms is an organic blueberry farm outside of Corvallis that is owned and managed by Bob Wilt. The farm has around 75 acres of northern highbush blueberry, with varieties including Bluecrop, Jersey and Duke. The farm includes blueberry plants up to 40 years old, the original blueberry plants that Bob helped to plant with his father when the farm was started. The farm was conventionally managed up until the last decade, when Wilt Farms made the shift to organic and began using compost.

The compost at Wilt Farms is made from many different locally available waste streams, including horse, cow and chicken manure, sawdust, straw, and seed screenings. These different organic materials are mixed into long windrows where they will be turned an average of once a week with a ride-on compost turner for 12-14 weeks. The compost piles are carefully managed during the “active” phase and the mix is adjusted if the temperatures are too low or too high, and moisture added if needed. Once this active phase is done and the pile’s temperature drops below 110F the windrows are moved into a large pile and left to cure for at least 1 year before application, leaving a fine particle size for the finished product. The compost is usually applied at a depth of around 3/8” with a sawdust spreader, although the farm is currently working to fabricate their own large capacity over-therow compost spreader. 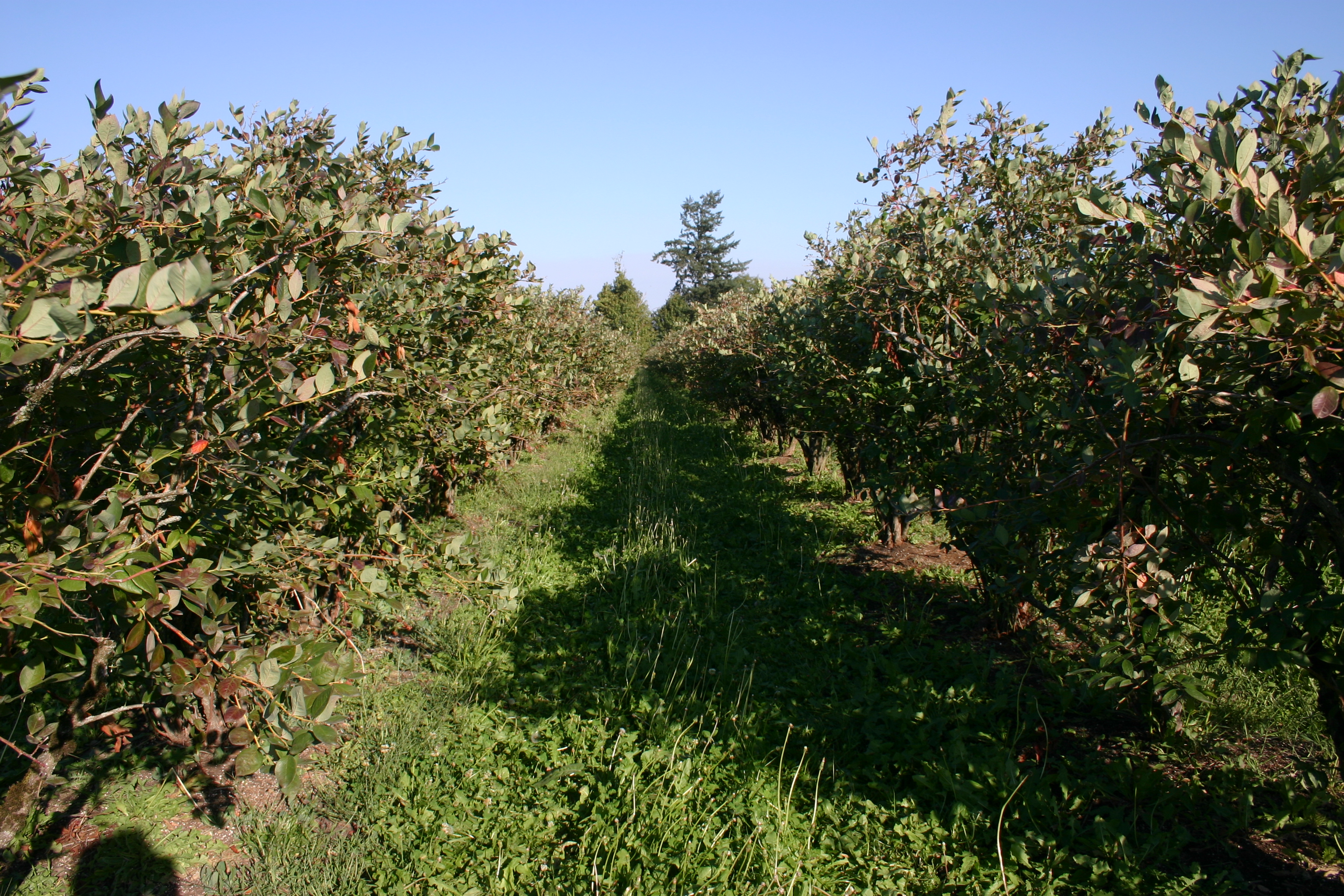 Bob has stated that for the last five years compost has been, “The cornerstone of the nutrition for our farm, so we work at it pretty hard.” He has significantly decreased the nitrogen fertilizer application rate to his fields since he began applying compost. He stated that he has seen a decrease in the amount of diseases and harmful pests, and has also seen the infiltration rate of his soil greatly increase. Bob also reports that penetrometer measurements demonstrate reduced soil compaction with compost (soil is looser) application, making it more suitable for roots.

To Find Out More

The North Willamette Research Station is planning a composting workshop for spring, 2010. Participants will how to manage and produce compost. Contact Nick Andrews Nick.Andrews@oregonstate.edu for more details on the workshop. Contact Ryan Costello at Ryan.Costello@oregonstate.edu to learn more about the OSU composting research discussed in this article.