Seed Remnants of a Willamette Valley Tomato Industry: Saving seed, passing it on & being present

As a child, I understood that old Sunday school song to mean that if I got too focused on the tasks at hand I’d miss the good stuff. So when Jim Stephens said hello to me while I was rushing through my favorite bakery, Lion’s Share in Independence, during the height of planting season it would have been natural to wave hello and rush on. But the lure of the “banquet” meant I stayed for a chat. I’m so glad I did. During our conversation about farming Jim told me he had some tomato seeds I might be interested in. He proceeded to tell me about a tomato that some very old friends of his had grown for their entire lives, one they called the “Jory” tomato. The ‘Jory’ tomato had purportedly filled both the fields and canneries of the Willamette Valley during the very early 1900s. It’s reported to be prolific, well adapted to our summers and tasty. 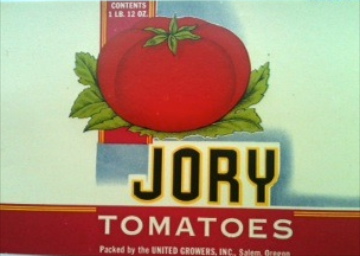 We assume based on the era and the parts of the valley the ‘Jory’ was known to have grown, in the Mt Angel area and other parts of Marion and Polk counties that it was probably dry farmed. As a small farmer who grows lots of heirloom tomatoes, many dry farmed, I was more than a little intrigued. Jim promised to leave some seeds in a package at the bakery we both frequent.

Several days later the package arrived. It included a ‘Jory’ tomato can label that Jim, a label collector, had found, a note and one of those precious tiny envelopes of seeds. It was so tiny but it felt so heavy. It contains the work of 90, or more, years of seed saving. Those seeds hold potential genetic material precious to us who farm here and try to do it with less water and to those who want really good tomatoes. It conjures up the vision of women in their 90’s saving their best tomatoes, carefully preparing and storing the seeds, having done that their entire lives.

Jim’s learned a little more about these tomatoes since. They also grow very well on the Washington coast and they probably originated in Portugal. The cannery called “United Growers Inc.” in Salem involved the Jory family and called many of their products “Jory.” They were around at least into the 1950’s. I love looking at a tomato label that proudly states, “grown and packed in the Willamette Valley”, as if tomatoes from here were renowned.

Of course, we know our valley tomatoes can be tasty but growing them on a scale and efficiently enough for canning seems like a fools errand here. So maybe that’s what this tomato can teach us. Growing good tasting tomatoes to scale can be done, it has been done. It’s our assignment to look back while we look ahead and figure out how.

It seems to me that heirloom seeds of real value don’t come down the generations without time for storytelling because in the story are the keys to their potential.

So my winter assignments are to put ‘Jory’ seeds into the hands of a few of my favorite small farmers and seed savers and see if I can find out more about these tomatoes. There are 80 and 90 year olds to call. There is a box of letters in the Oregon Historical Society archives to read. There is a greenhouse to ready for next years tomatoes. There are “banquets” not to miss.