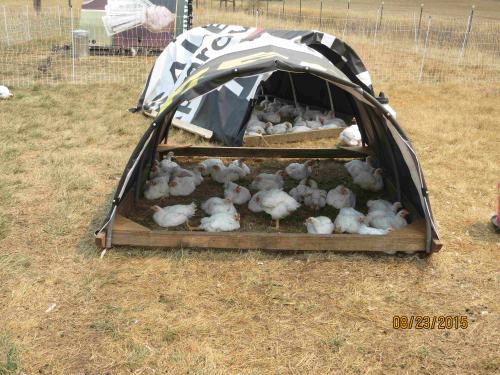 Interest in alternatives to conventional poultry feed – including feeds that are both GMO-free and not corn- and soy-based – is growing among local poultry producers, partly in response to requests from their customers. Given the cost and limited supply of these alternative feeds, producers need to assess the effect on overall profitability.

The research involved side-by-side production trials but also tracked sales of the birds to see if there was a consumer preference for either and if the higher cost of production (for the birds fed with GMO-free feed) could be offset by a higher price per pound.

The three related questions addressed by the research were:

We ran four sets of side-by-side trials of 150 Cornish Cross chickens divided into two sides of 75 chickens each. Chicks were purchased from Jenks Hatchery in Tangent and picked up at the hatchery on the day of hatch. Chicks were set up in our brooder house with identical set ups of feeders and waters and heat lamps. Chicks were given electrolytes in the water for first two days.

Conventional fed birds were fed Payback Fryer Ration purchased from Pleasant Hill Feed, starting with one sack of crumbles and then pellets.

Both feeds were bought at the one ton discounted rate of $559.50 for Payback Fryer Ration and $960.00 for Union Point GMO Free fryer ration.

Feed was stored in separate metal trash cans with cards taped inside lids to track numbers of sacks and any mortalities. Feed cans were moved with birds from brooder house to chick shacks to field. Cards were collected and tallied when the birds went to the processor.

The birds spent two weeks in the brooder house, two weeks in the chick shacks, and three weeks on pasture in electronet fencing paddocks, ~5625 sq. ft., with mobile shade structures. The paddocks were moved once a week. Brooder and chick shacks had access to fenced outdoor areas.

On the day of processing, chickens were loaded into crates marked GMO free or conventional to enable separation and tabulation at Mineral Springs Poultry Processing http://www.mineralspringspoultry.com/

To tally the weights we divided weights into .5 lb increments e.g. 2.5-3lbs 3-3.5lbs and marked how many of each from each group. Weights did not include livers or hearts. 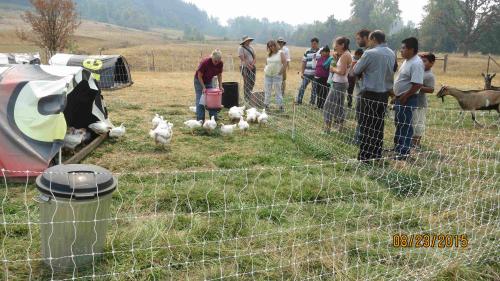 Dressed Weight: The difference in dressed weight of the birds was 3.4 lb. avg. for GMO Free vs. 3.66 for Conventional. We believe that this difference in dressed weights can be at least partly attributed to the fact that once there were fewer birds in the Conventional group due to mortalities, there was more room at the feeder. In addition, the GMO free feed was likely more nutritionally dense, causing the birds to feel “full” so that they didn’t eat as much.

Cost Difference: We calculated a cost of production that included chicks, feed, labor, processing, and transportation. On average, the GMO free birds cost $0.41 per pound or $1.40 per bird more than the conventional birds.

We increased the cost of the GMO free birds by $0.50/ lb to reflect the higher cost of production, but we found that most consumer direct customers had no problem paying the extra amount. Pricing was as follows:

To assure that the GMO-free feed did not adversely affect the taste of the chicken – critical to customers coming back for more – we did a comparison taste test at the Springfield Farmers’ Market. Customers had no clear taste choice, and when our team sampled the two types, we didn’t discern a taste difference either. We expect that the fact that both sets of birds were raised on pasture was more important to taste than the specific feed.

Conclusion and next steps

As a result of this research, we have decided that for the next growing season we will only use the Union Point GMO Free feed for our meat chickens. We are hoping that with increased demand for this feed, more local grain and forage farmers will start growing the components necessary to make the feed. That would lower the input costs for Union Point and, we hope, allow that savings to be passed on to poultry farmers. In addition, next season Phoenix Farm Enterprises, Inc. will be doing a trial planting of feed peas, with the goal of providing most of the components for a custom feed for the farm.

If you have questions or would like to receive the full research report, contact Angela Andre, Farm Director, at angela@interact-nature.com

Phoenix Farm Enterprises offers DIY Poultry Growing and Processing Workshops the last Sunday of each month from May through September. The cost is $25 per farm; lunch is an additional $5.00 person. Participants are welcome to bring up to five of their own birds to process, for $1 per bird