Ponding, Plugging, & Pugging: How to Care for Wet Spring Soils

With another long, wet spring on the horizon for the Pacific Northwest, particular attention should be paid to take care of wet spring soils. As rainfall continues, rivers swell, and fields are saturated well into the estimated production start dates, it may be tempting to go ahead and cultivate fields or open up pastures. In these conditions, however, the potential damage to the soil far outweighs the benefits of an earlier start to the season.

At the most basic level, soils are composed of mineral particles (sand, silt, and clay), and the pore spaces between these particles. Pores are filled with a dynamic balance of air and water, both of which are necessary for soil life, including plant roots and soil biota. Large amounts of rain or irrigation water over short periods of time exceeds the water holding capacity of the soil by filling pore spaces. Under these conditions, known as field capacity, excess water cannot enter the soil and runs off the soil surface. This runoff from local topographic highs can lead to erosive features across bare soils, such as rills and gullies, and results in ponding in local topographic lows.

For these reasons, observations during and after heavy rainfall events can shed light on variations in soil type and condition across the farm. Ponded areas may highlight management problems that lead to increased compaction or may simply reveal areas to avoid for a longer time following rainfall events. Watching the flow of water across from higher to lower landscape positions also offers information as to areas where bare soils pose more erosional threats and where care should be taken to stabilize soils with vegetation or residues throughout the winter and early spring. Water flow after a rainfall event also illustrates how irrigation water is carried by the field and pasture soil, which may explain variations in water availability and plant growth during irrigation season. 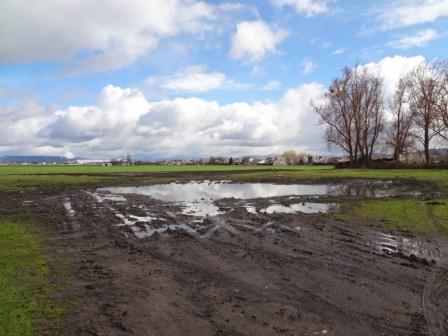 Soil compaction is the most serious threat to wet soils. As soil pore space fills with water, pressure and weight on the soil surface forces soil particles together more easily. When this happens, soil pore space is reduced and plugged with finer soil particles. This reduces not only the water holding capacity and drainage rate of a soil, but also the diffusion and availability of oxygen and nutrients to plant roots and soil microbes. Compaction is shown to reduce yields due to its effects on plant root growth and the availability of air and water, and yield variations across a field can often be attributable to differences in soil compaction.

The effects of compaction, although mediated by some management techniques, are difficult to reverse. The most obvious culprit of compaction is heavy machinery and tillage implements. High animal traffic can also lead to compacted trails or areas around feed or watering troughs, which reduce available forage. When a soil is moist, the effects of these practices on soil compaction are even more pronounced.

A soil does not have to be completely saturated to be vulnerable to compaction. While clay soils are more vulnerable to compaction, sandy soils can also be susceptible given improper management. Checking the moisture conditions of your soil before cultivating will pay off in the long run. As a general rule, soils are too moist for cultivation if they fail the ribbon test or the ball test. For the ribbon test, push the soil between your thumb and forefinger. If the ribbon breaks before 1-2 inches, there is less risk of compaction, but if you form a ribbon form 4-5 inches, the soil is too wet for cultivation. For another test, form the soil into a 2 inch ball. If the ball holds together when thrown into the air, then it is also too moist for cultivation. Soil moisture probes are also available to help determine when the soil water content is too high for cultivation.

Determining soil moisture by feel is really more of an art than a science. The importance of not cultivating a wet soil cannot be overemphasized. When in doubt, waiting a day or two is your best protection against inadvertently damaging the structure of your soil.

Wet soils are also extremely susceptible to pugging by animals. This occurs when animal hooves break through the soil surface, which is less stable when saturated. This trample results in burying or uprooting of pasture plants. Localized compaction also occurs and further comprises pasture productivity. The resulting pugging damage can decrease pasture productivity from 20-80% for the year after the initial damage occurs and up to 20% after pastures appear to have recovered. The unevenness of the pasture surface also reduces forage utilization by animals. Additionally, undesirable weedy species are better able to compete with desired pasture species after pugging damage.

To avoid pugging, it is important to recognize the moisture condition of pasture soils. Under very wet conditions, it may be advisable to keep animals off pastures entirely. Other options include moving electric fences more frequently or increasing the paddock area. Hardening high traffic areas can also improve conditions for animals.

Timing is also an important factor in preventing pasture pugging. The resiliency of a pasture is affected by its vegetative cover, with bare soils being more susceptible to pugging. For this reason, the strength of grass roots, which increases with new pasture growth in the spring, is an important consideration in timing turning animals out in pasture to prevent pugging. Since seasonal variations in rainfall as well as previous year’s grazing affect the strength of pasture roots, there is no definitive time to let animals out on pasture. The best rule of thumb is to perform a pull test on your pasture plants. If they are easily uprooted by pulling, then they are probably too fragile for grazing. If grazed too soon, then the resulting bare patches are more susceptible to pugging in the event of spring rains.

Watching the water on your landscape during a long, wet spring offers insights into inherent soil and topographic variability, as well as management challenges and opportunities. Wet pastures and fields are also extremely susceptible to damage from compaction due to animals and machinery, as well as reduced pasture productivity from pugging. Appropriate timing of spring cultivation and grazing due to wet conditions, however, is essential to preserving long-term soil productivity and preventing the necessity of costly remediation efforts.