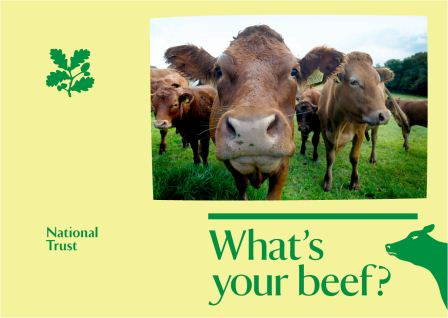 Food security and climate change are two of the most pressing global issues for people and the environment. Livestock production is considered a net greenhouse gas emitter, since the potent greenhouse gas, methane, is produced from ruminant digestion. Animal science studies have found reduced methane emissions with grain-based diets. Combined with the reduced land requirement of feedlot-type systems, this has led to the commonly-held suggestion that intensive cattle production systems, such as feedlots, are better than grass-based production in reducing agricultural carbon footprint and improving food security.

A new modeling study released last month in the report, What’s Your Beef?, found evidence to support the environmental benefits of traditional grass-based beef production and finishing. The National Trust, a conservation non-profit in the United Kingdom, determined that grass-based beef production actually had reduced greenhouse gas emissions when the carbon sequestration and storage of grassland pasture was considered. Furthermore, as grass-fed pastures are often not suitable to intensive crop production, grass farmers make use of marginal land to actually increase food security.

These findings contribute to the list of other established benefits of grass-fed beef production, including the increased biodiversity of pasture ecosystems and improved quality of run-off water from well-managed pastures. The report also touts the scientific evidence of the health benefits of grass-finished beef. Studies have found that meat from grass-finished cattle has up to a third less saturated fats than grain-fed beef and is higher in beneficial fatty acids, such as omega-3. For small farmers wanting to integrate environmental and economic sustainable management strategies and consumers demanding local and healthy pasture-raised meat, these findings support the intuitive environmental benefits of grass-based livestock production.

According to the Intergovermental Panel on Climate Change Synthesis Report (2007), agriculture made up over 13% of total human greenhouse gas emissions in 2004. Nonetheless, agriculture has a unique capacity to mitigate climate change through soil carbon sequestration and improved nutrient and manure management. Small farmers, who have the flexibility to implement value-added management and the economic necessity to increase yields through soil quality improvement have the capacity to lead the way on this front.