Meat & Poultry Buying at Farmer's Market's: A survey of shoppers at four markets in Oregon 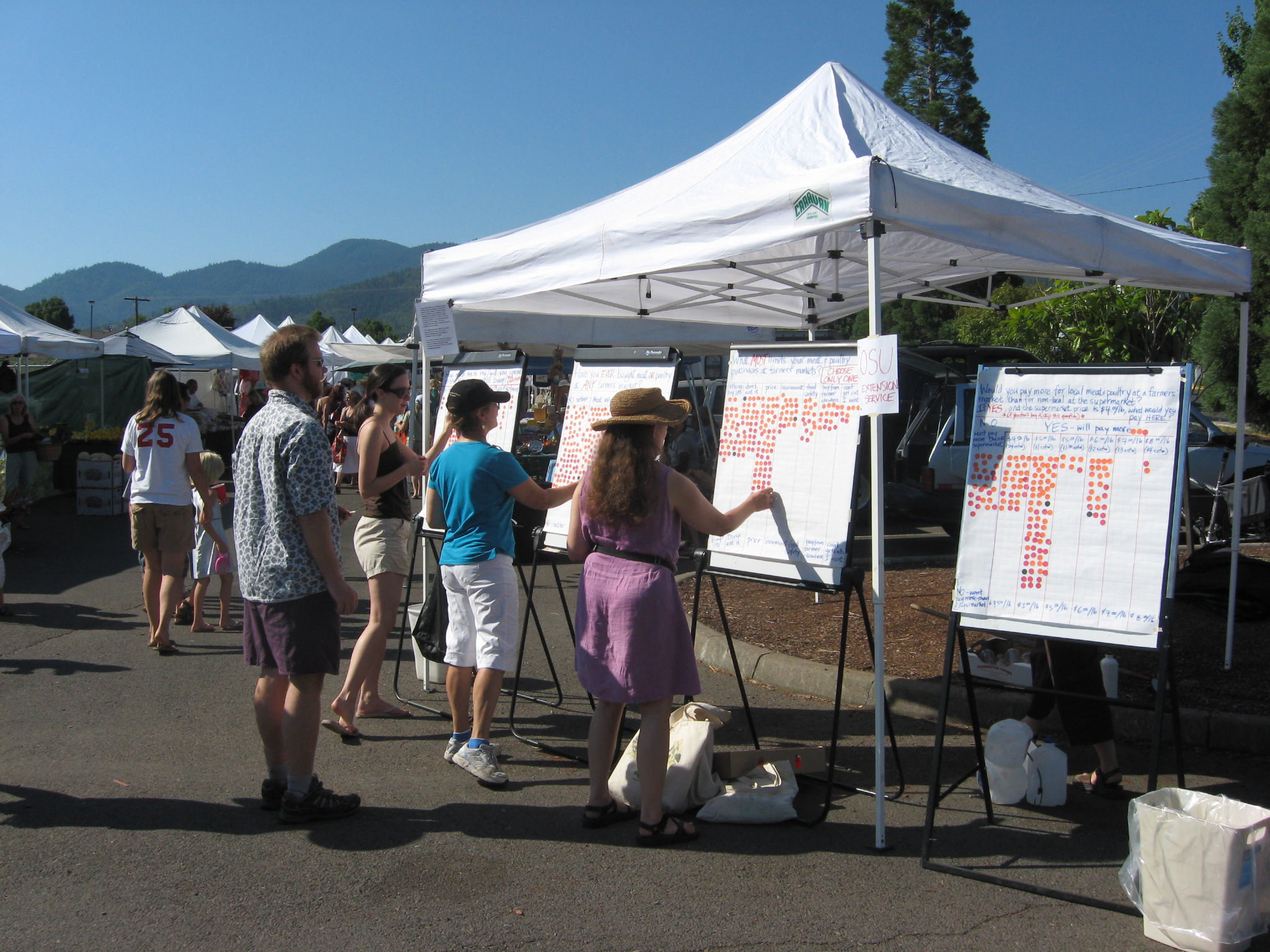 Farmers’ markets can be a valuable direct marketing channel: market shoppers are often willing to pay more than supermarket prices because they value the freshness of the food and the connection with producers. Vegetables, fruit, flowers, and value-added products such as baked goods, pickles, and jam dominate U. S. market sales. Meat and poultry vendors have expanded in recent years but typically represent a very small proportion of market sales (<10%). What can be done to encourage more meat and poultry sales at Oregon farmers’ markets?

We conducted “dot” surveys at four markets in Oregon, during July 2009, in Corvallis, Ashland, McMinnville, and Montavilla (Portland), to learn what percent of shoppers buy meat and poultry, why they don’t buy more, and how much extra they are willing to pay. More than 250 respondents participated at each market and more than 1600 overall.

Half of all participants had never purchased any meat or poultry at any farmers’ market. Approximately one quarter (24%) of the shoppers had purchased only meat, slightly fewer (22%) had purchased both, and very few (4%) had purchased only poultry. In contrast, nearly 100% of market shoppers have purchased fresh produce. Even these meat purchase levels are surprising: conversations with vendors and market observations would suggest lower percentages.

The three main reasons meat and poultry eaters don’t buy more (or any) at the farmers’ market were (1) price, (2) inconvenience, and (3) food safety concerns (Table 1). In previous Oregon research on purchase limitations at markets, price has never topped 10%: clearly meats are different. Farmers’ market prices are often substantially above supermarket prices for conventional or even “niche” meats. Said one shopper, “Free-range chicken is cheaper at the [local food] coop.”

Regarding inconvenience, shoppers felt unprepared to buy meat: “If you don’t think ahead and bring a cooler with ice, you can’t buy it here.” They were afraid to carry it around, unrefrigerated, for more than a short time: “It’s not that I think the product is unsafe…I think it’s going to spoil. What if I walk around with it on a 90 degree day?”

Concerns about food safety typically reflected unwillingness to buy meat and poultry at an open air market. Shoppers expressed skepticism about vendors’ refrigeration methods and temperature control, both at the market and en route. “Were they really careful bringing it here?” asked one. “How can they display it without having it go bad?”

It is encouraging that such a high percentage will pay some premium. However $1 or $2/lb extra may not be enough for vendors to cover costs and make even a minimal profit, given more costly production practices, small volumes, and supply chain challenges (e.g. distances to/cost of processing).

“Center of the plate”

The core meat and poultry buying group is loyal and enthusiastic, though relatively small so far. They also appear to purchase meat in smaller volumes than the average supermarket consumer. Said one,“Meat’s like a treat. We buy it from a local farmer if we buy it at all.”

• “Cowpool” Discounts: encourage shoppers to buy shares (half, quarter, eighth) of a live animal,  “on-thehoof,” and receive a discount from the individual cut price.

• Keeping it Cool: teach shoppers to plan ahead and bring a cooler or coldpacks, and/or make the  market their last stop before going home. Vendors could offer re-usable, insulated bags – with  farm logo – to attract and keep customers.

• Why It’s Safe: display information on the specific practices vendors use to keep meat and  poultry cold and safe.

• Meet Your Meat: plan a chef demo featuring the meat and poultry at that market, with vendors  describing their farms and production practices.

These strategies require resources, both human and financial, and it will take time for shoppers to change long ingrained buying habits and expectations.

Vendors, market managers and staff, market boards of directors, volunteers, and many others have worked hard to make farmers’ markets in Oregon as successful as they are. By building on those efforts, we can make meat and poultry more popular market fare.

For the full report, or if you have questions, email lauren.gwin@oregonstate.edu