Local Food Production and Sales Increase in the Rogue Valley 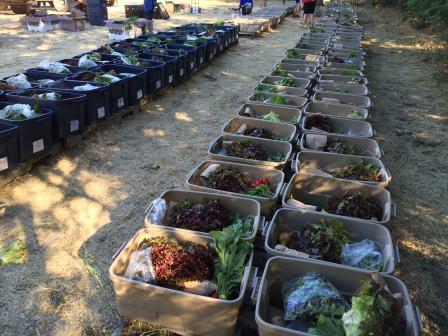 Rogue Valley farmers and producers grew and sold more food to local consumers in 2015 compared to 2013 according to an ongoing research study conducted by Southern Oregon University (SOU). Many farmers are selling directly to people they know and using the internet to sell products in addition to using many other enterprises.

The Rogue Valley Grower Economic Assessment of 2015, conducted by Southern Oregon University (SOU) assistant professor Dr.Vincent Smith and his student Aaron Anderson, studied the economic impact of agriculture, which includes food grown, produced, and consumed in Jackson and Josephine Counties. It follows a similar assessment conducted for the 2013 growing season.

The data was collected from identified farmers and ranchers in Jackson and Josephine County via survey in early January of 2016. In total, there were 481 respondents, 52% of whom were correctly identified themselves as farmers, and 226 individuals provided complete economic assessment of their agricultural enterprises. The total sample represents 9.66% of individuals reporting sales during the USDA 2012 Census of Agriculture.

Other key findings include:

● Many farmers reported growing on far less land than total land owned, even after considering fallow land in crop production.

● 72% of respondents who shared complete economic information sold 100% of their products in the Rogue Valley, with average sales of $34,700 annually.

● Rogue Valley producers grew and sold to local consumers 3.9% to 11% of the total food needs of the Rogue Valley.

An interest in measuring the success of programs to strengthen the Rogue Valley food system led to the creation of these survey efforts. The USDA Agricultural Census Data, collected every five years, provides detailed production information, but does not specifically address the extent to which food produced is marketed and/or sold locally or regionally. No other relevant data existed from available sources.

While this economic assessment study used several reliable survey projection tools, the small number of respondents in 2015 means the results should only be considered a rough estimation. The results of comparing the two growing seasons should also be considered limited in its ability to detect trends. The study could become a robust tool to reliably track significant changes in the economic impact of agriculture in the Rogue Valley if assessments are conducted every two years and the number of participants increases.

The Rogue Valley Food System Network is a group of individuals, organizations, and businesses who have joined together to strengthen the local and regional food system of the Rogue Valley through cross-sector collaboration.