(This is an excerpt from a more in-depth NMPAN case study, which can be found at the following NMPAN webpage: http://articles.extension.orgpages/74355/lpca-plant:-odessa-wa). 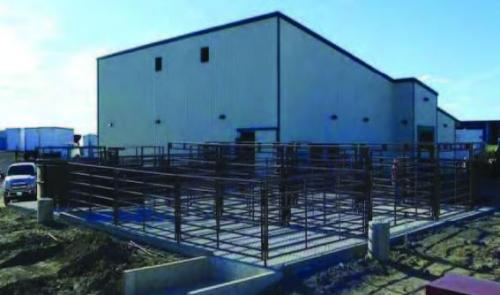 The Livestock Producers Cooperative Association (LPCA) is a USDAinspected multi-species meat processing plant in Odessa, Washington, located near the center of the state. It was formed primarily by cattle producers involved in the Cattle Producers of Washington (CPoW) but also processes sheep, goats, pigs, and bison as well. They conduct both slaughter and fabrication services.

The plant opened in 2013, closed temporarily in 2015, and is back in operation as of this writing but still faces big challenges to profitability and long-term viability. The plant is operated as a member-owned cooperative (LPCA), but it is no longer selling new memberships. Although they will stick with their business model, they have not found the cooperative model to be entirely functional. LPCA doesn’t have great buy-in from the majority of members, just a select few. There has not been a strong understanding of cooperative principles by the members, many of which are used to operating as independent ranchers.

The LPCA plant build-out financing came from a mixture of sources, including a Community Economic Revitalization Board (CERB) loan, cooperative owner dues (just 2% of the total), private loans (many from some co-op members, all with interest), lines of credit for equipment and operating expenses, and they still had about a 2% funding gap going into their first winter of operations. This was a very different picture from where they thought they would be starting out during their business-planning phase.

The LPCA plant needs more committed producers and more consistent throughput to become financial sustainable. The plant is only at one-third to one-half of capacity. They planned for the volumes that producers said they thought they would bring. It turns out they are not bringing anywhere near the number of animals. Additionally, the plant should have been a bit larger to incorporate the value-added processing pieces such as smoking. It has also been challenging to incorporate small animals on a regular basis, because slaughter fees don’t adequately cover the labor costs. This means they are mostly a beef plant.

As for the mix of farmers, LPCA doesn’t want a small number of very large customers nor do they want a ton of very small customers. They need a better mix. Right now, they mainly have one large customer and lots of very small ones. They would like some more mid-scale producers to balance this out and make the plant more resilient. This is often a problem for plants all over the country: the lack of mid-scale producers.

To read more about the history, funding sources, business planning, plant design and other aspects of the LPCA plant, please visit this webpage: http://articles.extension.org/pages/74355/lpca-plant:-odessa-wa