Japanese Beetle: A Pest to Watch for in Oregon

Japanese beetle (Popillia japonica) is an insect exotic to the US, which has previously established throughout parts of the East Coast, Midwest and South. Although small numbers of beetles have been trapped at the Portland International Airport arriving on air cargo flights since the year 2000, an established breeding population was found in 2016 and has resulted in regulatory action to eradicate the pest. 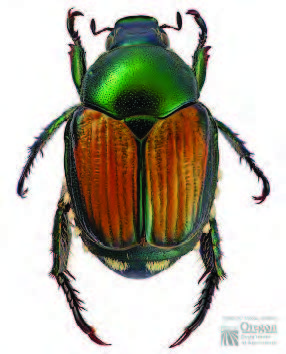 Japanese beetle is of concern due to their generalist feeding habits; the adults feed on more than 300 plant species including field crops, small fruits and tree fruits, vegetables and ornamentals. The larvae feed on the roots of grasses, causing damage to pastures and lawns. The potential exists for this pest to damage a wide range of crops important to small farmers.

The area of concern where the trap counts were high (369 found) is located in north-west Portland in Washington County. At this time it is not believed that Japanese beetle will be found in other areas of the state, however this time of year adults are present and this is an opportune time to be aware of this pest and look for its presence in areas outside of the north-west Portland infestation.

The adult Japanese beetle is distinctive in that it has a dark green, metallic head and tan metallic forewings with white tufts along the abdomen and rear of the pest. The insect is about 3/8” long and oval in shape. Larvae are “C” shaped and milky to translucent in color and found in the soil.

Since the beetle is new to Oregon, exact timing of the life cycle is not known. There is typically one generation per year with adults emerging from the soil in early summer. The adult female lays forty to sixty eggs, and after hatching, the grubs remain in the soil feeding on the roots of grasses until they pupate. They emerge as adults again the following summer. Adult Japanese beetle females prefer to lay their eggs in moist, warm soil high in organic matter.

Adult Japanese beetles cause damage by skeletonizing leaves between leaf veins and they also feed on softer plant material such as flower petals. Larvae feed on grass roots resulting in severe root pruning. The feeding limits the plant’s ability to survive in drought situations which can result in large patches of dead grass.

At this time, it is important to keep a watch for this pest since early detection is key to eradication and preventing establishment of this pest in the state. If you suspect you have found a Japanese beetle bring it to your local OSU Extension office for identification or report it to the Oregon Department of Agriculture by calling 1-866-INVADER or online at oregoninvasiveshotline.org.