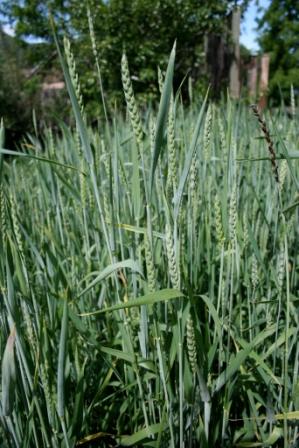 Amber waves of grain are rippling across a handful of small farms in Southern Oregon in what could be a resurgence in regional production. Last January, a group of bakers, brewers, chefs, millers and farmers met at OSU Extension in Central Point to collaborate on ways to meet consumer demand for locally-produced grain products.

Since Southwestern Oregon no longer produces much locally consumed grain, almost a generation of knowledge and infrastructure has been lost. Most farms in the region are smallholdings, and part of looking toward a future that includes grain in the local economy involves looking back at cultivation methods of the past, when equipment and practices were scaled for smaller farms. In order to teach producers about grains, Small Farms staff Maud Powell and Shelley Elkovich planned a series of seven classes entitled, “Growing Grains on a Small Farm.” The series, funded by a USDA Sustainable Agriculture Research and Education (SARE) grant, covers all aspects of grain production throughout the growing season.

Each class takes place on a farm in Southern Oregon and includes a tour of the grain operation, as well as presentations by producers and university specialists. The first class focused on networking between producers and end-users, and also addressed the economics of small grain production, including material on enterprise budgets developed by OSU agricultural economic specialist Willie Riggs. Participants identified potential pitfalls to a local grain market; the biggest obstacles seem to be scale of operations in Southern Oregon and the prices that small producers need to charge for grain. Bakers and farmers brainstormed ideas for developing mutually beneficial relationships, such as including more expensive local grains in recipes blending several flour sources.

The second class covered field preparation, varietal selection, and integrating grains into a whole farm system. Farm tours included the restaurant/farm Summer Jo’s, and Pacific Botanicals, both located in Grants Pass. Mark Wheeler of Pacific Botanicals illustrated how he incorporates grain into a double-cropping scheme, and also into a long-term location. Washington Sate University wheat specialist Stephen Jones combined the best of old knowledge and new advances, discussing varietal selection for disease resistance and for protein levels. Jones urged producers to use old resources, such as the USDA Bulletin Number 1074, Classification of American Wheat. This bulletin, now available online, lists the forty one varietals that were in production on about one million acres in Oregon at that time. Producers took home organic Glenn hard spring wheat seed to experiment with a small planting.

In April the course included planting spring grains and integrating animals to boost soil fertility and protein levels in wheat. Farm tours in Williams included L&R Family Farm and Seven Seeds Farm. Don Tipping of Seven Seeds explained how he uses rotational grazing of poultry and sheep to clean his fields of spent grain and to boost nutrients with animal manure.

The fourth class held in June focused in on how the wet, cold spring has delayed grain harvest, but participants observed a refurbished All- Crop combine in action at Dunbar Farms. David Mostue from Dunbar addressed economies of scale and details of his wheat trialing project. Bob Niedermeyer from Niedermeyer Farms talked about considerations for harvest and storage.

In August the focus will be on alternative poultry rations, as well as homesteading grain production. Producers will tour the homesteading operation at Mellonia Farm in Applegate, as well as the poultry feed experiments at Barking Moon Farm, also in Applegate. Josh Cohen at Barking Moon is performing informal wheat trials of five varietals, and the class will inspect those plots.

The sixth class will highlight equipment used in small-scale grain production and explore producers’ equipment-sharing cooperatives. OSU Cereals Specialist Mike Flowers will give an overview of necessary equipment, and the class will travel to Dunbar Farm in Medford to observe a threshing machine in the field.

In October, the final class in the series will tour the organic cover crop seed partnership between Seven Seeds Farm and Frye Family Farm. Pat Hayes, OSU barley specialist will present material on barley as food for humans and livestock, as well as the malted barley market in beer production.

This series has been very popular; Small Farms raised the fifteen participant maximum to thirty to accommodate producer requests. Small Farms agent Maud Powell and her assistant Shelley Elkovich plan to write more grants encouraging grain production, such as a DVD project which will incorporate information on small-scale grain production with case studies of different farms producing grains in Oregon, and an initiative to develop appropriately scaled equipment that would be produced in the U.S. They also plan to collaborate with Washington State University on a multi-state wheat trialing project.