Growing Quinoa in the Willamette Valley

Quinoa (Chenopodium quinoa) is a broadleaved annual species belonging to the Amaranthaceae, the same family to which economically important crops such as spinach (Spinacia oleracea), beets, sugar beet and chard (Beta vulgaris) belong, in addition to prominent weeds such as pigweed (Amaranthus spp.).

Quinoa is a native to a wide area of the western part of South America, ranging from northern Colombia, near the equator, to central Chile. This spans from 2°N to 40°S of latitude and within hich is topped with an often profusely branched inflorescence composed of tiny (0.15”) flowers. The range over which it naturally occurs is an indication of the adaptability of quinoa: it can grow where rainfall is as little as 3” per year or as much as 75” per year. It will grow in marginal soils, tolerating pH ranging from 4.8 to 9.5, as well as being uncommonly tolerant of soil salinity. It has also shown a tolerance for hard frosts during both vegetative growth and flowering.

Besides the ability to grow under conditions that would be problematic for other crops, quinoa is also a very nutritious food. The rounded seeds have a natural balance between oils, protein and carbohydrates. The protein content ranges as high as 16% and this is a very complete protein that contains all the essential amino acids. Because of its high starch content, quinoa can be prepared for flour production in the same way as cereals. Compared to grains such as couscous (ground hard wheat), white rice, and barley, quinoa provides similar levels of dietary fibers and superior levels of vitamins and minerals as well as natural anti-oxidants. However, unlike wheat, barley, or rye, quinoa does not contain gluten.

Despite all of these advantages, quinoa has remained a minor crop worldwide. The Food and Agriculture Organization of the United Nations (FAO) estimated that in 2011 quinoa was grown on about 250,000 acres worldwide. Much of this is in South America, primarily Bolivia and Peru (which produce 80% of the world crop), but also in China, Europe, Africa and India. In North America, efforts to develop strains of quinoa adapted to cultivation began in Colorado and Nevada in the 1980’s. As of 2009, the U.S. produced approximately 6% of the world supply. More recently, the USDA National Institute of Food and Agriculture awarded Washington State University, Brigham Young University, Utah State University and Oregon State University a 4-year grant in 2012 to study cultivar development and agroecology techniques for organic production. The OSU effort is overseen by Stephen Machado at the Columbia Basin Agricultural Research Station in Pendleton.

Interest in the crop has also led to small scale production in western Oregon. Marion-Polk Food Share (MPFS) the regional food bank serving Marion and Polk counties, is entering into its third season of quinoa production in the Willamette Valley. MPFS starting growing quinoa to provide a local supply for their “Better Burger,” a veggie burger developed and produced by MPFS. Protein-rich foods are hard to come by in food banks, and this product serves as a protein-rich, healthy supplement. MPFS leases and operates a 200 acre farm near Salem, owned by the Oregon Department of Corrections. For quinoa production, they contract with Iverson Family Farms to conduct field work. In 2012, MPFS started small garden-plot trials with quinoa. In June 2013, they planted 5 acres in an array of locations, with and without irrigation. Although the crop grew well, it was damaged by heavy rain just as it was ready for harvest.

For 2014, MPFS went to a larger scale and planted 9 acres of quinoa. The planting location was immediately south of Mill Creek Correctional facility on Turner Road south of Salem. The soil type in this field is predominantly Salem gravelly silt loam. Seed was purchased from Wild Garden Seed, a small seed company in Philomath, OR. Owner Frank Morton has been growing quinoa for over 30 years in the Pacific Northwest and has developed unique strains of the crop. Four of these seed strains were purchased: ‘Cherry Vanilla’, ‘Red Head’, ‘Brightest Brilliant Rainbow’ and ‘Oro d’ Valle’. Seed was planted on April 15th utilizing a John Deere 450 grain drill. All cultivars were seeded at approximately 7 lbs/acre and cut approximately 1:2 with Metarex® slug bait (Ag Nova Technologies).

Quinoa germinates readily, and even within the first week after planting on April 15th, seedlings could be observed. By the end of the first week of May, seedling emergence was evident throughout the planting. By the end of May, plants in general were 4-12” tall. Rapid growth ensued throughout June. Inflorescence development became apparent by the third week of June and the maximum height of the crop was reached near the end of the month. On June 13th, the planting received an overhead application of 15 gal of 20-0-0 and 1 gal of Structure®, (Actagro®, LLC) which is 7-21-0. Average height was 46” by July 18th.

Although observations in 2013 indicated that irrigation typically increases plant size and yield, in 2014 this crop received no supplemental irrigation. Conditions from June through the end of August featured above normal temperatures and abnormally dry conditions. Fortunately, as the soil appeared to be drying out, timely rains provided adequate rainfall to water the crop. If dry spells had lasted longer, irrigation would have been applied.

Weed emergence began simultaneously with the quinoa, as herbicides were not applied to the field. A number of different weeds were common in the planting, the most important of which as a competitor for the developing crop was Mayweed Chamomile (Anthemis cotula), which developed into dense stands up to 2’ tall, particularly in the northwestern corner of the planting, and evidently suppressed growth of the quinoa in that area. Other weeds were either too diminutive or sporadic in occurrence to have a similar effect. Other weeds species present included Queen Anne’s Lace (Daucus carota), Shepherd’s Purse (Capsella bursa-pastoris), Smartweed (Polygonum sp.), Spiny Sow Thistle (Sonchus asper) and Field Bindweed (Convolvulus arvensis).

The largest problem with this crop became evident in mid-May, when yellow and pink blotches developed on foliage throughout the planting. Samples of the affected foliage were sent to the OSU Plant Clinic for diagnosis. The spots turned out to be a symptom of downy mildew, caused by Peronospora sp. The species P. variabilis has been identified from Pennsylvania in 2012 as a cause of downy mildew on quinoa and worldwide seems to be the most serious disease problem, resulting, in some cases, in total crop loss. The spots continued to appear on foliage throughout May and into June, but as the weather became warmer and remained dry, incidence of infection decreased. As the plants continued to grow, the newer foliage did not exhibit signs of infection.

The developing crop was sampled for insects on June 30th and July 18th. The principal insect species present on June 30thwas Western Spotted Cucumber Beetle (Diabrotica undecimpunctata ssp. undecimpunctata), which was present in considerable numbers (i.e. 20-50 adults per sweep set). Also present were thrips and some aphids (species not identified). Monitoring on July 18th detected similar numbers of Cucumber Beetles as well as significant numbers of nymphal seed bugs. Insect populations in general appeared to decline following this and by harvest there were no noticeable insect pest issues. This was a welcome development as Lygus bugs can cause yield loss by feeding on developing seeds late in the season. 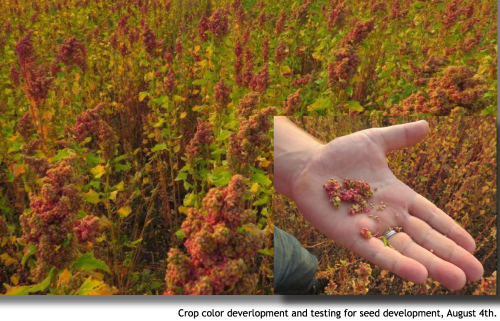 The entire planting was harvested by combine on August 27th. Crop weight directly off the field was 8,464 lbs. MPFS used a 9600 combine with a John Deere 222 header. Clover bars were used in the combine. 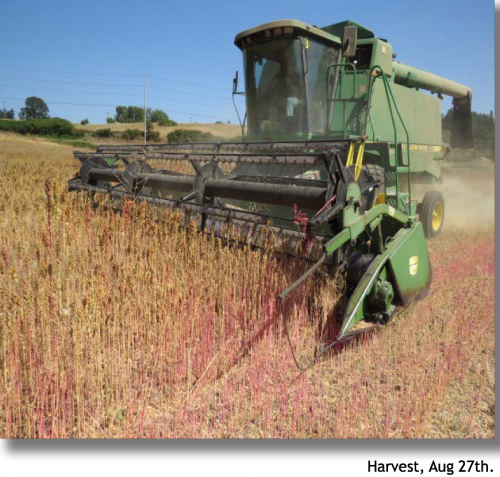 Processing quinoa involves multiple stages, including drying (if harvested damp), cleaning and some combination of scarifying/de-hulling, polishing or rinsing. The last two steps are to remove the bitter saponin coating on the seed. Seed cleaning was done by a local seed processor, K/S Seeds, located in Silverton, Oregon. This process reduced the seed weight by almost half. Polishing was done by Willamette Valley Quinoa, a new, small business in the Salem-Keizer area. At the end of processing, MPFS yielded over 4,000 lbs. of quinoa in 2014, and will be using that product in burgers this year.

For 2015, 20 acres are planned. Aside from growing quinoa for internal use, the project itself has sparked much interest in the broader agricultural community. Farmers, processors and distributors have all expressed interest in the potential of a quinoa cash crop in the Willamette Valley.