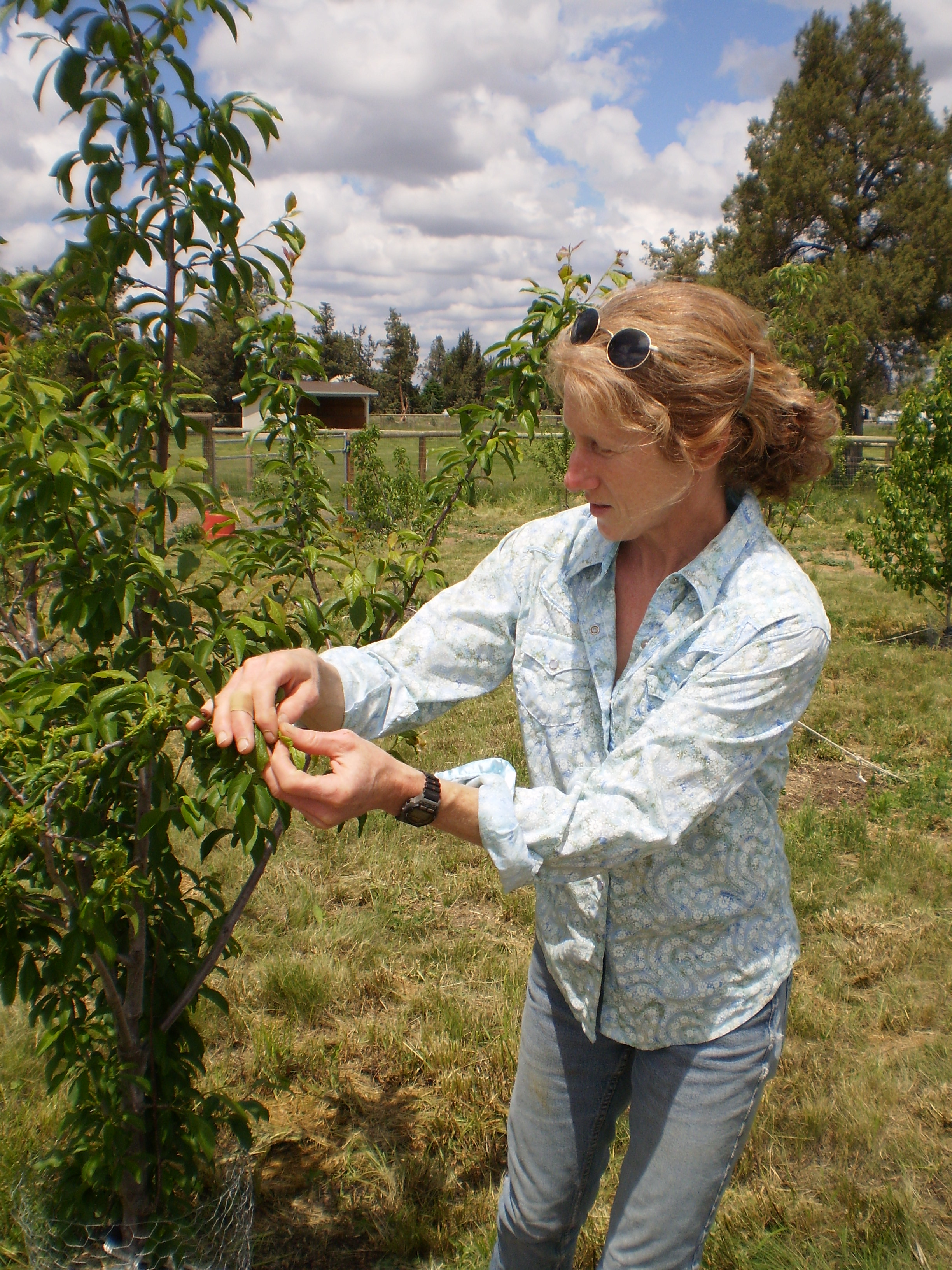 Windflower Farm is the accumulation of everything Gigi Meyer loves. From her barn deck, which she hopes will someday serve as an art and writing studio, she oversees horses grazing the lush pasture below. In the opposite direction the view changes to artistically designed vegetable and flower beds. Two greenhouses, an orchard and an old barn converted into a chicken coop serve as a backdrop to this beautiful scene.

Gigi seldom has time to enjoy the vision she has created on her 10-acre farm located about 15 miles east of Bend. She is much too busy planting seeds, pulling weeds, and harvesting crops to fulfill her 30 member CSA (Community Supported Agriculture) operation. Still, she is excited about living her dream, which combines all her passions.

“I have found a way to bring art, writing, horses and gardening, all the things I love, into one place,” says Gigi. “After all my wandering, it feels good to be settled in Central Oregon and have this farm as my home.”

Gigi’s life journey has taken her places throughout the world. Growing up in Portland, she was first exposed to Eastern Oregon when her family purchased a large cattle ranch in Westfall. Summertime and vacations were spent on the ranch where she learned to ride horses and work cattle with the buckaroos. This was the perfect setting for a horse crazy 10- year-old and these experiences eventually lead Gigi to jobs of training and conditioning race horses and teaching riding lessons.

After graduating from high school, Gigi headed east to attend college and pursue her love of art. But even after 10 years of painting in New York, Gigi’s form would usually reflect the deeply entrenched influence of Eastern Oregon. “In the process of abstraction, an image of the Oregon desert was present,” she says.

In March, 1989, Gigi had the opportunity to travel to Italy to write a feature article on the Palio Horse Race. While there, she worked as a caretaker for a villa in Tuscany and discovered her passion for farming.

“It was a diverse villa with a beautiful rose garden, vineyard and lavender field. Different vegetables and flowers were growing and I learned a lot from my friend who was a horticulturist. It was a magical time,” says Gigi.

After several months in Europe, Gigi returned to the United States a changed person. Realizing her need to be close to nature, she returned to the West Coast and eventually ended up in Bend.

In the fall of 2005, she was able to sell her house in town and purchase a farm in the rural Alfalfa community east of Bend. “The timing was right because Alfalfa was still off the map so I was able to buy the farm for less than the house I sold,” says Gigi, noting that her new property was set up with a house, old barn and an inefficient irrigation system. 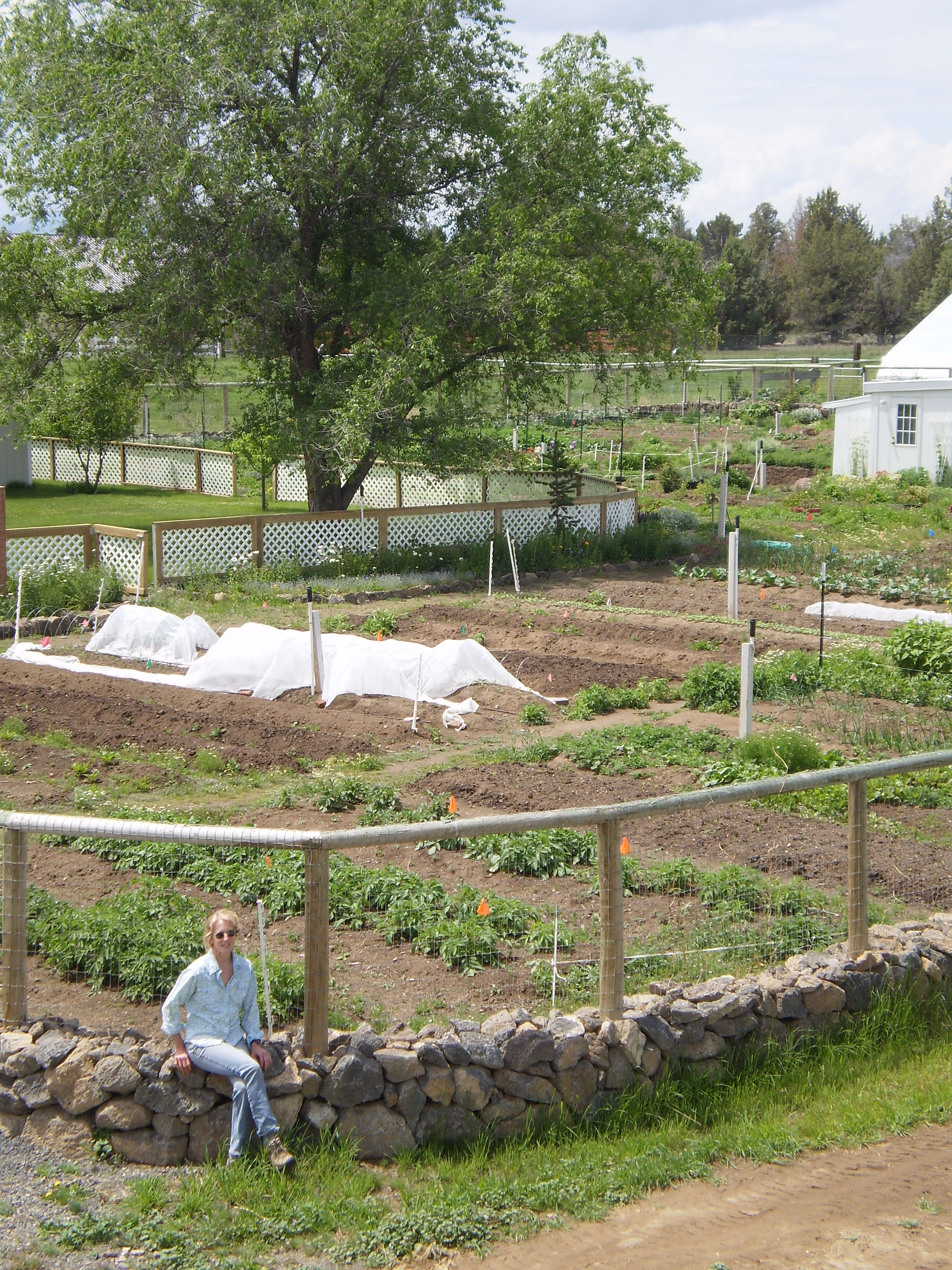 “The first thing I did was improve the fences and irrigation system. Otherwise, I knew all I would be doing is moving hand lines,” she adds.

Utilizing her talent as an artist, Gigi then designed the layout for her farm. She figured out where she wanted fence lines for the horse pastures and the placement of new greenhouses and horse barn. She planned the location for her garden and decided where the orchard should be planted.

With help from her family, Gigi then went to work digging up rocks and creating rock walls around the garden area. She enhanced her soil and started planting currant bushes to help serve as a windbreak for other crops.

Two greenhouses were constructed to give her an early growing advantage in the cold Central Oregon climate and the old barn was remodeled to accommodate 30 laying hens. Gig also built a 7 stall barn and has plans to board horses to help create more revenue for her farm.

In 2007, Gigi was ready to offer 5 CSA memberships. The number grew to 15 in 2008 and this year, Windflower Farm has 30 CSA members and there is a waiting list. For a fee of $625, a weekly bag of produce is dropped off for pickup in downtown Bend and for slightly more, home delivery is provided. For an additional $100, members can add fresh cut flowers and for $65 more, members can have eggs with their order.

Gigi’s CSA season runs six months, May through October, and starts a month earlier than most other programs in Central Oregon due to her greenhouse advantage. A wide variety of produce is offered, ranging from different types of lettuces early on to tomatoes, peppers, cucumbers and herbs later in the season. She has established a market with a local grocery store that will accept extra produce and she is talking to a local caterer who is interested in using locally grown vegetables in his business.

As interest in local food grows, Gigi enjoys sharing what she has learned with others. She consults with people who are trying to establish gardens and has attracted volunteers who are eager to help out on the farm.

“I am learning as I go and have had some hard lessons along the way,” says Gigi. “Farm work is physically and mentally tiring and there are always worries about money. I feel that it’s important to have some balance in life so hopefully, I will reach a point when that happens.”

For now, Gigi is exploring all opportunities to increase income on her farm. She voices frustration with the laws and policies that make it difficult for small farmers to financially survive.

“It would help if there was some flexibility in zoning requirements to allow for agri-tourism,” says Gigi. “This has become quite popular in Europe. Farmers rent out a room or spot on the farm for tourists who would like to spend a few days in the country and learn a bit about farming. This helps keep farmers on the farm and also helps city-folk get first-hand experiences of country life.” 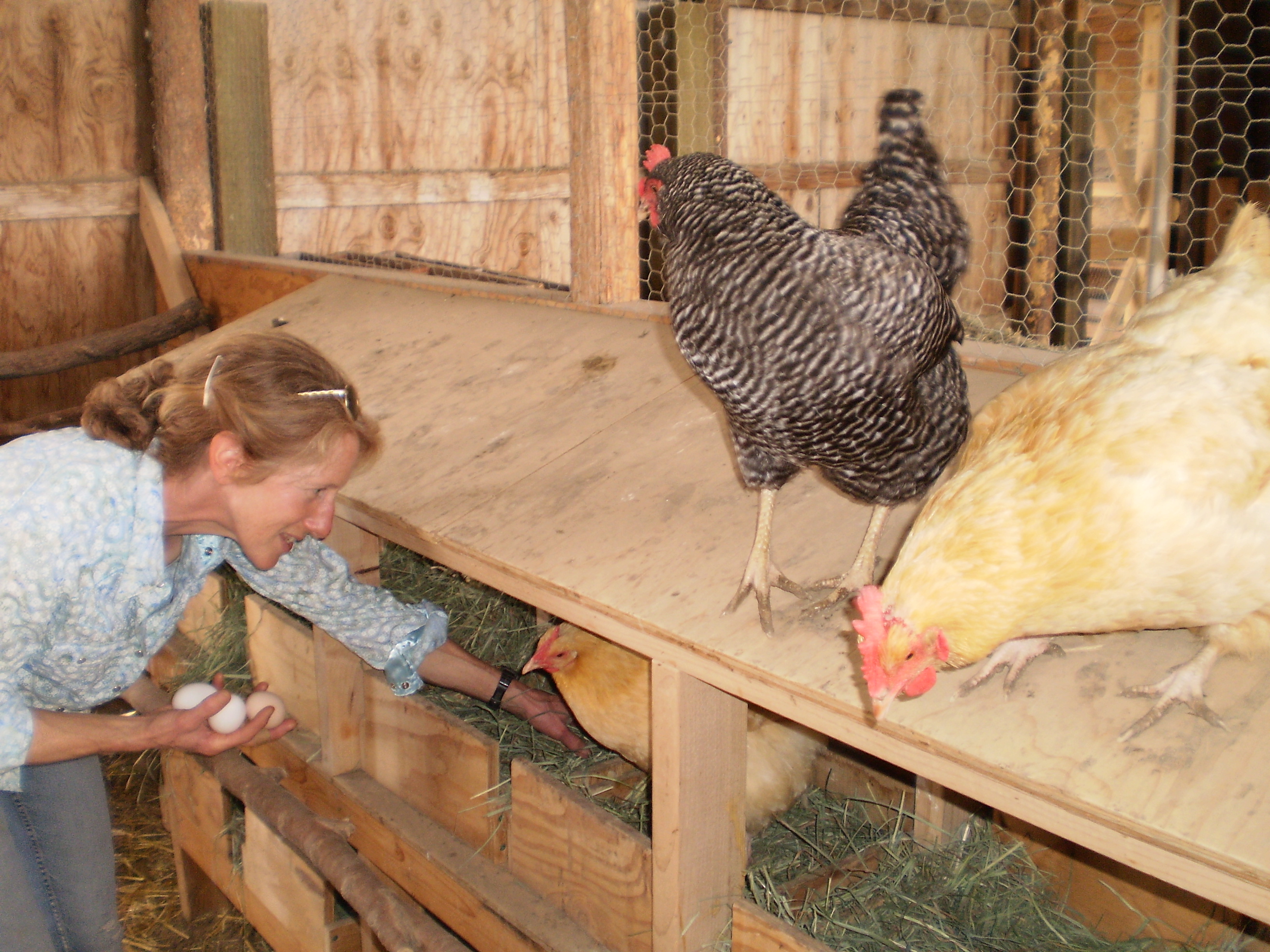 Despite the long hours and exhausting work, there is no place Gigi would rather be than Windflower Farm. “Growing healthy food is very satisfying and I’m motivated by the enthusiasm people have for the farm and what we are growing,” says Gigi. “It’s wonderful that people are becoming more aware of what they eat and how everything we do affects the environment. I really want this to work because food is so important to everyone.”