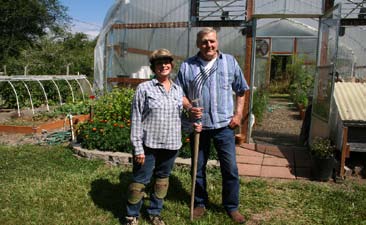 The small farm of John and Sally Reill sits in a valley located in Lincoln County, Oregon, about 7 miles east of the Pacific Ocean. Though the property is 4 acres, the deer fenced growing area is not more than a ½ acre. Over the course of 18 years they have built an intensive growing area currently consisting of 27 raised beds about 40” wide by 14’ to 21’ long, mostly made of salvaged 2” X 12” redwood planks. In 2001 they built a 20’ X 30’ double poly wall greenhouse. There is a large area for growing squash, berry patches and a half dozen apple trees.

Sally has been gardening for 40 years and is a 20 year veteran Master Gardener, active in the local chapter. Her interest in growing food crops goes back to childhood. Her father had a large garden to which he carted chicken manure from the chicken ranch across the road. John also came by his  interest in growing vegetables early. He remembers growing a small garden as a child and visits to a family farm, as a teenager he worked on a small farm. A mutual interest in gardening brought them together.

After John retired from the Oregon State Parks Department he was looking for something to keep busy and supplement the retirement income. He had recently learned the art of welding and was making garden trellises and steel garden art, which he wanted to try selling at the Saturday Farmer’s Market in Newport. Sally decided to grow a few extra vegetables and take them along. They started in 2002; the locally produced vegetables sold quickly and were usually gone by 10:00 in the morning. They also sold cut flower bouquets. It was there that they met the proprietor and chef of a trendy, and very popular, Italian Restaurant in Newport, “April’s at Nye Beach”. At first Chef April bought whatever was available that she could use, including flowers, stressing locally grown and fresh ingredients on her menu. Soon she was ordering vegetables during the week and picking them up on Saturday morning at the market. The following year she was asking if special crops could be grown for her. After 4 years of taking everything they could produce to market, they could no longer produce enough to continue at the Market and satisfy the needs of the restaurant. In 2005 they decided to grow exclusively for one customer, and continue growing garlic for two other customers as well. 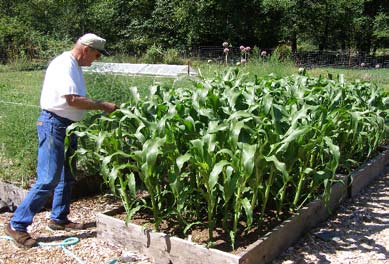 John does much of the heavy work, building new beds and filling them with trucked in topsoil, and composted livestock manure from the Lincoln County Fairgrounds. Bone meal, rock phosphate and seed meals are added. The farm is about 95% organic, much of the fertilizer coming from their small flock of chickens. He also designs the cloches and builds steel supports for things like cucumbers and beans. Tomato cages are made of circles cut from high tensile 6’ field fence, which holds up well to the weight of the plants. Cages are staked in place with 6’ steel fence posts. Sally starts all the seeds in the greenhouse and plans what and when to plant, estimating when space will be available to transplant the seedlings. Seeds are started in pots in commercial mix on a heat mat or a sand box with a soil heat cable, and then moved to a bed in the greenhouse for growing and finally to a cloche or cold frame for hardening off. All crops including those normally considered as direct seeded, such as beets, are started in pots and transplanted allowing for more uniform spacing and doing away with the need to thin. Sally also grows around 100 tomato plants, as well as many other vegetables and ornamentals, for the annual Master Gardener Spring Plant Sale.

Irrigation is by hand watering. Crops are continually being harvested, rotated and replanted so drip systems are not practical and sediment in the stream water used could clog emitters. Overhead watering would promote disease too in the cool climate. One big benefit of hand watering is that all the plants get a good visual check at least once a week for developing problems.

The biggest challenges in the maritime climate are pests and diseases which favor the frequently damp weather. Pests such as slugs and flea beetles can ruin a crop quickly which makes timing of plantings important since there is sometimes no good way to control them without ruining the crop. Fungal diseases are a problem, particularly for tomatoes and squash; organic preventative sprays are a must. 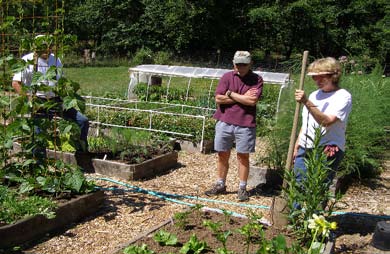 The crops grown are very diverse; arugula, endive frisee, chives, kale and escarole start the season. Coming later are beets, fennel, onions, parsley, chard, squash and Italian green beans. More tender items such as a variety of tomatoes, basil and English cucumbers are grown in the greenhouse and three cloches. Garlic is a big crop, around 800 bulbs a year take up 3 or 4 beds. Once the garlic is harvested in July, succession plantings of seasonal vegetables are made to keep a constant supply coming. The restaurant also uses apples for special deserts.

Sally makes flowers into miniature bouquets for each table and large bouquets for the reception and window areas. The varieties proven most useful are Zinnias, Sunflowers, Rudbeckias and other perennials. Bouquet fillers include such things as garlic scapes, dill seed heads and herbs, making them interesting and unique.

The vegetables are picked and delivered once or twice a week depending on season and demand, and to ensure freshness. The Reills stress very high quality in their produce. This arrangement has worked out well for both the farmers and the restaurant. The restaurant can serve fresh in season food and the farmers are not tied down to a weekly Market. 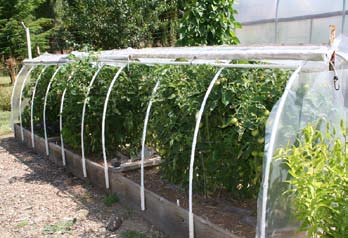 Sally offers this advice for farmers who have a limited space: Producing a large quantity of quality vegetables in a small space requires intensive gardening practices and rapid turnover of crops with attention to timing, soil fertility and prevention of problems. For those who would like to grow for restaurants she advises that once initial contact is made, get to know the chef, find out what types of vegetables suit the cuisine being served, search out the best varieties, buy good seeds, ask what size vegetables are preferred and concentrate on what you can grow successfully. Finally always offer only the best quality, if produce doesn’t look good, it is chicken food on the Reill Farm.