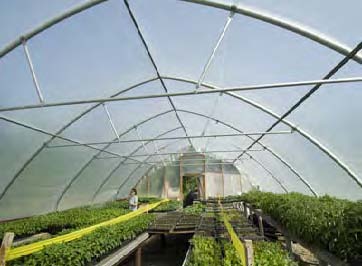 As the cost of agricultural lands in Oregon has skyrocketed in the past decade, land acquisition has become out of reach for many young farmers. Increasingly, young farmers are looking to family members or community partnerships to help secure agricultural property. Blue Fox Farm is a great example of this emerging family agricultural partnership. The farm is a collaboration of several family members: Dick and Bobby Kuegler, who helped purchase the property in 2003, and their two daughters, Melanie and Valerie, along with their husbands, Chris Jagger and David Kennedy. The two daughters and their families live on the farm, while their parents live in nearby Jacksonville. This partnership provides one example of the revitalization of family farms in Oregon and collaboration between generations.

Melanie and her husband Chris Jagger operate the produce component of Blue Fox Farm, while Valerie and David run the animal husbandry program. Chris and Melanie grow six acres of vegetables, using succession planting, greenhouses for season extension, and a comprehensive soil fertility program that includes cover cropping, green manures and crop rotation. Chris and Melanie have worked tirelessly since 2003 to steward the extended family property and to establish a successful farm business. They have developed working relationships with a number of local chefs and retailers, delivering consistent, high quality produce 45 weeks out of the year. They also have a strong presence at the Ashland and Grants Pass growers markets, and run a small Community Supported Agriculture Program. Valerie and David raise Icelandic sheep, Oberhasli dairy goats and ducks. Animal waste is composted and used to increase soil fertility throughout the property.

After the birth of their first child, Demian, last September, Chris and Melanie designed a new Community Supported Agriculture (CSA) model that they believe will work better for their family. Instead of selling CSA shares, they are offering “Blue Fox Bucks” (BFB) to their customers. Customers can buy BFBs at the beginning of the season, thus providing Chris and Melanie the capital needed to purchase seeds and soil amendments, and then use them at the Blue Fox Farm market stands throughout the season. The new system will save Chris and Melanie the time and labor needed to pack individual CSA boxes and give their customers more choice. Concerns about cash flow, customer satisfaction and balancing farm and family resulted in the creation of a new form of direct marketing. This type of innovative and dynamic marketing is necessary for the success of small farms today. 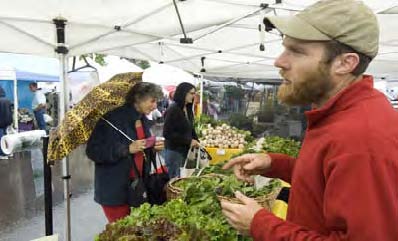 Chris and Melanie’s interest in sustainable agriculture extends beyond commercial production into the realm of university-based research. Blue Fox represented one of eleven organic farms that participated in OSU’s OSPUD program. They found out about OSPUD at the Brietenbush Farmer-to-Farmer gathering three years ago, where they met some of the OSU faculty involved with the program and some of the other participating farmers. OSPUD, funded by a Western SARE grant, was a participatory research project that linked growers with OSU faculty in an effort to improve potato production methods. Chris and Melanie had grown potatoes for years, but felt they could still learn a great deal about potato production. They were also curious about what it would be like to work with a university and whether or not they would actually benefit from working with OSU.

The couple was pleased with the management and operation of OSPUD. During an initial project meeting, the participants identified three areas of potato production to focus on: nutrient management, insect pest control (specifically wireworm and flea beetles) and disease control (late blight). The group met periodically over a two year period, during which time OSU faculty conducted research on each of the farms.

In terms of nutrient management, the OSPUD team explored the premise that it is unnecessary and therefore wasteful to add nitrogen to potato plants every year. Indeed, potatoes plants that received no additional nitrogen during the project yielded about the same as the plants that did.

The group meetings were informative, and also fun. “We sampled lots of different potato varieties,” explained Chris. “So many, in fact, that they all started to taste the same, except to the real potato connoisseurs.” Chris described OSU faculty members as “our peers, rather than academics who were trying force information down our throats.” The 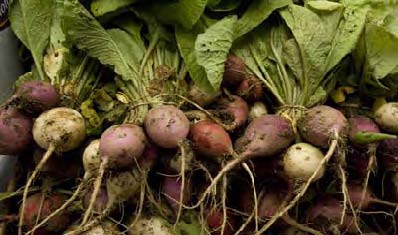 couple also enjoyed networking and sharing information with the other producers involved with OSPUD. While the number of small farms is increasing in the Rogue Valley every year, there are limited opportunities for experienced producers to work on collaborative research projects.

Chris and Melanie see the value in deepening their understanding of crop production through both university-based research and information sharing between farmers. Their interest in crop improvement is yet another reason why Blue Fox Farm has been so successful. To learn more about the farm, you can read Chris’s blog.

Blue Fox Farm will be featured with other farms in the upcoming issue of Oregon Agricultural Progress Magazine.