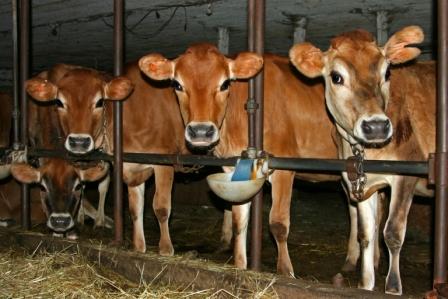 and best performance in the next lactation, lactating animals should have an opportunity to rest and regenerate mammary tissue between lactations. High producers also need a dry (non-lactating) period to recoup body condition in preparation for the next birthing and lactation. This article will describe drying-off best practices that are scientifically based. Experienced livestock producers often successfully use methods that depart greatly from the practices described here. Regardless, best practices are best practices for a reason and the consequences of improper dry off procedures can be serious and even fatal.

Beef cattle, meat goats, sheep and horses generally wean their offspring naturally by about six months. At that time, the youngster has a mature digestive tract with all its proper microbes, is consuming the diet of a mature animal and is gaining weight well. The little nursing the animal does at that point is accompanied by teeth, so the dam is highly motivated to discourage nursing and wean the offspring. If necessary, young animals consuming a growing ration and gaining well can be separated from their mothers and weaned abruptly as described below. Weaning at about six months generally enables dams to regain the body condition needed to support the subsequent pregnancy and lactation.

Due to the amount of milk they produce, the drying-off process is often more complicated for dairy animals (cattle, goats and some sheep). Preparation for dry off should begin at least two weeks prior to the dry-off date with a significant change in the animal’s diet. Slowly reducing the energy content of the diet and feeding primarily a high-fiber diet will reduce the nutrients available for the animal to make milk; this is often all that is needed to reduce milk production to a level that makes dry off safe and simple. Eliminating grain and switching from alfalfa to grass hay is often effective. However, it may be difficult to cease production in high-producing animals, and these individuals may need to be fed a very low calorie diet such as straw and water. This diet should not need to be fed longer than two weeks, after which animals can gradually be changed over to a traditional balanced maintenance or gestation diet.

Do Not Limit Feed or Water

Some dry-off protocols recommend limiting the feed of animals being dried off. Experienced livestock managers know that hungry animals often manifest undesirable behaviors such as chewing things they should not, going through fences in search of food, eating toxic plants and fighting over food. Full feedings of high fiber, low energy diets will keep animals physically full while reducing their nutrient intake. This approach will work on dairy animals and those nursing offspring to be weaned.

Although it is a frequent recommendation in some dry-off protocols, water should never be withheld during the dry-off process. Water is the most critical nutrient and providing a constant source of clean water is a basic aspect of animal welfare and husbandry. Reduce the amount of milk produced by decreasing the nutritional content of the diet as described above.

Abrupt Dry Off Is Best

After animals have been on a high fiber, low energy diet for about two weeks, their udder should be assessed for level of continued milk production and mammary health. If all seems well, abrupt dry off should be implemented. This means the animal is milked (by a human or its offspring) a final time, then not again until the next birth and lactation. Some livestock managers will milk once a day for a while, then every-other-day, then stop milking altogether, but this interferes with the major factor responsible for the cessation of milk production: back pressure. Whenever milk accumulates in the udder, it exerts pressure on the milk-producing cells in the mammary tissue, causing them to reduce milk production (this is why animals milked every 8 hours produce more milk than those milked every 12 hours—there is less back pressure on milk-producing cells). If the pressure persists, the cells will eventually cease milk production altogether, which is exactly the goal of the drying-off process. Dry off is generally non-problematic when cows are producing less than 20#/day and goats are producing less than 3#/day.

Mastitis Treatment and Monitoring In dairy cattle and any animal with a history of mastitis, it is a best practice to milk the animal completely out, carefully sanitize the teat end with alcohol, aseptically infuse all teats with a commercial dry cow antibiotic treatment and apply a commercial teat dip. The antibiotic treatment is left in the udder for residual treatment during the dry period, helping to clear up any lingering mastitis and helping to prevent new cases from getting established. Follow all label instructions regarding meat and milk withholding after treatment. Dry treatment is only labeled for use in cattle, so use in other species must follow the recommendations of a licensed veterinarian and abide by all other aspects of the FDA’s extra-label drug use guidelines (refer to “Small Ruminant Medications: How to Stay within the Law” in Oregon Small Farm News, vol. II No. 3, Fall 2007, pp. 7-9). Animals in the process of being dried off must be monitored closely for mastitis. Signs of mastitis can include heat, pain, redness and swelling of the affected gland; abnormal milk (clumps, blood, watery discharge, abnormal smell and/or gas); illness (fever, poor appetite, depression); and cold, bluish skin in the case of gangrenous mastitis. Contact your veterinarian if you suspect an animal has mastitis. A clean environment with excellent mud and manure management will help lower the incidence of mastitis contracted during the dry period.

Animals should be dry for 45 to 60 days. This is sufficient time to rest and regenerate mammary tissue. If animals have prolonged dry periods, they run the risk of becoming obese, experiencing obesity-related diseases and having difficulty birthing.

It is no surprise that proper management and planning are required for a safe and effective drying-off process. Transitioning animals to high fiber/low calorie diets, keeping a clean environment, drying off animals abruptly, using intramammary antibiotics and monitoring for mastitis are the best management practices associated with successful dry off. A well planned and disease-free dry period will lay the foundation for an even more productive lactation next time.