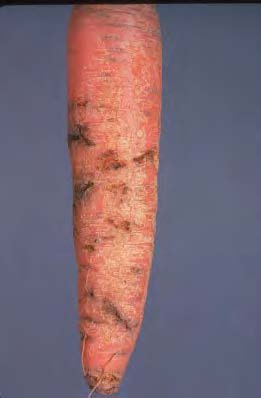 Carrot rust flies (Psila rosae) are well known to growers of carrots, parsnips, celeriac, celery and other umbelliferous crops. The adult females are attracted to the odor of the host plant, and lay their eggs at the crown of the plant. The adults don’t do any damage, but after the eggs hatch, larvae immediately burrow into the soil and start feeding on the roots. As the larvae grow, the amount of damage they cause increases. Recently planted crops can be killed resulting in stand thinning. After forming a tap root, more mature carrots, parsnips and celeriac suffer direct crop damage from the tunneling larvae (figure 1). The lower stems of celery are normally only damaged when populations are somewhat higher. The larval excrement or frass is rust colored, giving the flies their common middle name, and is deposited in the tunnels.

The activity of adult flies can be monitored with yellow ticky traps available from various suppliers including Great Lakes IPM (800-235-0285) and Gempler’s (800-382-8473). Three traps are normally placed at the edge of the field nearest the previous carrot or parsnip crop and near any shelter belts. Researchers in the UK have shown that trap counts are increased when traps are set at a 45º angle (figure 2). Commercial growers sometimes use the traps to schedule insecticide sprays, or to find the best time to remove row covers. 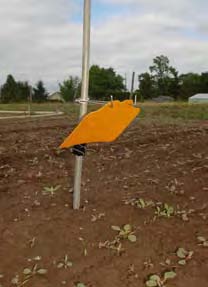 Thresholds vary depending on the market tolerance for damage, and the cost of control measures. It is difficult to predict damage levels from the number of adults caught in traps, but a widely used monitoring service in the UK recommended that protection should start when 2-3 flies are caught per field in one week, and should continue until counts decline.

The sticky traps are not specific to carrot flies, and there are some non pest flies that have a similar appearance. Figure 3 shows an adult carrot fly on a trap. They have clear wings, a shiny black thorax and abdomen with few hairs, an orange head with dark red eyes and translucent orange legs. With a bit of experience, the combination of these features makes it relatively easy to distinguish carrot flies from the other species trapped.

Currently available pesticides are unlikely to provide acceptable control of large populations, so cultural
methods for managing local populations are important for organic and conventional growers alike. Since carrot rust flies are relatively weak flyers, populations tend to be localized. Populations decline the further away susceptible crops are from the previous overwintering host crop. Flies probably travel less than 1000 yards in search of egg laying sites. The adults are attracted to the smell of a host crop and fly upwind towards the smell. Isolation of crops from previous years’ fields can significantly reduce carrot fly risk, especially when the new crop can be placed downwind of the previous crop (figure 4). 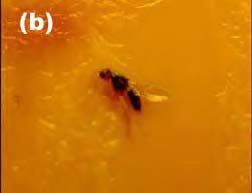 Organic growers have few available insecticides. Some formulations of spinosad, neem, natural pyrethrum and other materials are allowed for use on organic farms. Some of these products may have some efficacy, but remain largely untested in the Pacific Northwest. Conventional growers often use diazinon at planting and zeta cypermethrin (Mustang) during the season. Mustang is only effective against adults and to be effective, egg laying should be minimized. Therefore, it is prudent to time sprays with trap counts.

Small organic farms sometimes control carrot flies with row covers. To be effective, crops should be covered as soon as they emerge whenever carrot flies are active. Special attention should be paid to keeping the crop covered and the edges of the row cover secured. As already mentioned, sticky traps can be used to determine periods of low adult activity when row covers can be removed with little risk of damage. If flies are allowed to lay eggs before a crop is covered, the larvae and subsequent generations will be trapped under the row cover and are capable of causing substantial damage.

An integrated approach to carrot fly management is critical for both organic and conventional farmers. Whenever possible it is helpful to work with neighbors to reduce the overall population in your area. Feel free to contact Nick Andrews if you would like help monitoring carrot flies or would like to discuss the most promising management strategies for your farm.