Every February, small and mid-sized organic farmers from the Pacific Northwest gather at Brietenbush Hot Springs for a three day farmer-tofarmer exchange. The gathering is unique, in that the programming and sessions are completely organized and facilitated by farmers, with virtually no participation from agricultural professionals, Extension staff, or industry representatives. The information exchanged is hard-won, practical and peppered with the humor and inspiration of resourceful and problem-solving farmers. The exchange opens with a session of “Ahas and Uhohs” with lessons farmers gleaned from the past season. 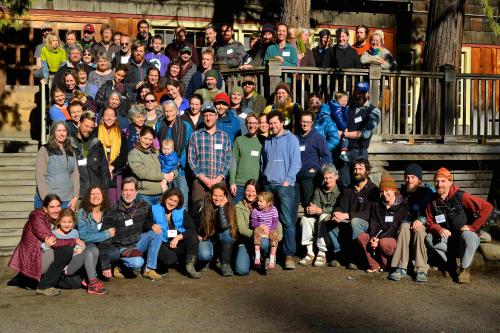 Highlights from this year include the following:

One farm struggled with a pernicious, rhizominous grass (probably quackgrass) for many years. In the spring of 2015, they disced up the grass and then planted buckwheat. The grass was severely knocked back for the entire season.

Another farmer realized that he is unable to do everything on the farm so learned to be a better delegator.

A farm near Portland had a turbulent year financially in 2014, so took time in the winter of 2015 to do some big-picture planning and re-visioning of the farm. They ended up growing too much of certain crops that they couldn’t move through regular channels and so approached New Seasons Market. The result was a new relationship with New Seasons, which now regularly buys a number of products from them.

Another farmer had always maintained a relaxed attitude about giving employees days off but realized that he needed the consistent help, so developed a protocol for days off.

A farm from Washington State is grappling with unaffordable healthcare for their employees and still hasn’t figured a great solution. They also highlighted the importance of doing variety trials every year even on the most reliable varieties, explaining that they are able to get free seed from seed companies and continually refine their varietal selections.

A CSA farmer explained that she learned a new way to handle negative feedback from CSA members. Instead of becoming defensive, she now expresses gratitude for the feedback and offers a farm product as a reward for providing feedback. She also discussed the importance of communicating clearly with employees about a farm’s policy on posting photos on social media. Many younger employees are accustomed to posting on social media forums all the time, and may forget that a farmer wants to present a certain image of their business or may be concerned about their privacy.

Two farm managers expressed their appreciation for working for a farmer who is a very talented marketer. They also realized how important employee retention is, as retraining a new crew takes a lot of time.

Another farmer decided to have one worker make lunch for the entire crew every day, and everyone benefited. Lunch became the highlight of the day and did wonders for employee morale.

One farmer described the joys of scaling back; she has stopped doing farmers markets and focused instead on making her farm store more profitable. She encouraged other farmers to “stop putting on more hats.”

A farm in the Willamette Valley had declining sales at one of their mainstay markets. They changed the market staff and the design of the booth and saw sales increase immediately.

A farm couple in Southern Oregon with a relatively new farm stand had stocked up on produce right before Thanksgiving but found that no one was stopping by. They posted messages on social media and saw an immediate increase in the volume of customers and sales.

One farmer had participated in the OSU Extension Cost Study/Profitability Cohort during 2015, and had tracked many of his labor costs. Based on the numbers he crunched at the end of the season, he realized that direct seeding crops was almost always more profitable than transplanting; that he needed to charge more for minimum deliveries ($75); and that farmers markets took too much time and labor to be profitable for his farm.

Another farm couple realized that they don’t want to farm forever so are looking into succession planning.

A farmer said his family transitioned from sleeping on futons to latex mattresses and everyone is happier and better rested.

One farmer worked with the organization Rogue Farm Corps and hosted four farm interns for the season. She enjoyed the experience of having a “cohort” of interns. Another farmer pointed out to her that if you have more than four un-related farmers you need to be certified as a workers camp with Oregon OSHA.

A farmer from Washington explained the importance of clear structure and communication with employees. He has come up with different titles for employees to help them be more comfortable in their differing roles.

Another farmer also discussed the merits and profitability of scaling down. He has dropped a couple of markets and decreased his crew size, but increased his net income significantly.

One farm gave up their CSA last year, added more wholesale accounts and increased their agritourism events. They had hosted benefit Farm to Fork dinners in the past, but this year treated the dinners as an income stream and were successful.

Another farmer described the experience of walking out to his greenhouse and finding a blanket of flea beetles on his starts. He realized that a mustard seed field was being combined next door, and underscored the importance of paying attention to what your neighbors are doing.

One farmer said that she had suffered from back pain for many years. She now does ten minutes of Foundation Training exercises every day and has been pain-free since.

The Aha and Uh-oh session was followed by three break-out sessions in which farmers exchanged tips and advice on everything from soil fertility to farm stands to familial relationships. In between sessions, farmers networked informally and enjoyed soaking in the tubs.