Department of Environmental Quality (DEQ) is updating the administrative rules that govern composting facilities in Oregon. A rule making work group made up of compost industry representatives, regulators and other stakeholders has been meeting since February 2004 to advise DEQ as they draft these new rules. The work group meetings have now finished and DEQ is finalizing the draft rule and preparing for public comment.

The rules focus mainly on composting in an industrial setting, but the current draft rules will increase regulation of agricultural composting. As the only representative of small and mid-sized farmers on the work group I have relied on the advice of a group of farmers who make and use compost. I have attempted to represent their concerns; however, public comment from farmers is critical if agricultural interests are to be adequately considered in the final stages of this rule making process (see “public comment” below). The draft rule has changed dramatically throughout the process and there were widely divergent perspectives and opinions on the work group.

The impact of composting on water quality is a major concern for DEQ and the new rules will include stricter controls to prevent compost leachate from entering surface and ground water. Most commercial facilities will be required to install concrete pads or other permanent surfaces, and leachate collection and treatment systems. Farmers prefer green solutions to steel and concrete and most would not install concrete pads on their farmland. Many agricultural composters regularly move piles to different areas on their farm, then produce crops on land previously used for composting. They compost in an agricultural setting and have access to a large land base rather than a small industrial lot. Farmers can protect water quality by managing pile moisture and covering piles to minimize leachate production. They can also move piles to prevent leachate from saturating the soil in one area. For these reasons, a variance from the requirement for concrete pads was recommended for seasonal and temporary compost piles on farms. The variance was opposed by some commercial composters.

The DEQ administers regulations that govern the management of solid waste, including composting. They have established a Memorandum of Understanding (MOU) to work with the Oregon Department of Agriculture (ODA) who will administer  these rules on some farms using agricultural compost management plans (ACMP). These plans are written to meet the same environmental standards as DEQ permits. DEQ permit fees can be expensive and are out of reach for most small and mid-sized organic and sustainable farmers who usually do not charge tipping fees and who use compost as a soil amendment. Agricultural representatives felt that farmers are more accustomed to working with ODA, and ODA inspectors are more experienced at addressing environmental concerns in agriculture. We urged DEQ to allow ODA to administer the new rules on farms. In the current draft of the rule some farms will be regulated by DEQ permits, some will have ODA ACMPs, and the smallest will be exempt from regulation. 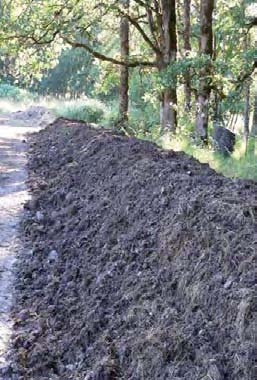 In the latest version of the new draft rule, feedstocks have three new categories (see Appendix A). Farms composting less than 20 tons of type 3 feedstock or less than 250 tons of type 1 or 2 feedstock will not need a DEQ permit or an ODA ACMP.

Farmers composting more than 250 tons of any material from any source, including their own farm, will now need an ODA ACMP. An ODA ACMP will be required whether the compost stays on the farm or is sent off the farm. Additionally the proposed rule will limit non-agricultural supplemental feedstock to 500 tons of type 1 or 2 material (ie. leaves, vegetative food waste, sawdust, wood chips and yard debris). The proposed rule does allow farms to use agricultural waste under an ODA ACMP whereas the current rule requires a DEQ permit if agricultural waste from other farms exceeds the calculated supplemental amount.

A previous draft of the rule required DEQ permits if a farmer uses any supplemental non-agricultural waste. This was supported by many compost industry representatives who urged the DEQ to prohibit composting of materials like leaves on farms unless they have a DEQ permit. Our concern with this stringent approach was for row crop farmers and livestock producers with limited access to agricultural feedstock. In many areas of Oregon leaves, vegetative food waste, forestry waste and other non-agricultural type 1 feedstock is carefully composted on farms. This practice helps to increase recycling of these materials while keeping costs down and helps to improve soil quality while protecting the environment and human health. With ODA oversight such compost piles can be managed in an environmentally safe manner and sustainable farmers can be allowed to improve their soil quality in a cost effective way. If DEQ permits were required, on-farm composting would likely be unnecessarily inhibited.

On-farm composting can improve Oregon’s soil quality and create a stronger, more resilient and more cost efficient organic waste recycling system. Regulations should protect human health and the environment while promoting composting on Oregon farms. DEQ needs to hear from farmers and other agricultural representatives in order to take agricultural interests into account during the final stages of rule making.

Public comment periods are expected to be the third week of February with meetings in Portland, Eugene, Bend, Medford, and Klamath Falls. Additional changes in the rule are possible and DEQ needs to hear from agricultural representatives in order take their concerns into account. Important points that have been made by agricultural composters include the following:

Additional information and the schedule of public hearings will be available at the DEQ website. Public comment can also be sent to Pat Vernon, Solid Waste Policy and Program Development Section, 811 SW Sixth Ave., 9th floor, Portland, OR 97214.

Wym Matthews from the ODA will be presenting information on the draft rules at the North Willamette Horticulture Society Winter Meeting on Tuesday January 15th at the Clackamas County Fairgrounds in Canby, registration information is at: http://oregonstate.edu/dept/NWREC/Banners/Events.html. DEQ and the Composting Council of Oregon are having an informational session to provide information for people wishing to make public comment. This event is on Tuesday January 29th at the DEQ offices from 10AM–1PM in EQC Room A on the 10th floor at 811 SW Sixth Ave., Portland. 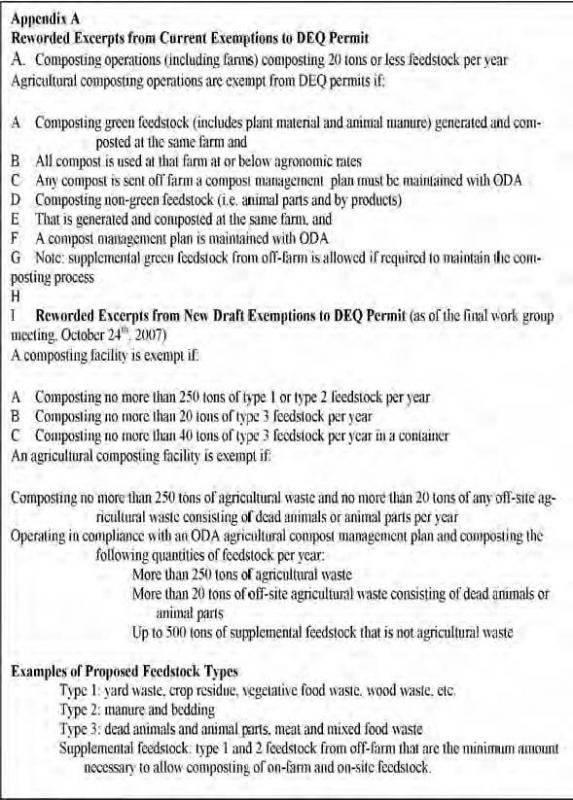