Bernet Farms in Scappoose, Oregon has begun a new era thanks to 26 year old, Gary Bernet. Fred Bernet, Gary’s grandfather, operated the Bernet farm as a dairy until 1974 and even though most of the land has been leased for over 30 years, the farm has remained a centerpiece for his family. 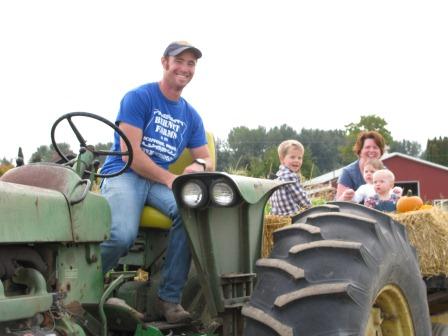 Gary wasn’t exactly planning to be a farmer when he graduated from the University of Portland with a marketing degree in 2006. He took a job, learned new skills and put his hard earned degree to work. But, it didn’t take long for Gary’s goals to shift. “I was sitting in an office and kept thinking there is so much I could be doing on the farm,” says Gary. He needed to be outside, he wanted to restore the family farm, and he could put his marketing background to the ultimate test.

Since no other family members have the desire to farm, Gary’s grandparents made him a deal and offered a portion of the land to work with. As a social kind of guy who enjoys events and has a talent for having fun, agri-tourism was a natural fit for Gary’s personality and is a major component for the farm business.

A year was spent researching ideas, developing a plan and learning a lot from visiting with experienced farmers, also known as old timers. “You just have to listen and then separate their stubborn habits from the efficient ones and apply what you can to your own situation,” says Gary. He also spent 6 weeks participating in Growing Farms: Successful Whole Farm Management workshop series offered by the OSU Extension Small Farms program.

“Growing Farms gave me a better grasp of the whole farming picture. It’s easy to focus on the parts you want to see, but the course forced me to look at all aspects of a farm business, not just growing a crop.”

In October 2010, after several months planning, farming and cleaning up the land, Bernet Farms’ pumpkin patch and corn maze opened for business. Even though the profit margin was slim, Gary considers his first season a success.

With marketing and branding efforts, the 2011 season which began October 1st is bound to be a draw for more families seeking fun on a farm. The Bernet Farm logo can be found nearly everywhere in Scappoose. T-shirts are worn regularly by all of Gary’s friends and family around town and free tote bags have been given to customers purchasing at least $20 at the farm. Unique marketing efforts such as advertisements at the local movie theater, gas station and a meet-and-greet at the Sauerkraut Festival have been new ways to reach out. A Facebook page and website are methods for outreach beyond the local community.

This year, nearly 5 acres are ripe with 35 varieties of pumpkins and gourds and some seasonal produce. Visitors may weave through a 4 acre corn maze which is said to be haunted after dark, enjoy hay rides, a farm animal looking zoo, pumpkin catapulting and even face painting on the weekends. On October 15th which is considered the height of the season will be the 1st annual Pumpkinfest and Pumpkin Run. 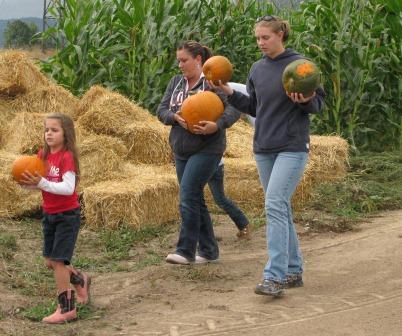 Planning different events on the farm is needed to help improve cash flow throughout the year. Bernet Farms will be a hosting a wedding next summer, which will be a test run with a large formal event, though Gary has been successful in organizing a horseshoe tournament for over 100 participants. He also harvests hay in the summer and sells it in the winter, has a wholesale market for pumpkins and for now, has a part-time job off farm.

For the month of October however, all efforts are on selling pumpkins, scaring people in the corn maze and generally enjoying the fall season while encouraging others to do the same.

The farm is open Wednesday- Sunday through October 31st from 9 a.m. to dusk. Visit the farm website at http://www.bernetfarms.com or find Bernet Farms on Facebook.