Women’s agricultural networks are active in many states, especially in the Northeast. Based on the Northeast model of women’s agricultural networks, in October of 2007, the OSU Small Farms Program founded the League of Women Farmers in southwestern Oregon. The group consists of over fifty women farmers from Jackson and Josephine counties who are farming on a very smallscale and marketing directly to consumers in the Rogue Valley. The group has been meeting for almost a year on a regular basis and continues to grow. 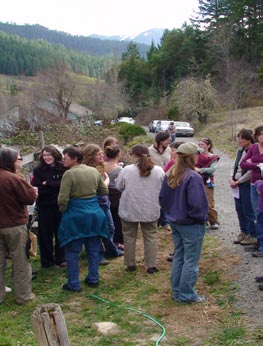 The group convened in October of 2007 when Maud Powell and Melissa Matthewson invited thirty women farmers from the Rogue Valley to an introductory meeting. Fourteen women attended the first meeting and came up with a six-month schedule of activities and tours. The basic design, thus far, has been to alternate between potluck discussions at OSU Extension office in Central Point, Oregon and farm tours. We have toured seven farms so far—many of them diversified farms with animals, fruit and vegetables. We have visited an organic seed farm, a diversified farm that raises milk cows, laying hens, pigs, vegetables and bedding plants, an organic flower farm, a pear orchard and ranch that raises milk goats, pack goats, pigs and broilers. We have also discussed the philosophy of farming, balancing families and farming, marketing as well as weed control and identification. We have also eaten really good food together, much of it produced on the farms. In October of this year, to celebrate our one-year anniversary, we will show a documentary called Ladies of the Land in which four women small farmers are profiled with a facilitated discussion after the viewing. The group has grown quite a bit as more women hear about the tours and meetings and join the group. It is inter generational with many young women farmers involved as well. The Capital Press featured the group on the Small Acreage page in the newspaper on March 2008. Many of the women farmers are finding great value in getting together once a month to share their stories, successes and challenges of farming. It is also a wonderful social outlet for women as many of them work on the farm and rarely see other women farmers throughout the season. New ideas are being generated at each meeting as well as new ventures and relationships. There has been talk of cooperative marketing endeavors, trading of agricultural products as well as research projects and educational workshops. We are currently applying for a SARE grant to organize an on-farm demonstration of how to build small structures on the farm, a topic that the group identified as being important, that is, carpentry for women!

The group membership is very informal and new members are joining every month. OSU Extension has been facilitating the group by helping to organize guest speakers, farm tours and announcements to the group. All in all, we are astonished by the number of women farmers in the Rogue Valley and the creativity and dedication each has to their own farm as well as to the whole of agriculture in this region. We are encouraged by this community and look forward to its continued growth and success. If you would like to hear more about the group in southwestern Oregon, please email Melissa Matthewson.

Planning is currently underway to begin a women agricultural networik in the southern Willamette Valley. If you have interest in participating in a start up meeting later this fall, please contact Melissa Fery in the Benton County by email or phone at (541) 766-3553.