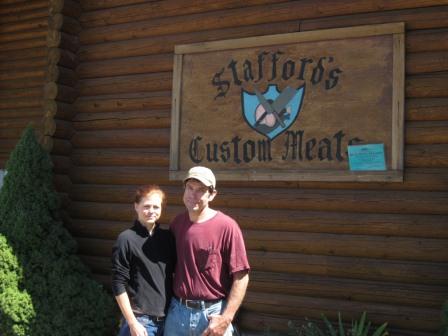 Why now? The plant was physically ready for years: what owners Jeff Stafford and Jenn Layman were waiting for was enough business for enough of the year. Small processors are almost overwhelmingly busy in the late summer, fall, and early winter. Yet the seasonality of livestock production often means that business drops off sharply in January for several months. Without throughput, most shops have to lay off their workforce, which makes it very difficult to build and keep a trained crew.

As interest in local and regional meats grew, Stafford fielded more calls from producers who wanted him to be USDA inspected, so they could sell cuts and not just on-the-hoof sides and quarters. “I always said, bring me the business and we can do it,” says Jeff. But none could commit to bringing him enough animals enough of the year. He estimated that with 500 head per year, on a fairly year-round basis, he could keep a quality crew and build stability. “Hiring people for three months, then laying them off – that’s heartache for a business.”

Enough commitment finally came from Lostine Cattle Company, which had been a custom-exempt customer for several years. Their direct marketing business, pairing beef and wine, required USDA inspected processing. Key to the deal is that Lostine needs processing in the typically dead winter months.

With the commitment from Lostine, and other area producers, Stafford’s can now hire a year-round crew and know that their investment of time and training will pay off. It has been challenging to find the right people: “experience doesn’t matter as much as desire and a solid work ethic,” Jeff says. “We can train them.” But Jeff and Jenn are excited about a young butcher-in-training they recently hired. “On his first interview, we gave him a knife, and he pulled a tri-tip correctly his first try.”

Jeff Stafford grew up in the business. His grandfather started it in 1939, in Lincoln City. Jeff’s parents retired, and Jeff struck out on his own, buying an existing small custom-exempt shop in Elgin. Three years later, he built a new plant on the site, designed to meet all the requirements of USDA inspection. Yet as he was finishing construction, the regulatory world changed: the Jack in the Box E. coli O157:H7 poisoning in 1993 led USDA to require processors to operate under the Hazard Analysis Critical Control Point (HACCP) system. The transition was difficult for many small plants. The Staffords saw more small plants closing than opening and decided to stay custom-exempt, which was keeping them plenty busy (they also processed game until 10 years ago).

Stafford’s now offers USDA inspected slaughter and processing of all four-legged red meat species: cattle, bison, lamb, goat, and hogs. They grind and make patties under inspection but continue to do other value-added processing (curing, sausage, cooked meats) under custom-exemption for the owner’s use.