A new study by the USDA Economic Research Service reviews the economic and ecology literature on land use, land cover, and the health of pollinators. 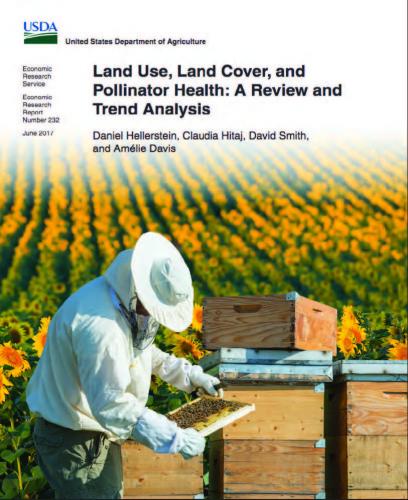 Crops that depend on pollinators account for up to one-third of total U.S. food consumption. However, honey bees and other pollinators face a variety of stressors, including diseases, insect pests, pesticide exposure, and changing landscapes. Over the last decade, annual losses of managed honey bee colonies have been high. Better nutrition for pollinators may help alleviate the effects of some of the stressors. Changing the Nation’s land uses and land covers (LULC) —such as by planting vegetation rich in nectar and nutritious types of pollen—may improve the forage available to pollinators. This study reviews the literature on the effects of land use on pollinator health and examines trends in pollinator forage quality as LULC has changed in the United States over the last 30 years.

The study reveals that both managed honey bees and native pollinators face several sources of stress that affect colony health. The main findings include:

• Honey bee mortality, as measured by the loss of a honey bee colony, is higher than in previous decades. Annual losses varied between 29 and 45 percent of colonies from 2010-11 to 2015-16.

• Assessing the status of native pollinators is difficult because long-term population data are not available. However, evidence points to population decline for several wild bee species (notably bumblebees) and some butterflies, bats, and hummingbirds.

• Adapted practices include splitting a honey bee colony and adding a new queen to one of the splits, systematic monitoring of colonies for pests and pathogens, and supplemental feeding.

• The number of honey-producing colonies has increased by 9 percent from 2.44 million in 2007 to 2.66 million in 2015. Over the same period, the value of production of the top 10 pollinator-dependent crops grew by a weighted average of around 76 percent.

The study also reveals evidence of how LULCs that contain vegetation beneficial to pollinators improve both pollinator abundance and health and can lead to better agricultural outcomes. The LULC-related needs of native pollinators differ from those of managed honey bees.

• Native pollinators benefit from access to nearby high-quality forage habitat—habitat that is both rich in plants that provide pollen and nectar and that contain nesting opportunities.

• Managed honey bees are often transported from location to location by their beekeepers to provide pollination services and to increase honey production. Thus, the overall availability of forage may matter more than its exact placement. For example, the provision of high-quality forage land in the Dakotas, where many honey bee colonies spend the summer refortifying themselves, may help improve colony survival rates.

The report concludes with a summary of economic insights on issues facing the development of markets for forage-rich pollinator habitats. Pollinator habitat has “public good” features, so markets to provide better pollinator habitat may not readily develop. This can lead to under-provision of forage-rich landscapes. For example, if a landowner converts land to a honey bee-friendly habitat, his or her honey bees may benefit from this conversion but so, too, will honey bees be managed by others. Thus, the landowner incurs the full cost of this conversion without reaping full benefits. Assigning exclusionary rights for hive placement—as is done in a few States—may encourage beekeepers and landowners to work together to install pollinator-friendly habitat. In addition, the Government can support the creation of pollinator habitats, such as through pollinator-friendly covers on CRP land.

The full report is available at: https://www.ers.usda.gov/publications/pub-details/?pubid=84034