Dry beans (Phaseolus vulgaris) have been a staple food crop throughout the world for centuries and today, along with other grain legume crops, they continue to be a primary source of protein for the majority of people worldwide. In the United States, the primary market classes of beans grown are Pinto, Kidney, and Navy. These beans are grown predominantly by large-scale farmers and it can be difficult for small-scale farmers to be cost competitive. However, there are many lesserknown bean varieties that are not available through the main market that can easily be grown by small-scale farmers throughout Washington and Oregon as well as other regions of the country. These varieties are either heirloom varieties within the main market classes or are colored/patterned varieties that are in classes of their own. In my program I refer to these as ‘niche market varieties’ because they are not produced on a large-scale for the commodity market.

In this study we evaluated 34 dry bean entries for fresh shell and dry bean production at the Washington State University Vancouver Research and Extension Unit in 2006 and are repeating this study in 2007. Preferred characteristics for fresh shell beans include large bean size, large pod size, and a large number of beans per pod. White bean color tends to be preferred for fresh shell beans while varieties in the Cranberry market class are also common. Beans that have a color pattern or a pink color may also be desirable. Entries in this study include common varieties from seed companies and breeding lines from Phil Miklas, USDA-ARS Washington, and Jim Kelly, Michigan State University. 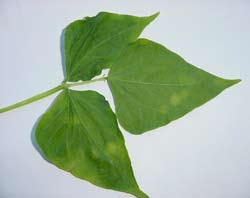 The study design is the same both years and includes 2 adjacent identical sets of plots, one for shell bean evaluation and one for dry bean evaluation. Plots are 2 rows wide and 10 feet long. Spacing between rows is 2 feet, and spacing in the row is 2 inches. Plots are arranged in a randomized complete block design with 4 replications. Beans were planted May 15, 2006 and May 16, 2007. The field is managed using organic practices.

To measure fresh shell bean yield, 10 plants were harvested from the center of each plot when pods were fully formed and starting to turn yellow. To measure dry bean yield, the center 5-feet of both rows was harvested in each plot for a total of 10-row-feet. For both fresh shell and dry beans, number of pods per plant, pod length, number of beans per pod, and bean yield and size were measured. In this article, only some of the data will be presented and discussed. Our full report is also available.

In order to limit the incidence of halo blight (Pseudomonas syringae pv. phaseolicola), the primary disease affecting our bean field trials in southwest Washington (Figure 1), we converted our bean field from overhead to drip irrigation in 2006. By pegging the drip tape in the bean row (Figure 2a) we are able to cultivate the field for weed control once a week (Figure 2b). By eliminating overhead irrigation, we were able to limit the moist humid environment in the bean canopy that favors halo blight development, and in 2006 we saw no halo blight in our field. Halo blight is a serious bacterial disease that can be seed-borne and can affect next years crop if you plant seed collected from infected fields. Copper sprays can slow the development and spread of halo blight in the field but will not eliminate the disease. To learn more about halo blight symptoms and control options, see the Pacific Northwest Disease Management Handbook halo blight information. 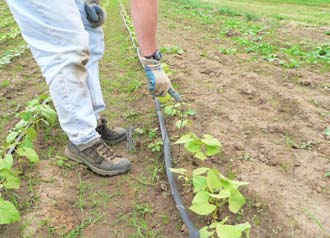 Fresh shell beans. The overall mean number of days to harvest was 96 (Table 1). Matterhorn, PS01-207-2-b3, Red Hawk, Black Calypso and Jacob’s Cattle were the earliest to mature (93 days), while Cannellini and both Flageolet varieties were the latest (101-102 days). All three late varieties had slow emergence due to the cool soil conditions at planting. The overall mean yield was 720 g (per 10 feet row). Vermont Cranberry, White Marrow and French Flageolet Flaro were the highest yielding, while Supremo, Jacob’s Cattle and Black Calypso were the lowest yielding. Plant stand in all Cannellini plots was extremely low (data not shown) and yield 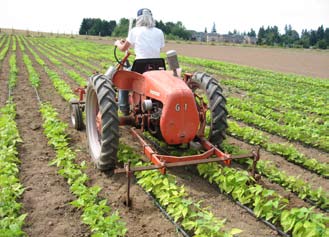 For fresh shell bean production, Cannellini and Flageolet are generally preferred because of their association with southern European cuisine. In this study Flageolet was high yielding due to a high number of pods per plant (data not shown), however bean size was significantly smaller than the overall study mean. White Marrow had a large bean size, was very high yielding, and had the largest number of beans per pod (data not shown), however, emergence was low due to cool soil conditions. Cannellini, Flageolet and White Marrow tend to be sensitive to cold soils and in this study germination and plant stand were significantly reduced due to this issue. In 2007, we have delayed the planting of these varieties by 2 weeks (May 31) to avoid this problem.

The Cranberry market class is also commonly used for fresh shell bean production, and PS01-207-2-B3, Tongue of Fire and PS01-203-2-B3 had the largest 100-bean weight. However, except for Vermont Cranberry, yields of all Cranberry entries tended to be below the overall mean. Supremo produced the largest beans, but yield was very low due to a low number of pods per plant (data not shown).