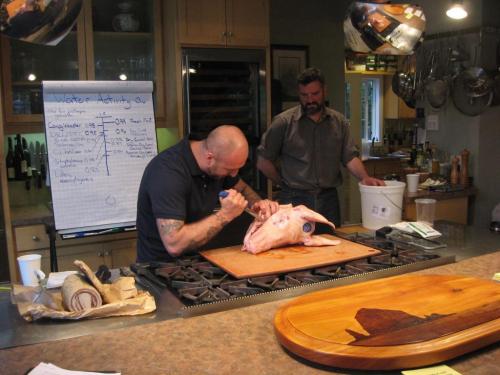 “Charcuterie” covers a wide range of specialty meat products, from familiar ham and bacon to the fairly well-known prosciutto to the much less common (at least around here) cured pork jowls. Charcuterie products not only taste good, they let meat producers and processors turn low-end cuts and otherwise not very saleable parts of the animal (jowls, for example) into high-end food.

Consumer interest in charcuterie appears to be on the rise across the country, and certainly here in the Pacific Northwest. Livestock producers selling into local markets are increasingly looking into their charcuterie options.

Yet making charcuterie is not without cost and complication. While the most basic – like meatloaf – are pretty simple, others – like coppa salami – can be lethal if not made correctly. Because of this, an additional set of regulations applies, above and beyond those related to fresh meat.

Last fall, the OSU Small Farms Program, and Clatsop County Extension collaborated on a day-long workshop to sort out these complexities. “Farmers, Chefs, and Local Charcuterie” was held on September 26, 2011, at the EVOO Cooking School in Cannon Beach, on Oregon’s North Coast. The session was part of a project funded by the Western Center for Risk Management Education to help small- and mid-sized livestock producers manage risks related to niche meat markets.

We spent the first half of the morning sorting out the rules: what laws and regulations apply, and what agency has jurisdiction over what kinds of businesses and products. Will Fargo, Environmental Health Specialist in the Food Safety Division of the Oregon Department of Agriculture, covered the federal and state rules. Maureen Taylor, Registered Environmental Health Specialist with Clatsop County Public Health, then went over the Oregon Food Code and Oregon Health Authority food handling rules relevant to charcuterie. Together, Fargo and Taylor explained a key regulatory concept for charcuterie: the Food Code variance requirement. If you make a meat product (for sale) that doesn’t follow Food Code rules, especially temperature, you must apply to county health for a variance. For example, if you’re making dry cured salami, and you dry hang it under refrigeration, you don’t need a variance. But if you dry cure at a temperature higher than 41F, you need a variance. To be granted a variance, you have to have a valid HACCP (Hazard Analysis Critical Control Point) plan that clearly explains your production process, identifies potential hazards and explains how you will prevent those hazards from occurring.

The variance requirement is fairly new in Oregon, which adopted the Food Code in 2002 but without the variance language until 2 years ago. Before then, county health would just say no, you can’t make those products (unless you’re federally inspected), though apparently many restaurants just did it on the sly. During the second half of the morning, Dr. Karen Killinger, a food safety expert from Washington State University, gave us a tutorial on the wide range of pathogens and food safety risks related to a variety of charcuterie products. She also explained different interventions that can be used to prevent the growth of these pathogens and food-borne illnesses.

After a delicious buffet lunch, provided by EVOO owners Bob and Lenore Neroni and several chefs who attended the workshop, participants were then treated to a charcuterie demonstration from two regional experts, Eli Cairo and Tyler Gaston of Olympic Provisions.

Before co-founding Olympic Provisions as chief salumist, Eli spent years training with charcuterie masters around Europe. Olympic Provisions, based in Portland, does all its production under USDA inspection – the highest level of regulatory compliance for meat products.

Eli began the demonstration with a pig’s head and showed how to carve out the jowls to make guanciale, or cured pork jowl. After explaining the full process, he moved on to coppa, the spicy cured front quarter of the pig. Coppa requires a 60-day hang at room temperature – definitely outside Food Code temperature requirements – so a variance would be required.

Eli highlighted the importance of recognizing good fat versus bad fat: “Eighty-five percent of all salami producers use belly fat and leg fat because it’s easy to cure and holds together, but it’s too soft and gooey. Instead, we only use back fat, which is hard and stays cured. And it’s buttery.” He also went over how to make dry-cured chorizo, as well as several other pork products.

After years of experience with charcuterie, Eli has a healthy respect for the dangers. He repeatedly warned participants to be very careful making these products unless they could actually do all the required testing and tracking along the way.

“A restaurant kitchen can be really rushed, crazy, and stressful,” he said, “and some things shouldn’t be made in that situation. Make meatloaf, make paté. But as for curing, fermenting, and smoking meats… unless you have really good control and knowledge, you should steer clear. It’s a lot of science, a lot of sanitation, and it’s really easy to make people sick.”

His warnings did nothing to dampen the excitement, however, and the workshop was clearly a big success. In the days that followed, local farmers reported an immediate rise in demand for pig heads, as local chefs branched out into new charcuterie terrain.

Workshop presentations (except the demo) and a list of food safety references are available as pdf; contact Lauren Gwin at lauren.gwin@oregonstate.edu. If you want to make or sell these products, in either a restaurant or retail setting and are unsure if they require a variance, contact your county health department.