In the dark of winter, a gathering of small-scale organic farmers from the Pacific NW left their respective farms and traveled the Cascades for the 10th annual NW Farmer to Farmer Exchange, where they shared, peer to peer, the tips and travails of another year of growing vegetables organically.

For the last ten years Oregon Tilth and Organically Grown Company both have been supporting the two-day Exchange, keeping the price low for small-scale farmers to attend and share valuable insights with other experienced organic vegetable growers who are making a living from the farm. Here are some rapid-fire notes captured during the freewheeling gathering.

All the farmers identified are on first name basis. 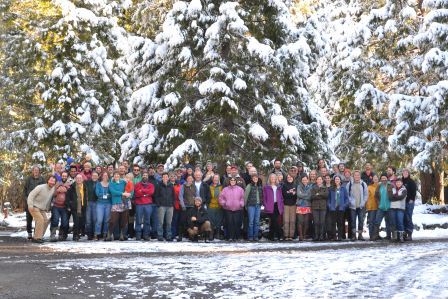 Growers recalled their experiences with various crops and shared the following tips.

Cabbage: Mammoth Red Rock (Fedco), Dead On and Purple Savoy (from Johnny’s) were recommended. Elanor got some other varieties from Osborne Seeds that were similar to Petrosa. Their Super Red 80 can freeze solid and still be good when it thaws.

Overwintering cauliflower: Madiot, Galan and Maystar from Territorial Seeds were popular the farmers were transplanting them around July 4th.

One grower asked how to make their soil fertile in one year. Robelee advised to be sure to provide enough N, and enough lime to get the pH within range. Tom improved his clay loam soil by subsoiling and incorporating lots of green manure. By doing this they’ve developed a noticeably deeper layer of topsoil after 10 years. They used bell beans, vetch, peas and oat cover crops from Peaceful Valley, and let them grow until just before flowering. He uses a lot of gypsum, the pH is 7 so he doesn’t apply lime.

Jeff remarked that he doesn’t apply much compost anymore. After increasing their organic matter, they found that their soil pH is more stable and they haven’t limed in 10 years. They started using red clover in rotation about the same time the pH started to stabilize. They seed red clover with cereal rye or oats at 60-70 lbs/ac. with about 20 percent red clover. They mow to minimize clover seed production, and graze the cover with chickens. In their rotation they disc fields that were in lettuce or spinach then seed the cover crop mix. In the first year the oats and rye dominate, then the red clover comes in later. Red clover is harder to kill than vetch, but it hasn’t been a problem.

Josh brought a blackberry patch into production recently. He mowed them as low as possible to weaken the vines before working up the field. He had to rogue blackberry volunteers, but did get a great crop of onions.

The conversation turned to cover crops. Elizabeth seeded Sudan grass with red clover and let the Sudan die off in the winter, then the red clover came through the following year.

When he can’t get a fall cover crop seeded, Josh plants rye and vetch during the brief period of dry weather in February and gets a good stand. They discussed the importance of avoiding tillage in saturated soils, especially when incorporating cover crops in the spring. One grower monitors moisture with a shovel. He digs up the cover crop and tosses the soil in the air. If the soil breaks up into aggregates and looks like a mole-hill, the field is ready to till.

The group discussed how difficult it is to get much cover crop biomass after late harvested crops or before early crops. Some were experimenting with relay cover cropping, one was successful with red clover under the last transplanted lettuce in the greenhouse, another established vetch under kale in September.

Nick saw Jim Bronec’s success relay-seeding cover crops into butternut squash before the vines run when he does his last weed cultivation (July or early August) and has had some pretty good results using a similar strategy with peppers and eggplants as well. Over-head irrigation is important when establishing the cover crop.

Ray applies liquid dairy to supplement the N in high C cover crops or crop residue and speed up decomposition. Josh is naturalizing Mache (corn salad) – a winter annual that grows quite well over the winter.

The group worked with a Good Agricultural Practices checklist to identify specific topics of discussion.

One item recommended monitoring of crop production areas for wild or domesticated animals. Tanya advised training employees to look for evidence of animals – i.e. broccoli with animal manure on it. They train employees to use a dedicated shovel and throw the manure into the bushes, then cut and discard the contaminated broccoli.

Wild geese can contaminate your row and field crops. One farmer has her dog chase off the geese. Another noted that having domestic animals on the fields is in itself a violation of the GAP safety protocols, a bit of a Catch 22.

Elanor suggested using bird netting in the rafters of open air buildings, and spikes with teeth coming out at different angles that prevent birds perching above the packing area.

Steve has a dip tank sanitizer, he uses a food grade bleach as a sanitizer. His work crew washes the knives in the dump tank. Some growers suggested SaniDate (hydrogen peroxide and peroxyacetic acid) as an alternative to chlorine.

Eating and smoking areas are all separate from production and handling. In many cases, this may change the culture on the farm.

A farmer reported using fish waste feedstock. He let his 20 chickens at it right away, then covered the pile with wood chips. Because they grow berries, they also use their chickens to eat anything that fruit fly (Drosophila) might like. They use deep litter bedding for the chickens and scrape it out for composting.

Frank goes to OSU dairy to get the spilled feed, straw, silage, and dairy manure etc. with a small pickup truck. They cover the compost pile with a plastic sheet to keep the ammonia in, which condenses in moisture on the inside of the tarp and gets put back into the pile. When they collect it the pile gets turned once when the truck is loaded. Then they water the pile when they dump it at the farm. When they turn the pile, they peel off the top part of the pile that didn’t heat up, and put it at the bottom of the next pile where it forms the hot core of the next pile. They use this turning method to ensure a very hot (165F) kill step for weed seeds as well as pathogens.

As far as vegetable storage ideas, John uses a shipping container with two loads of hay to line the sides and roof, then covers with a silver tarp. Using a dehumidifier is a must! Stackable crates were recommended to make great temporary shelving, and allow for good air-flow. Persephone Farm uses squash bins to store onions – they have less ventilation than classic onion bins.

Bulb crates from Oregon Flower Bulb Co. were recommended for use in root cellars with a fan at night to pull in the cold air. Wet burlap atop stored carrots helps keep them fresh. Jeff stores his potatoes in five gallon buckets buried in the yard. The lid is level to the ground and covered with straw. This works pretty well.

With onions and garlic, John uses the back of his truck, with the door door during the day. With Silverskin garlic, he has found that 80 percent humidity is fine; it has a tighter skin and is easier to store. Rocambole garlic handles humidity well. It sprouts fast when it comes out of dormancy. Cure for one to two months. If it is not storing well, then bulb mites might be a problem.

Jeff and Carrie recommend horse stall mats to stand on in the wash station ($30 on Craig’s List). They are easy to clean and insulated when it’s cold – good for standing for long time.

Zoe had never tilled under a fennel bed for cover crops before. She reported that all the fennel grew back – one bulb grew back as 4-5 bulbs – they made nice juicy marketable bulbs.

Chris remarked that there is a fine line between scrap metal and things that may be useful on the farm.

Steve now works on his grandfather’s workbench with his father’s tools, he said feels like his Dad and grandfather are both there with him every day.

Brian cut his finger really bad last season, he reminded all of the value of cultivating a healthy attention to oneself. “You only get one body, take care of it.”