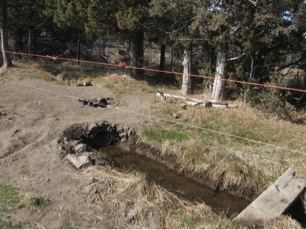 Nobody wants to irrigate with dirty water. In fact, water quality standards are set to keep water clean for irrigation and other purposes. Landowners in the Rancho El Sereno Homeowners Association (RESHA) development near Tumalo are now irrigating with clean water, after local irrigation districts and other organizations helped resolve a neighborhood dispute.

The conflict began because the cows of a landowner adjacent to the development would wallow in the private irrigation lateral that delivered water to RESHA. This activity caused water to pond up and not reach its final destination. “We were losing a lot of water through that lateral,” explains Layne Milowe, the homeowners’ association coordinator. The livestock wallowing and manure also contributed sediment and bacteria to the water, meaning the homeowners were irrigating with dirty water.

Another problem was the poor condition of some of the laterals within RESHA. The homeowners are supposed to keep the laterals going through their property in good condition, but that wasn’t always happening. Many laterals had noxious weeds along them and some homeowners’ horses had unlimited access to the laterals. This meant that horse manure and sediment, as well as weed seeds, were getting into the irrigation water as it made its way through the development. Sloughing ditch banks and weeds were also clogging the laterals through the development, to the point that it was becoming difficult to deliver water to all of the users.

The Homeowners’ Association contacted the Central Oregon Irrigation District (COID) and Swalley Irrigation District for help to resolve the situation. They ended up working with Larry Roofener, operations manager for COID. “There were two things going on,” says Roofener. “RESHA had not provided maintenance to ditch, and the neighbor’s cattle and horses had impacted the ditch and its water quality.”

To raise the issue with the neighbor, COID sent him a letter. “We sent a letter that included an ODA brochure explaining the requirements for canals and ditches,” says Roofener. “Per Oregon irrigation law, and as trustee of the water rights, irrigation districts have the statutory authority to follow the water and to protect the water rights of the water users (even on private properties and ditches. We definitely don’t seek those opportunities, but we have done it more in the past few years because people are not doing maintenance work on their system.”

Says Layne Milowe, “The irrigation district took the high road and sent a letter to the landowner saying a group effort was going to be made to fix the problem and they needed his help to make it happen.”

To explore strategies to improve the condition of the ditches within the development, Roofener brought in Spring Olson from the Deschutes Soil and Water Conservation District (SWCD). “We were working together on some rural projects, and he brought me out there,” explains Olson. “We thought some of the projects might be a good fit for SWCD funding.”

Roofener says the irrigation district frequently brings in other partners, including OSU Extension, the SWCD, and the USDA-Natural Resources Conservation Service, to help their irrigation customers. “We try to be actively involved in the resource community and in OSU Extension’s program called Living on a Few Acres. The more we know, the better we can serve our customers.” 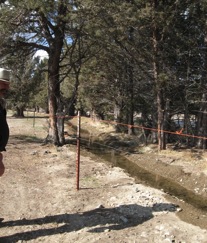 Olson identified the cattle access to the ditch as a water quality concern. She also observed the noxious weeds growing on the ditch banks. “Our role is to help educate landowners about what they can do to protect water quality,” she explains.

To solve the problems, many different people contributed. “The neighboring landowner fenced his livestock out of the whole ditch area,” explains Olson. That helped make sure that clean irrigation water would get to RESHA. Within the RESHA development, “COID went in and cleared the entire ditch line out, did erosion control and re-did one of the weirs,” explains Olson.

“We probably put $2000 of work into the RESHA lateral system but only charged $500,” explains Larry Roofener. “We brought it up to a standard that could be maintained with the expectation that patrons will maintain it.”

“If we really do our homework now to maintain the lateral system, it will last a long time,” says Layne Milowe. “If we don’t keep things up, the noxious weeds are going to return. If the weeds are allowed to take over again, then they impede the flow of water. We need to keep them eradicated from the ditch itself. By keeping them eradicated in general, we reduce the amount of knapweed and thistle. If the seeds go down through the ditch, quite a few of the people flood irrigate, so whatever’s in the ditch goes into the fields. It benefits everybody to keep those clean to reduce number of seeds going into people’s pastures.”

Milowe and other homeowners are extremely grateful to the irrigation districts for their assistance in solving the neighborhood dispute, bringing the laterals into good working condition, and helping clean up the irrigation water. She advises other small acreage landowners who are struggling with similar issues to contact their irrigation district.

“My thoughts would be that if you’re having issues with this, talk to your irrigation district. What COI and Swalley have done for us as far as infrastructure over those 16 years has been tremendous, and all it has taken is discussion. Don’t be afraid to ask – they don’t owe you anything, but they are there to help if you ask. It may not be free, but they might be able to direct you to the right resource. In the long run, everyone benefits.”