Shop At The Dock 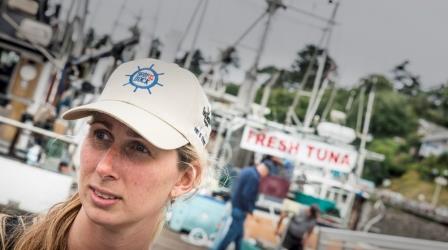 For the past four summers, Oregon Sea Grant has hosted “Shop at the Dock”, a program that takes the public on guided tours of Newport’s commercial fishing docks to learn about how seafood is caught and how to buy it directly from fishermen selling off their boats.

It was a program that started with a simple problem that presented itself in a feasibility study done by Newport Fishermen’s Wives for a seafood consignment shop. The problem found in the study was that most people, even locals, did not purchase seafood directly from fishermen off the docks because they were scared and intimidated by the process. The people that did buy off the docks had learned to do from a friend who helped build their confidence as a buyer. While Newport Fishermen’s Wives decided not to move forward with a seafood consignment shop, the issue presented in the study lingered. 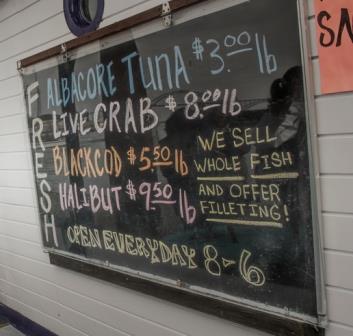 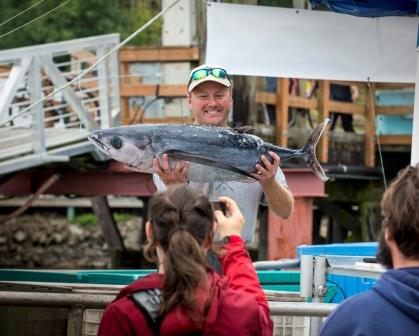 For Oregon Sea Grant, an organization committed to outreach and engagement programs, this was a simple and exciting fix, Oregon Sea Grant would become the friend and help people connect to local seafood that was already available to them. But the program hit some setbacks early on, low attendance in particular. But by year two with the help of local media outlets, the program not only grew but grew too large with 80 people showing up for a single event, far too many for one educator to lead and for vessels to keep up with the orders. In year three, Lincoln County Economic Development helped fund seasonal educators so the program could keep up with demand and offer more tours. Now, with year 4 just wrapping up, the program 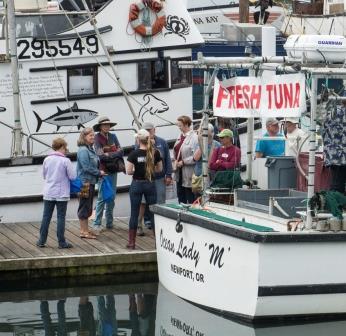 is a favorite of both locals and visitors alike, with many people returning for more than one tour to learn from different faculty and staff members who run the tours. The fishermen that participate in the program are also fans citing that it isn’t just that customers are brought to their boat, but that Oregon Sea Grant helps start the conversation with consumers about quality and sustainability, things fishermen care about too and want their customers to understand. In 2017, the program had about 350 people participate, with consumers spending nearly $12,000 on seafood during the events. However the most impressive impact is running into people on the dock buying seafood who attended Shop at the Dock in previous years. They are now comfortable venturing out and buying seafood on their own and they are teaching others to do the same thing. The program also expanded to Warrenton in 2017, with intentions of finding additional funding and partners in other community to expand to in future summers. 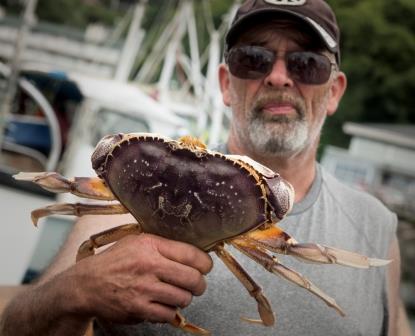 For more information about Shop at the Dock please reach out to Kaety Jacobson at the OSU Lincoln County Extension office, 541-574-6534, or by email at Kaety.Jacobson@oregonstate.edu