During 2013, I had the pleasure to work with the U.S. Postal Service as the anonymous reviewer of their proposed farmers market postal stamp and its accompanying description and verso (brief description). The stamps were issued during August as part of National Farmers Market Week. With the project completed, I no longer need to remain anonymous. As reviewer and not the artist or writer, my input leaned toward keeping the project about food and farmers. 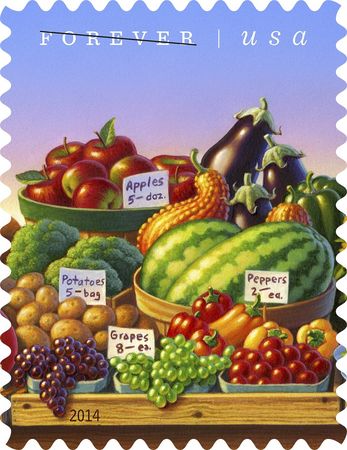 The four stamps are independent segments of the entire artwork showing the bounty of food and flowers symbolizing farmers markets. The stamps are intended to stand alone as art and are “forever” stamps, meaning they are always the correct postage. Text on the back of the 20-stamp sheet describes the appeal of Farmers Markets:

“Farmers markets are an old idea that’s new again. Markets were once the main way Americans shopped. As towns and cities grew in the 19th century, farms were pushed farther from the population hubs, and new distribution systems and permanent in-town shops increasingly became the middlemen between consumers and farmers. However, in 1976 Congress passed the Farmer-to-Consumer Direct Marketing Act, and the number of markets has soared once more.

“Farmers markets flourish in every U.S. state and territory. Some markets thrive in permanent locations that operate year round; others are open only once a week during the harvest season. There are markets that sell just produce and meats; others also offer seafood, breads, prepared foods, or dairy products. Markets might include locally sourced honey or artisan crafts like soaps and candles. Live plants or cut flowers brighten many markets, and some markets feature live music or children’s activities, voter-registration drives, or local master gardeners offering advice. There are almost as many different combinations of goods and activities as there are markets.

“Considered by many to be the new town square, farmers markets offer, as they did in the past, a gathering place for diverse groups of neighbors to meet and mingle and to share news, recipes, and stories-in short, to create a new sense of community.”

The stamps plus framed enlargements, note cards, first day of issue stamps, and more may be purchased at: