Plant in a Box: A Solution for USDA-Inspected Poultry Processing?

David Schafer, owner and founder of Featherman Equipment, spends a lot of time thinking about small-scale poultry processing. “Having raised, butchered and sold pastured poultry since 1994,” he knows the “benefits and the bottlenecks of a poultry enterprise.” While much of the equipment sold by Featherman is geared towards very small-scale operations, David has been working on a solution for USDA-inspected processing for quite some time now. The model is called “Plant in a Box” and aims to be a turnkey answer for those looking to process chickens, turkeys, and other poultry under USDA inspection.

Where did he get the idea? “Like everything I’ve done, it was brought to me by my customers,” David says. His customers are increasingly sophisticated and, “not afraid of the regulations. They know their market and they know what they need.” While in the past, most customers were searching for equipment to process birds under the 1,000 and 20,000 bird exemptions, now more and more are looking for USDA-inspected solutions.

The Plant in a Box unit is built into a recycled shipping container: 40’ long by 8’ wide and 8’ or 9’ high (“high cubes” as they are often called). The unit comes ready to connect to water and sewer with all the required equipment in it for approximately $80,000. A site pad, water, power, and a plan for managing effluent are not included and must be provided on site.

David estimates that a crew of three trained people can process about 500 birds per day and offers this math: “Say you process 500 birds per day, 100 days out of the year. That’s 50,000 birds per year. If you charge $3/bird for processing – the Midwest price – you’ll gross $150,000 per year. Even at half that volume your payback is less than 3 years.”

The Plant in a Box unit takes a chicken from “crate to chill tank”: no storage is included in the space or throughput estimates. David recommends moving chilled poultry with large totes that can be moved with a forklift and wheeled into a separate packaging and storage area or back into the (cleaned) evisceration room for drying and packaging. A video of the Plant in a Box prototype can be seen here.

The first Plant in a Box prototype started operations in 2013 at Maple Wind Farm (MWF) in Richmond, VT. “The ‘plug and play’ aspect was really nice,” says John Smith, poultry manager at MWF. “It was delivered and we were operating under inspection within a week or two.” MWF worked closely with David to fine tune the unit before arrival, as it was the first one in operation. 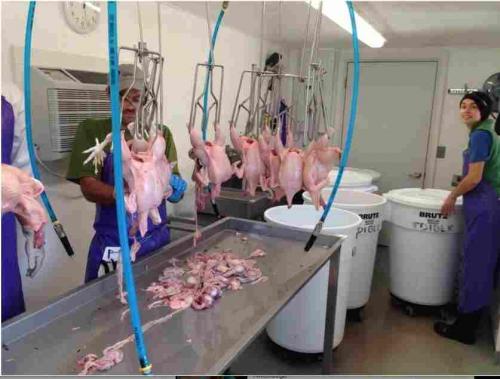 In that first year of operations, the facility was state-inspected (Vermont has an “equal to” inspection program). In 2014, MWF started operating under USDA inspection. MWF has increased their throughput and efficiency over the last two years. John recalls, “one of our best days was 320 birds slaughtered, processed and packaged. We did that with 4 people.” They haven’t reached David’s optimistic estimate of 500 birds per day with 3 people, but they are working toward it.

MWF would like to build upon the Plant in a Box infrastructure and expand their operations to have a separate space for cutting up and packaging birds. Right now, they slaughter in the morning, clean the evisceration room at lunch, and then cut and package in that same room after lunch. It works but involves hauling a lot of things in and out, which isn’t very efficient.

MWF financed the purchase of the PIB using a variety of different sources including the sale of development rights for one of the farm properties to the Vermont Land Trust, a no-interest loan from City Market (a local grocer) that they are repaying with product, and a grant from Vermont’s Working Lands Enterprise Fund.

Labor is one of their biggest costs. As with many meat processing facilities, keeping skilled staff busy year round is a challenge for MWF. “We’re a three season facility, but we are trying to move in the direction of keeping people busy year round so we can keep them on staff,” says John.

Key to keeping the facility busy is that MWF is its own largest customer, raising and marketing about 60% of the birds they process. They fill in the rest of their processing days with birds from other producers, charging processing fees of $5.50/chicken and $1/lb. for turkey. Their processing customers vary greatly in size: their largest brought them 3,000 birds in one year for processing and the smallest brought 25 birds/year. They slaughter 3-4 days per week and cut-up (their own birds only, this is not a service they offer) one day a week.

John estimates that they need to do at least 20,000 - 25,000 birds per year to cover operating costs. MWF tries to process as many birds as possible on processing days. “Setup and cleanup accounts for a significant portion of our time, and this takes the same amount of time no matter how many birds we do.” Overall, John says the Plant in a Box unit has been a great move for them and he would recommend it to others.

David Schafer has a strong vision for expanding the Plant in a Box concept across the country. He would like to see multiple units in operation, able to share resources, tips, and tricks, and leverage their collective experience.

New to NMPAN? NMPAN is a network and info hub for people and organizations who want small meat processors to thrive. We offer tools and information for small processors and the farmers, marketers, and meat buyers who depend on them. Learn more about NMPAN and join our listserv at http://www. nichemeatprocessing.org.