While the eyes of America were tuned to Hollywood on Oscar night, the real stars of our culture were meeting in the woods and talking farming. The occasion was the sixth annual NW Farmer to Farmer Exchange, a gathering that brought 48 organic farmers together at Brietenbush Hotsprings to share stories, ideas, and skills. What came out of this event was not a celebration of escapist entertainment, but rather real ways to improve biologically responsible farming to further the organic revolution. Topics of discussion included creative control methods, increasing efficiency, growing farmers, safety children on the farm, among others.

Farmer Aha’s and Uh Oh’s are always revealing. Here are some highlights shared at the exchange. Scott from Nash’s Produce in WA, gets creative when preparing a stale seedbed for direct seeded crops. Rather than flaming he now uses a light basket weeder on a 10 day-2 week old bed. This works
well, he drives fast, and saves propane. Elanor O’Brien from Persephone Farm has had success controlling cucumber beetles by planting a perimeter crop of Maxima winter squash around her cucumber rows. Buttercup and Capocha varieties work well too also and have the advantage of being marketable. She finds trap cropping to be effective. Slugs are often problematic, especially in the Coast Range. Wali Via from Wintergreen Farms reported using woven poly wire or tape of electric fence laid on bare ground - about 400’ of it - as control. They have at least two lines of wire. Slug survivors of the first line are zapped by the second.

Efficiency on the farm can be achieved by a good crew, good equipment, or just refining your system over time. With tight profit margins and increases in energy costs, efficiency becomes a cornerstone of profitability.

Steve Fry uses a conveyor that attaches to the back of the tractor, it swings 27’ out into the field. The conveyor runs off the tractor, and everyone gets into a productive groove. Using this tool, a 10-12 acre crop of winter squash can be picked in three days. The squash are loaded to the conveyor and a goose-neck puts them into a tote or pickup bed towed behind the tractor. A conveyor shipped from Michigan costs about $12,000 but paid for itself in one year, with an increase in productivity. The photo shows a similar conveyor used the same way by Praying Mantis Farm in Canby. Another benefit is that soil compaction during wet fall weather is reduced since the tractor doesn’t have do drive over as much of the field. 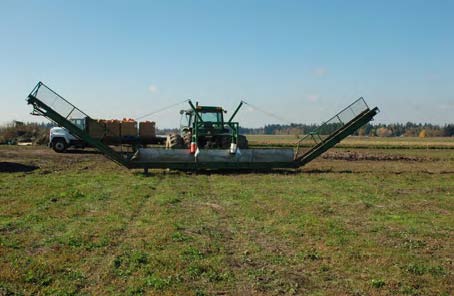 Blue Heron Farm up in the Skagit uses three tractormounted Planet Junior seeders on a bar for their carrots. They experienced poor stands when the seedbed they were preparing wasn’t really smooth, so they dragged a 4x4 piece of wood behind the tractor - in front of the seeder - and got a much finer seed bed and better results. Casey and Katie Kulla from Oakhill Organics are wild about the gator they bought to move pickings and haul everything around the fields and into the barn, it works well even in very wet weather. Meanwhile, John Eveland from Gathering Together Farm swears by small flatbed pickup trucks for the same usage.

Nick Andrews from OSU Extension suggests that when seeding with large and small seeds, to use rice hulls in roughly a 50/50 by volume with your seeds. It helps since the rice hulls hold the small seeds (i.e. phacelia, crimson clover, red clover, etc.) so they don’t settle to the bottom of the hopper in either a drop spreader or seed drill, especially when they are mixed with larger seed. The most efficient workers are motivated and skilled. This will always save a farm in the long run. One farm owner noted that they no longer to shy away from letting workers go if they aren’t performing well. If she isn’t happy with the people, it really impacts her happiness and efficiency, as well as the morale and productivity of her other workers. All in attendance noted that mentoring your employees well is the best way to avoid problems down the road.

Worker safety on the farm is an issue that many overlook to their own peril. Staff safety meetings are required every month. Safety laws are strict, and if you have more than about 12 employees you can trigger a visit from an inspector.

Even organic amendments should be handled with care. Be sure to follow to the letter the safety instructions on the label. Some powdery amendments require the use of a respirator. Be aware however, that if an employee is asthmatic, that using a respirator could trigger an attack.

Children on the farm.

Raising small children on the farm can be a challenge of epic proportions. While the rewards are great, challenges are formidable, especially for small operations consisting of only a couple. This will result in one person switching off with the childcare and the farm work. Infants can be carried around with you in the fields to get the work done, until they become mobile, when all bets are off. Safety is always a concern with kids around. Use extra care. Multitasking by trying to work while looking after them can result in poor results all around. One farmer noted success keeping his young daughter occupied with her own small garden, she could lord over. Empowering and an incredible learning experience. Some of the more experienced parents in attendance reminded others that the early childhood years are the most important, and not to skimp on time or attention. The farm will always be there, but kids are only real young once. Children raised on the farm will grow up to have widely varied skill sets. Whether or not they take up farming as an occupation, they will be connected to their food. This sensibility will follow them for the rest of their lives.

If you can’t grow your own help, and interns come with their own set of pitfalls, where do new farmers come from? Many of the farmers present at the Exchange started out working on other organic farms, some for little money. Some had formal academic training at University of California Santa Cruz, UC Davis and other Universities. Some knew Willing Workers on Organic Farms (WWOOF) volunteers who had made the transition to working on organic farms. A few of the farmers present recounted that they would not have survived low-paid internships if not for the assistance of friends and family. Apprenticeship programs are strictly defined by Federal Rules. According to the Bureau of Labor, you cannot use interns to avoid paying someone else for work. Terms of compensation are strictly spelled out as well, such as room and board. It is best to pay interns at least minimum wage. For more information contact the Bureau of Labor.

One innovative idea that was presented was a farm school on wheels – Green Tortoise style – housing a half dozen or more students. This rolling class and living space could cruise around to different farms and learn with an experienced traveling mentor on multiple farms around the country. This would allow students to get practical experience while seeing how different farms resolve their problems.

Several participants felt that minimum wage is a baseline that most farms should be able to offer new farmers. This puts the onus on interns to perform as a crew, even with the learning curve. Others pointed out that due to the economics of farming, the pay scale for experienced farm workers is often not much more than minimum wage, so they have trouble justifying minimum wage to inexperienced workers who approach them asking for internships. As an employer of new workers, don’t be stressed if you can’t offer constant supervision to a “green” farmer. Many times emergencies come up that preempt any continuum of training, but these should be looked at as learning opportunities in themselves in the dynamic, multifaceted world of the farm.

This article is just a glimpse at some of the information shared. Without exception participants seemed to enjoy the Exchange. Suzy Evans was applauded for keeping the group together and organizing the Exchange since its inception. Oregon Tilth and Organically Grown Company were sincerely thanked for their ongoing sponsorship, at the end of the meeting everyone said goodbye and look forward to a fruitful season followed by another successful meeting next winter.