Jeff Falen and Eleanor O’Brien named their business Persephone Farm, after the Greek goddess of the seasons, but they could also have easily named the farm after Helios, the Greek god of the sun. By installing solar photovoltaic panels on their property, Falen and O’Brien have harnessed the power of the sun to offset part of their farm’s electricity use with clean, renewable energy.

Falen and O’Brien produce row crops on 13 acres of their 55-acre property in Lebanon and sell them at several farmers’ markets in the Willamette Valley. In addition to a greenhouse and row crops, groundmounted solar panels now dot a section of the farm landscape. 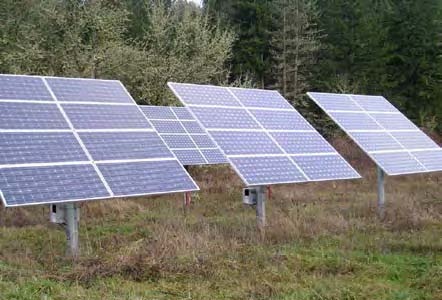 Jeff Falen explains that the farm’s main goal in installing the system was sustainability. “Our goal is to be one hundred percent sustainable. We’re not there yet, but that’s what we’re striving for,” he explains.

Falen and O’Brien installed the first part of the system in 2004. It was a 6-kilowatt system that would offset about one-third of the farm’s electricity use. Along with the solar panels, system components included inverters to convert direct current into alternating current, and an automatic shutoff system that would prevent the system from feeding electricity into the power grid when the power was down, to prevent injury to utility technicians working on the power lines. The system also includes a meter that measures the farm’s electricity use and electricity production. When the solar panels produce more electricity than the farm is converting, the meter spins “backwards.”

“We now have a digital meter that displays our net electricity use,” explains Falen, “but when we first installed the system, we had an old-fashioned meter where the numbers would turn over. We got a kick out of watching the numbers on the meter actually spin backwards.”

Persephone Farm’s solar electric system is net-metered. Falen explains, “At the end of the year, Pacific Power subtracts our energy production from our energy consumption. We are only billed for the net amount of electricity we consume.” Falen reports that the farm’s utility provider worked cooperatively with them to install the system and implement the net metering process. “Pacific Power could have made it difficult for us to complete this project,” he explains, “but they have been nothing but supportive.”

In 2006, Falen and O’Brien added another 6 kilowatts of capacity to their system. Their solar photovoltaic panels are now offsetting about 2/3 of the farm’s electricity use. 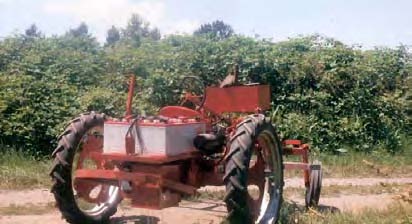 The farm had enough tax liability to use both state and federal tax credits for renewable energy projects, and they also received cash incentives from the Energy Trust of Oregon. Falen reports that Oregon’s renewable energy tax credits have increased from 35% to 50% since the second phase of Persephone Farm’s solar project.

Falen points out that electricity is not the only source of energy used on the farm. “We’ve converted a small cultivating tractor from gas to electric, so the solar panels offset the electricity used to charge the tractor. We currently use a propane heater in our greenhouse, but eventually we’d like to convert to an electric heat pump and increase our solar electric capacity to offset that use as well,” he says.