Season extension is an important part of our farming operation. Our customers really value getting fresh and local vegetables in late fall and early spring. The income from sales through December and starting again in late February and March is a real benefit for us.

We have used greenhouse (hoophouse) space for years to grow vegetable starts for ourselves and our farmer’s market customers. We can get a head start on the season by starting hardy vegetables in the hoophouse and transplanting them in February. Starting in March, we use the hoophouses to start tomatoes, peppers, and eggplants. For the month of May, we sell starts at three farmers markets. The customers love the variety – 30+ kinds of tomatoes, 15 kinds each of hot peppers and sweet peppers, 7 kinds of eggplant, plus several other veggies – and they appreciate the experience which allows us to recommend specific varieties to meet their taste preferences and growing conditions.

This season, Fall-Winter 2007-2008, is the second year we have grown winter greens for our customers, although we have grown them for ourselves for many years. We grow five kinds of kale, collards, spinach, turnip and beet greens, chard, arugula, cima di rapa, and some small Asian greens.

Our farm is in the Gales Creek Valley, at the foot of the Coast Range. Cold air funnels out of the mountains and seems to land right on our field. On a clear night, the temperature is often five degrees colder than Forest Grove, only five miles away, and ten or more degrees colder than Portland. Last winter was the coldest we have experienced since we began farming here in 2000. The ten days in January when the night temperatures got as low as 12ºF and the days did not get above freezing wiped out most winter greens varieties, although the collards survived. As I write this on December 20, 2007, the coldest temperature we have had is 28ºF, and almost all the varieties are just fine. Some of the aisles between our raised beds had standing water for four days after the December 3 storm, and even this did not harm them. The exception is cima di rapa. The plants are alive and even growing but many of the leaves are frost bitten and the emerging buds are mushy.

We start the kale, collards and the beets and turnips for greens by sowing about 7-10 seeds in 4” pots right after the summer solstice and planting them out in the field in mid July. (The turnips were covered with floating row cover to protect them from flea beetles. Some of the turnips themselves are almost soccer-ball sized now, but they are still producing nice leaves and not bolting.) The other winter greens are direct seeded from late August through September. Everything planted before mid- September did markedly better than the crops planted in late September. 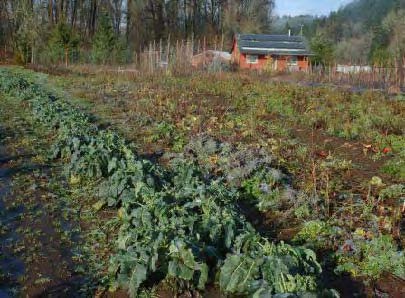 Other than the flea beetles we kept off the turnips, the only pests which bothered these crops are aphids on the kale and, after the rains start, slugs. Neither of these caused enough damage to take any defensive action. The aphids attacked a small minority of the plants, which we assume were less vigorous than the others. By the time the slugs re-appeared, all the plants were big enough to sustain a little nibbling without serious harm. We do check very carefully for slugs after harvesting, since we don’t want to deliver those inferior escargots to our customers.

We don’t sell kale or collards until after the first frost. I had always heard that the flavor is much better after a frost and this year I did a taste test, which confirmed the conventional wisdom.

One way we market the winter greens is as a kale bouquet, a bunch containing White Siberian, Rainbow Lacinato and Redbor. These bouquets are popular with our farmers market customers.

We have harvested all of the winter greens aggressively, since there was demand for all we could pick. The new leaves grow more and more slowly as the light declines, and we will stop harvesting this week at the solstice. If it doesn’t get cold enough to freeze them out, they will start growing nicely in early February and we will start harvesting again a few weeks later. At the end of the season in April, the broccoli-like flower buds produced by the kale and collards are a wonderful bonus.

We use our hoop houses primarily to provide the growing environment for vegetable starts. We have a 10 x 20’ hoophouse which was here when we started farming, and two 12 x 40’ hoophouses we built within the last year, using plans provided in The Hoophouse Handbook, a booklet from Growing for Market.

The old hoophouse has benches made of discarded prune drying racks. The benches in one of the new ones are about 32” high, made of scavenged pallets and 4x4’s. There are no benches in the other new one; the ground is covered with a watering mat.

The only heat in the hoophouses is provided by agritape, an 11” by 25’ strip of mylar with heating elements embedded in it. The agritapes are attached to a thermostat controlled by a probe inserted into one of the pots. This is an energy–efficient system since only the soil is being heated, not all the air in the hoophouse. The tape draws about 10 watts per foot. Agri-tape is manufactured by the Ken-Bar company in Massachusetts and is available through the Oregon Bag Company by special order. 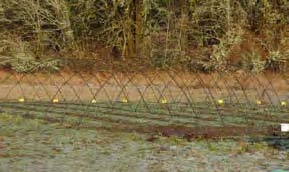 When we are germinating onions, lettuce, or other hardy vegetables, we don’t use the agri-tape. When we are germinating tomatoes, etc. we set the thermostat at 85ºF and cover the flats with plastic domes. If the outside temperature is well below freezing, we add a layer or two of floating row cover. Once the seeds have germinated, we set the temperature a little lower. As the benches fill up, the hardy vegetable starts are moved to tables outside, and the tomatoes are moved to the benches without agri-tape. Again, extra protection on freezing nights is provided by one or two layers of row cover.

We have experimented with alternative materials for the hoophouse frames. One of the new hoophouses has conduit instead of PVC. Some new high tunnels have frames of rebar threaded through old t-tape. Both new are cheaper than PVC, and are sometimes available really cheap at the  Re-Building Center.

The hoophouse without benches is used for micro-greens grown in a mix of peat moss and humus. They are watered from beneath through the watering mat. In summer, this hoophouse will get a shade cloth and become a shade house.

2007 was a lousy year for long-season hot peppers, like habaneros and scotch bonnets. We planted some in the field, but they did not ripen until October. Others were potted into gallon and three gallon pots, left in the greenhouse, and handwatered at least once a day. The fan was turned off, so temperatures reached as high as 125º. We got ripe and super-hot peppers by mid-August.

We see many possibilities for stretching the season even farther. Doubling or tripling the winter greens plantings would allow us to leave some untouched in November and December, and available for harvest through the rest of the winter. The hoophouses could allow us to grow in containers for earlier - and later- harvest of tomatoes, peppers, and eggplants. The rebar tunnels should give a few weeks head start on some hardy salad crops.