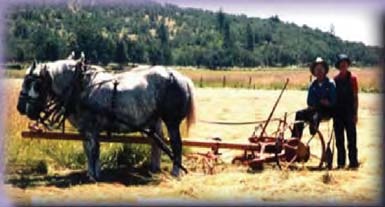 Pam and Charlie Boyer raise sheep and hay on 60 acres outside of Eagle Point. Their farm slopes slightly upward toward Long Mountain from Agate Road with barn, house, green pastures and farm equipment scattered around the yard. What is unique about their farm is the way they raise and finish their lambs.

Pam and Charlie have a herd of 30 Dorset/Texel cross ewes and each year, they boast a 200% lamb crop. Since 1992, there have only been two years out of fourteen that their lamb yields have been less than 200%. Their lambs and ewes are fed grass and hay harvested from their tall fescue and white clover pastures. They only feed supplemental corn and soybean meal to the ewes during the last six weeks of their pregnancy and through the first six weeks after birth. They do this to maintain the ewes weight and keep them milking at a high level 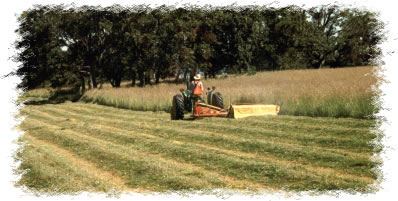 Pam and Charlie rotate their lambs and ewes every three days for six months of the year on four acres. When the forage growth is fast April through July, the animals move through 11 permanent paddocks of high-tensile electric fencing, which is 24" high with three wires. In July when the cool season grasses begin to decline in production, Pam and Charlie add eight temporary paddocks to the rotation in order to extend their grazing season. During the spring, Pam and Charlie hay the temporary paddocks to keep the grass productive and vegetative until the sheep are turned in. In October, the lambs and ewes go out onto the hay fields until shearing and lambing February through April. In terms of design, their paddocks are rectangles-25' wide and 350' long-with an alleyway alongside in which they open one paddock gate to let the sheep in to graze.

Mowing is sometimes required in the 11 permanent paddocks during the spring when the forage growth is highest in order to maintain palatability of the grasses. 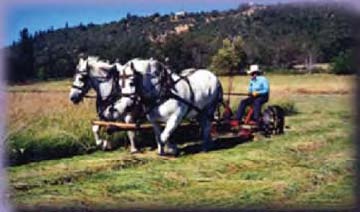 Every two years, Pam and Charlie take a soil sample of their fields to assess their nutrient base. In general, they will fertilize their fields if they have the resources to do so, but in some years, they forgo fertilization. Charlie has not seen any short-term effects from not fertilizing in some years. By adding white clover to their pasture mix, they are assisting with the nitrogen fertilization process. The organic matter content is also high with their mixed species pasture, which in turn promotes benefi cial soil organisms. They do not have any weed problems because of their intensive rotational grazing system. They do have to battle creeping buttercup occasionally as it comes onto the farm with the irrigation water. They are able to manage the buttercup with an herbicide, which has been applied twice in fifteen years.

The demand for their grass-finished lamb is very high. As a retirement farm, Pam and Charlie are not interested in expanding their flock, but they do think there are many opportunities for new small farmers to get into producing high quality lamb for the local market. Pam and Charlie direct market 50% of their lamb through word of mouth, which they say they will most likely increase this next year. They sell any remaining lambs to a buyer from the Willamette Valley. In general, Charlie says they have worked out their production and marketing system so that the sheep and hay pay for themselves.

Pam and Charlie became interested in the sheep business back when they were considering a career change and looking for a ranch in the West. Through his work with the US Forest Service and BLM, Charlie observed that on the open range, sheep were easier to manage and if you managed them, their impact on the land was less than other livestock. This led them into an analysis of the costs of raising sheep and found that it would be cheaper and easier to raise sheep than cattle. Talk to Charlie and he will tell you what kind of money sheep can make on a small-scale as compared to cattle.

Over the years, Pam and Charlie have found a farming system that works for them-one that provides enjoyment, supplemental income and keeps their working farm alive and well. When asked what advice he has for new farmers, Charlie suggests "Get involved in training opportunities, and I don't mean going back to school, but talk to other ranchers, go on tours, ask a lot of questions. See how others are doing it." Charlie recommends choosing an enterprise based on information gathered from ranchers and farmers while learning as much as you can. Raising sheep is a good supplemental business for small farmers and all it takes is a bit of creativity, ingenuity, research and some hard work.