The Dancing Cow Farm in Prineville, Oregon, operates with a clear philosophy. “Everything on our farm has to have at least two purposes,” says Jerre Kosta Dodson, who with her husband, Sean, manage their 10-acre sustainable farm in Central Oregon. 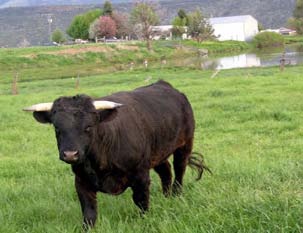 Irish Dexter cattle provide beef, milk and can be used as draft animals. Lavender guinea fowl control insects and serve as farm guardians while a variety of heritage chickens provide meat and eggs. Jacob sheep produce meat and wool and the Icelandic horses are used for recreation and marketing purposes. “This year we plan to train the horses to move the chicken houses,” adds Jerre, noting that recycled horse trailers provide safe night quarters for their free range chickens.

Sean and Jerre purchased their small farm in 2002 and worked hard to improve the land while developing a diverse farm, which has expanded to include 24 Community Supported Agriculture (CSA) members. Located five miles northeast of Prineville, the couple produces vegetables, herbs, flowers, compost, hay, wool, lamb, eggs, chickens and beef.

“When we moved here the land had been overgrazed and the fences were completed dilapidated. We spent the first year just learning about the soil and irrigation, and worked on improving our pastures,” says Jerre. Since both of their mothers had suffered from serious medical conditions, the couple wanted to take a holistic, organic approach to raising animals and growing vegetables. “We learned that healthy foods begin with healthy soils and everything comes from the soil,” she adds.

While focused on a healthy pasture as the foundation of their operation, the couple fell in love with Dexter cattle because of their multiple-use traits. “Their genetics are such that they finish really well on grass so we immediately became a grassfed, grass-finished operation. We started out with 5 cows and we now have 50,” says Jerre, noting that they lease an additional 80 acres to support their  operation.

An intensive rotational grazing plan on the Dancing Cow Farm allows cattle to eat grass down to four to six inches before moving them to another section of pasture. Chickens, contained by portable Premier Net Fencing, follow cattle in the rotation. 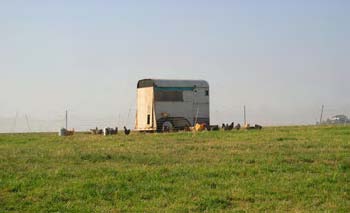 “The chickens peck at cow pies which helps control the fly population, and they also spread organics on the land,” says Jerre. Sheep follow along with the chickens as the animals move through paddocks set up in the pastures. “We have a real diverse pasture and the sheep pick out different forbes and legumes from the cattle,” adds Jerre. “The multi-specie grazing works well and we have a nice even clipping when we’re done.”

To accommodate their small farm, Sean modifies and adapts various tools and equipment. These include a disc mower that easily cuts over the top of uneven ground, a small rake, a small broadcaster and a small baler. “Until two years ago, we had all loose hay and brought everything in by hand so Sean built a buck rake,” says Jerre. The couple later purchased a Japanese developed miniature-sized hay baler that is pulled by a small tractor. This machine produces round bales that weigh only 35 to 50 pounds, allowing their operation to be more manageable.

This is the third year that Dancing Cow Farm has participated in a CSA program where people pay upfront for the opportunity to purchase fresh produce, direct from the farm. The Dodsons began the program with 6 people, grew to 16 last year and have opened it up for 24 members in 2008. CSA subscribers pay $380 for the season, which entitles them to about 18 to 19 weeks of fresh produce, packed up every Thursday. The fee figures out to approximately $20 per bag of produce. 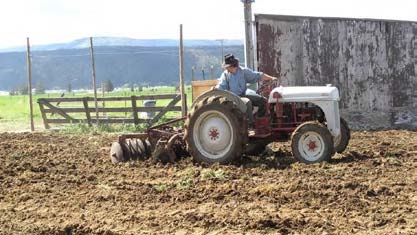 “Starting in June, we fill big brown grocery bags with whatever is ripe in the garden,” says Jerre. “People understand that at the beginning of the season there is going to be a lot of green, a lot of lettuce, kale and Swiss chard. As the harvest comes ready near the end of the season, we have just about everything you can think of. We grow lemon cucumbers, squash, sweet peppers, carrots, onions, potatoes, tomatoes, beans and different types of salad greens.”

Throughout the year, Jerre also delivers about 30 dozen eggs per week to various locations in Central Oregon. Dancing Cow Farm participates in the Prineville Farmer’s Market, a weekly Saturday summer event where local farmers market their produce. Jerre serves as president of this organization.

Sean and Jerre have faced many challenges along the way in developing their operation. As more people pursue this lifestyle, they hope government laws and regulations will change to benefit those involved with small farm production. Through the past five years, the couple has learned and utilized the expertise of OSU Extension Service faculty as well as other specialists in the business. They are excited to share their knowledge and experiences with others who are interested in making a living on small acreage.

“One of the things we would like to do is teach. We’d like to share what we have learned by having workshops, tours and offering classes about different aspects of the farm,” says Jerre. “That’s one of the reasons we have been so diversified. We wanted to learn about as many different things as possible.”

Although the work is hard, the days are long and the sacrifices are plenty, Jerre has no regrets about their decision to develop Dancing Cow Farm. “I am fulfilling my dream of living on a farm,” says Jerre. “I’m surprise that we have grown this big and sometimes have to pinch myself to really believe how much we have done. But I feel this is where we belong, this is what we should be doing.” 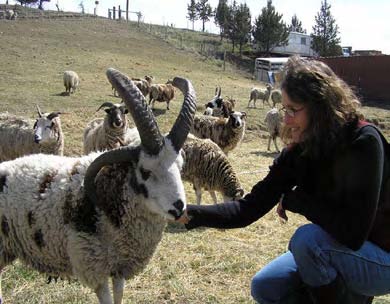