In 2016, OSU Extension, Central Oregon Intergovernmental Council, and the High Desert Food and Farm Alliance conducted a study of the economic pact of local food in Central Oregon. What follows is the Executive Summary of the full report of findings, published October 2017. To read that report or two-page summary, visit the links at the end of the article.

Local food connects communities with their farmers, ranchers and is a value that is important yet difficult to measure. This report attempts to estimate the current and potential economic impact of locally produced food in the tri-county region of Central Oregon.

This report presents finding from a total of 28 farmer and ranchers, or producers, surveyed and details out their earnings and expenditures. Our results show that producers created a total of 28 full and part-time jobs and generated $1.5 million in sales, with $248,000 in wages and salaries on their farm operations.

Our approach to determining these values was to use the input-output analysis using IMPLAN and utilizing the U.S. Department of Agriculture, Agriculture Marketing Services, The Economics of Local Food System Toolkit.

We found that in 2016, the majority of the 28 producers were farming on 10 acres or less of irrigated land, and began their farm operation in the last 2-7 years. Farmers grew 44 varieties of vegetables and other crops and 8 different animals. The majority of sales were beef cattle and vegetables with their primary marketing being farm direct to consumer and wholesale.

Unlike imported foods, which retain $0.28 for every dollar spent, 76 percent of sales by local producers stayed in the local economy. This means that the money spent by producers on their supplies, such as seeds and gas, created an additional 11 jobs and $1.1 million in additional sales throughout the region’s economy. 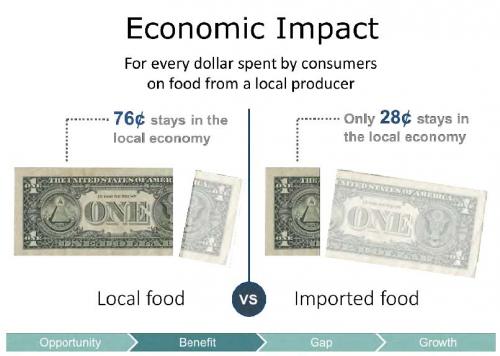 When determining the multiplier effect, which is the ripple effect of spending money in the economy, local farmers were determined to be 1.74, compared to 1.38 for non-local farmers. This means that local farmers support an additional $0.36 of sales throughout the broader Central Oregon economy for every dollar of local produce sold. Comparatively, local ranchers have a sales multiplier of 1.79 as compared to 1.66 for non-local, and support an additional $0.13 compared for every dollar of sales.

The study also estimated the potential growth in the economy by modeling three scenarios: 1) increasing current production; 2) establishing a food hub; and 3) shifting grocery store purchases of vegetables to locally grown from farmers.

Our findings show that by intensifying production levels to $3.1 million, 63 farm and non-farm jobs would be created with an addition of $1.33 million in wages and a total of $5.4 million in sales. This would also require that farmers more intensely use their existing acreage and irrigation and increase the number of greenhouses.

Lastly, by shifting $775,000 of consumer food purchases from commercial grocery stores to farmers in the region, we would gain 13 full and part-time jobs, and an additional $263,000 of wages in the economy; 10 of those jobs would be on-farm with 52% of wages going to farmers.

Overall, the report demonstrates that local food producers have an important role in our economy, and that with minor shifts in overall production there could be additional jobs and revenue throughout the region.