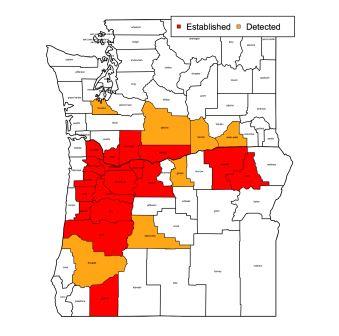 Halomorpha halys, the Brown Marmorated Stink Bug (BMSB), is a native species to Asia introduced on the east coast of the U.S. in the late 1990s. Now, it has spread to 43 states and as far north as two Canadian Provinces. The BMSB has piercing-sucking mouthparts with a straw-like stylet that suck plant juices. They feed on leaves and stems but prefer reproductive structures like fruits, pods, and seeds. Therefore, it is an agricultural pest to fruit, vegetable and grain crops.

The BMSB is also a homeowner nuisance pest because it has overwintering habits to seek shelter in residents’ homes, similar to boxelder bugs and lady beetles.

The Brown Marmorated Stink Bug first appeared in the Portland area in 2004 and has now spread into most Oregon counties that lie along the I-5 and I-84 corridors. The spread of BMSB is likely due to its ability to hitchhike on vehicles and cargo trains. Also contributing to BMSB’s spread is the adults’ great flying capabilities which aid in dispersal.

The BMSB is characterized by white bands on their antennae, smooth shoulders, and mottled brown coloration. Adults look similar to native stink bugs including predatory species like the rough stink bug, which makes it important to correctly identify the insect. BMSBs and rough stink bugs have similar coloration and fall behaviors of seeking refuge indoors to overwinter. However, rough stink bugs differ because of their rough shoulders and solid antennae color.

Adult female Brown Marmorated Stink Bugs lay eggs from spring until late summer. There are usually about 28 clear-blue eggs in a cluster, and the eggs are primarily laid on the underside leaves. The eggs hatch in 4-6 days and the first instar larvae, which are typically red and black or white and black in color, stay around the egg mass feeding on bacteria left by the mother. Once the nymphs reach the second instar stage, they begin feeding on plant tissues including leaves, stems and fruit. As the nymphs continue to grow, they develop the same brown and black mottled coloration as the adults but lack fully developed wings.

The Brown Marmorated Stink Bug is a polyphagous feeder that attacks more than 170 different plant species including agricultural crops like vegetables, legumes and tree fruits. The BMSB has piercing-sucking mouthparts which extract plant juices and sugars while leaving behind puncture holes. These puncture holes can then cause further damage like scarring and secondary nfections. BMSBs can further contaminate and taint produce by releasing their chemical defense compound as they cling to fruits or vegetables during transport. 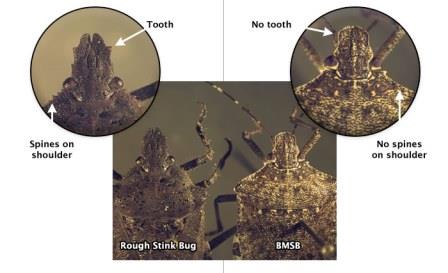 Researchers are currently assessing natural enemy predation and parasitism. Results from an egg parasitism and predator study show that egg parasitism is low and predation is primarily from the big-eyed bug and spined soldier bug. However, in the last year a parasitoid native to Asia, Trissolcus japonicas, was discovered in the United States and was found to use BMSB eggs as a host. Scientists are now further researching Trissolcus japonicas by studying the parasitoid’s rates of parasitism both on BMSB and native stink bug egg masses.

In addition to biological controls, researchers are studying habitat manipulation to further help organic farmers combat BMSB. They are looking at BMSB movement patterns in mixed environments, including wild and cultivated hosts, in order to discover potential aggregation hot spots throughout the season. Identifying movement patterns may help farmers target the location of trap crops or manipulate the habitat unfavorably for the insect. Further research is needed to understand the behavior and host plant selection of BMSB. 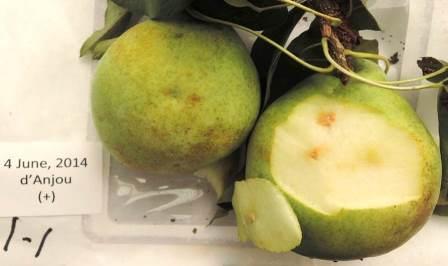 Cultural controls like barriers and trap crops can help small farmers protect their crops if the Brown Marmorated Stink Bug becomes a problem. First, consistent monitoring and correct identification are necessary starting tools to prevent big outbreaks. Once the BMSB has been detected and correctly identified, the best line of defense is to prevent the insect from feeding on host plants by using barriers such as row covers, sticky traps around tree trunks or bagging fruit in small orchards. In vegetable production, researchers are studying trap crops like sunflowers and sorghum. These types of trap crops can be used to attract BMSB populations, therefore keeping them away from and out of cash crops. A preliminary trap crop study conducted in Sacramento found BMSB in high numbers on taller sunflowers. If trap crops are used, Anne Neilson from Rutgers University suggests planting them at least six feet away from the cash crop in order to minimize Oregon Small Farm News Vol. X No. 4 Page 6 insect migration between crops and to allow air flow. Additional studies are underway to continue assessing the prospect of using trap crops as a management tool.

Brown Marmorated Stink Bugs are not easily managed using chemical controls because they are already showing signs of resistance to pesticides. However, BMSB are repelled by essential oils like spearmint, lemongrass, clove and ylang-ylang. The challenge with essential oils is that they volatize quickly, which reduces ongoing protection. Further investigations are needed to look at both conventional and organic chemicals, although BMSB does not readily respond to chemical controls.

This pest has the potential to be devastating and scientists are learning more about its behaviors in order to suggest the best pest management strategies in combating the BMSB. Currently, monitoring and correct identification are valuable tools in assessing infestations. Excluding the pest from agricultural Oregon Small Farm News Vol. X No. 4 Page 7 hosts provides the best pest management tool, so far. Biological control looks promising in the future, but more research is needed to evaluate its impact on BMSB populations. 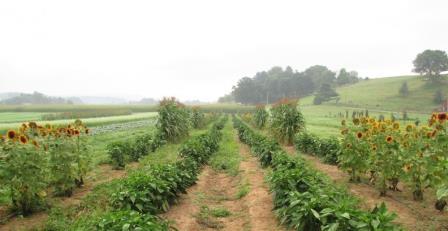