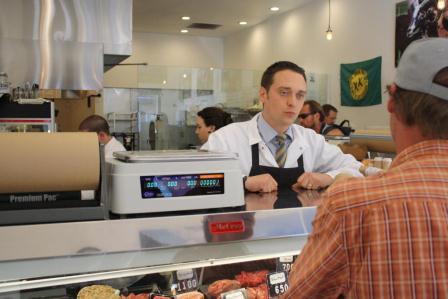 There’s a buzz along the main drag in Ashland, Oregon, where Boulton & Son, a traditional whole-carcass butchery, had its grand opening on September 7th, 2012. This vanguard enterprise felt like a natural extension for local Applegate farmer, Jonathan Boulton, who passionately believes that “you are what you eat”. Boulton started on his farming journey raising heritage Tamworth hogs and Soay sheep after reading a package of Applegate Bacon that was, according to Jonathan, from “somewhere in New Jersey”. The outcome, Iron Age Farms, focuses on sustainable production of heritage breeds, along with a dedication to humane animal welfare and grass-based production.

As Jonathan and his wife, Elisa, became more intertwined with local and sustainable meat production, they encountered the challenges of bridging the gap between product and consumers. Even after trucking their livestock to slaughter 150 miles north, the quality of meat offered to consumers was compromised by limitations of the cutting facility and the fact that as a vendor at farmer’s markets, meat was frozen and could not be cut to order. Boulton describes working with his processor, putting his hand on his shoulder and saying, “I’ve done the best I could to give these animals a good life. Could you see to it that you give them a good death”.

Boulton & Son strives to bridge the gap with consumers by being a “seven day a week, one stop shop for locally grown meat”. The major challenge remains the 300 plus mile round-trip transport to a USDA-licensed slaughter facility. By receiving whole carcass product, however, they retain “complete control over every cut of meat that comes out of the shop”, Boulton states. For Boulton & Son, this is an important aspect in providing the consumer the highest quality experience with locally, sustainably raised meat, while utilizing the entire animal from tip to tail. 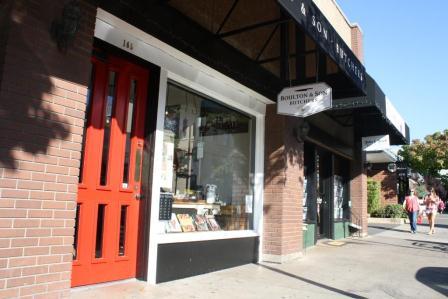 Following the Boultons’ initial conception of the butcher shop over a year ago, Jonathan worked closely with Oregon Department of Agriculture to license the shop as an ODA-inspected “retail butcher shop and non-slaughter processing facility”. A state licensed butcher shop can hang and cut carcasses for retail sale, both at the main shop and at satellite locations, without being USDA inspected, as long as the animals are slaughtered under USDA inspection. The shop is also licensed for additional processing, such as charcuterie and aged meats.

Opening Boulton & Son also hinged on finding a qualified master butcher to do the cutting. The Boultons were lucky enough to recruit Xian Clever from Portland, Oregon, who masterfully breaks down whole carcasses behind a glass viewing window. The close view of butchery in action is all part of Boulton & Son’s necessary mission to educate the consumer.

Bringing in whole carcasses means utilizing and selling every part of the animal. According to Boulton, “we need the consumer to work with us. Our commitment not to call Cisco and get a box of plastic-wrapped who knows what, means we might not have filet mignon every day”. For instance, if Boulton & Son brings in two hogs a week, that’s only 4 tenderloins for sale until next week. Towards that end, Boulton & Son is offering classes in cooking different and substitute cuts of meat under the tutelage of Elisa Boulton, a cordon bleu graduate. As a community butcher shop, Boulton & Son also holds classes in butchery, charcuterie, baking, and utilizing animal bi-products, such as in soapmaking.

Another aspect of Boulton & Son’s mission is to connect the farmer with the consumer, offering profiles of its primary, ultra-local suppliers and educating clients about humane and sustainable production. They support farmers’ heritage breeds and bring in Dexter cattle, whose small frame is ideal for grass-based production and the heavy clay soils of the Rogue Valley. Buying animals from farmers off the hoof, in an area without a livestock auction or nearby slaughterhouse, provides local farmers with a consistent and predictable market. As Boulton says, “this is more than just a business. It’s part of an ever-widening, deepening movement”. 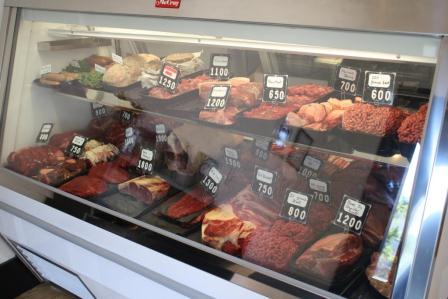 Customers at Boulton & Son seem to agree. The initial shop opening was precipitated with a wide-spread kickstarter campaign, which raised $10,000 from 119 community members. In their first week of opening, the shop sold two steers, pushing them to get more product from backup suppliers. “People can really resonate with the vision and mission,” Boulton says. Boulton & Son join a smattering of whole carcass butcheries around the country, bringing a traditional, local flavor to a small town apparently hungry for it.